In the past 18 months, Toronto has become a magnet for artificial intelligence researchers, drawing some of the field’s leading figures to set up labs here. Popular narratives suggest this brain gain will cement Canada’s largest city in the top tier of global tech centres. But look beyond the hype, and warning lights are flashing that Toronto is headed in a different direction – more ivory tower than economic power. Toronto has to get better at turning its AI research into products customers want to buy – before somebody else does.

Toronto has been developing a base of world-class research since the 1980s, including the Canadian Institute for Advanced Research, the University of Toronto and, most recently, the Vector Institute. Now, hardly a month goes by without an international company establishing a new office here. Samsung has opened an AI centre. Uber is working on self-driving cars. And LG Electronics just signed a five-year research partnership with U of T.

But to see the problem, look for what’s missing. Where are the stories about Canadian companies commercializing the fruits of this intellectual labour? Too many of our startups are developing AI-based technologies with the aim of being acquired by one of tech’s giant companies or to simply secure another hefty research grant. There’s too little push to create real products that deliver results for real customers and win in global markets.

Leading names in Canada’s tech industry, such as Jim Balsillie, frequently complain about Canada’s habit of funding basic research then standing by as foreign companies swoop in to take the intellectual property. Toronto is at risk of falling into the same trap on AI.

The goal has to be commercialization. That’s the only way to create jobs, wealth and a virtuous cycle of reinvestment here in Canada.

This requires a cultural change. That means understanding our strengths and, as with other cities, carving out specialized niches. New York is already a leader in commercializing AI with e-commerce applications. The Letgo app, for instance, allows busy New Yorkers to purge clutter, leveraging AI to prepare online ads for stuff they want to sell just by snapping a picture of it. London, meanwhile, is a centre for commercializing AI in financial technologies and services, with companies such as TransferWise, which lowers customer costs for online money transfers and has created a new AI-powered “chatbot” that syncs with Facebook.

Toronto’s opportunity could lie in the emerging enterprise AI market, a sector with no established global centre of excellence. Enterprise software forms the backbone of business’s daily operations. It’s the programs that customers use to interact with companies, and that firms use on the back end to manage inventories, logistics, payrolls and the like. For decades, this involved expensive proprietary licences for programs and row after row of on-site servers.

These enterprise programs were reliable revenue generators for legacy companies such as IBM, HP and Oracle, which could also make big money off of the physical infrastructure their customers needed to operate. Now, most of the spoils go to the giants such as Microsoft, Google and Amazon.

But these companies don’t offer everything. There’s a real possibility that properly funded and sufficiently ambitious startups could simply leapfrog these companies, taking the lead by offering a novel business solution. In other words, nimble startups can take on what the tech giants have been too busy to notice.

We should be betting strongly that Toronto is where these companies will be based.

Some local AI-centric companies are already creating breakthrough products. Deep Genomics is revolutionizing genetic medicine; Wattpad’s software delivers powerful storytelling to a global community of 65 million users; and Kitchener-Waterloo’s Clearpath Robotics automates some of the world’s most dangerous jobs. I consider that we’re also in this category at Rubikloud, building AI-powered systems for the retail industry. But we need more companies like these.

I believe Toronto’s AI startups only have two or three years to show they can successfully commercialize products before investors start getting nervous and the venture capital money dries up. A solid first step would be to get better at communicating to markets what’s in their pipeline, which would build confidence that the hype will be matched by products.

We also need government, the media and business to stop measuring success by how much funding is flowing into AI labs. The true indicator is how quickly our companies turn that research into revenues. If they don’t get faster, our ivory tower will soon look like a house of cards.

Kerry Liu is chief executive of Rubikloud, a Toronto-based company applying AI in the retail industry. 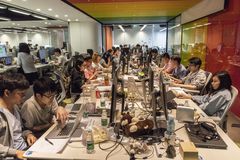