It was called Project Fear. In the 2016 Brexit referendum, when Boris Johnson was mayor of London – he’s now Prime Minister of the United Kingdom – he used the term to accuse the pro-European Union crowd of scaremongering, insisting the “agents of Project Fear” were making fake predictions of economic calamity should Britain go it alone.

There would be no calamity, he and his supporters said. Britain was a plucky country that would strike trade deals with everyone and rule the waves once again. Pip, pip!

He was right, more or less. The economy did not collapse after the Leave side won. Unemployment kept falling, reaching its lowest level in more than four decades. Wages rose. Yes, the pound sank, but its cheapo status acted as a cushion, making exports cheaper and reducing the relative cost of, say, British computer programmers.

He was right in good part because Brexit was still theoretical. True, a majority of Britons had voted for it, but a majority of MPs opposed it. Brexit kept getting delayed. Anything could happen – new party leaders, a new election, a new referendum. Brexit would fade away like a bad dream – or so the Remainers hoped.

Brexit, of the hard, no-deal variety, went from theoretical to probable on July 24, when Mr. Johnson replaced the hapless Theresa May as prime minister. Britain’s exodus from the EU would happen “do or die” by the end of October, he said. This week, he suspended Parliament for five weeks – a profoundly undemocratic act from the unelected premier of a minority government to ensure the outcome of the democratic referendum would be made good.

The bad news for Mr. Johnson is that Project Fear, which never quite went away, is back, thanks to Mr. Johnson’s hit-the-road deadline. And this time, the doomsayers may be right.

Even before he became Prime Minister, there were compelling signs that the British economy was sagging. It may be in recession. In the second quarter, Britain posted its first three-month economic retraction since 2012, when the European financial crisis was still raging. In the three months to June, unemployment ticked up to 3.9 per cent from 3.8 per cent. A new household survey indicated that consumer confidence is evaporating as Brexit approaches, nearing its lowest level since 2011. Thousands of luxury apartments in London lie empty despite the weak pound.

The hard reality of Brexit means that none of these indicators is going to get better any time soon and all of them stand to get a lot worse. For Europe’s industrial bosses, Brexit is a blessing in disguise because virtually every industry, from making cars to prefab houses, suffers from overcapacity.

With Brexit coming, industry has found political cover to kill off British factories before those on the continent. The car industry, where production has fallen for 14 consecutive months, is already vanishing at an alarming rate in Britain. Ford and Honda are closing their plants there. Nissan is not expanding production at its factory in Sunderland. The country’s automotive ecosystem is crumbling.

The hit to financial services will be much greater. The trickle of jobs from London to Frankfurt, Amsterdam, Paris, Dublin, Milan and New York could turn into a flood. Every big company had contingency plans for a Brexit that they did not want to use. Now those plans are being put into place. EY’s financial services Brexit tracker said in June that 41 per cent of the companies it follows have confirmed plans to move some financial jobs to the EU. And June was another era, when Brexit was far from certain. The next EY number could be a shocker.

Meanwhile, you can bet that the devious regulatory gnomes in Brussels will do everything they can to downgrade London’s status as the leading international financial centre. Why wouldn’t they? EU membership had its privileges, and those privileges will be taken away after Brexit. Euro clearing and equities trading are bound to migrate to the continent, perhaps by decree, and there is a precedent for repatriation: A few months ago, Switzerland blocked the trading of Swiss shares in the EU (Switzerland is not an EU member).

Mr. Johnson’s suspension of Parliament is extremely bad news for London because it means a crucial financial services bill probably will not be enacted – there is no time. That bill would enable the British government and regulators to continue to implement any EU financial rules in the works for up to two years. It was designed to minimize the disruption of financial services under Brexit. Now, disruption seems inevitable.

Brexit is coming at an especially bad time, economically speaking, for Britain and Mr. Johnson. The global economy is slowing down. The bond-yield curve is inverted (meaning short-term rates are higher than long-term rates). Historically, an inverted yield curve has been a reliable forecaster of recession. Argentina just defaulted on its debt. The German economy shrank in the three months to June as Donald Trump’s trade war spread widespread damage. Brexit could tip Germany and Italy, Europe’s two big exporters, into full-blown recession.

A flurry of grim economic news around the world might well suit Mr. Johnson. If Britain goes into the economic toilet after a no-deal Brexit, watch him blame exterior forces that he cannot control. He and Britain will pay a big price, potentially for many years, to deliver on his promise. 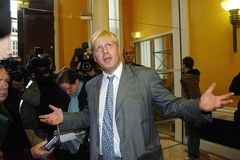 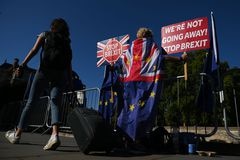 On Brexit Fantasy Island, democracy is the first casualty
August 28, 2019 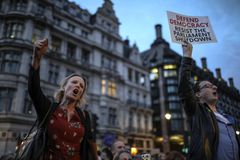