Finance Minister Bill Morneau has signalled that Canada may have to lean on government spending, rather than interest rate cuts, to help the economy weather the next recession. That won’t be welcome news to critics of his government’s established capacity to spill red ink.

But better him than us, I say.

Earlier this week, Mr. Morneau said that with interest rates at historically low levels, the Bank of Canada won’t have a lot of room to help stimulate economic activity in the event of a downturn. It will be up to fiscal measures – increased spending, which implies increased deficits – to carry the load.

On its face, this is hardly great news coming from a Finance Minister who has presided over almost $80-billion in deficits in his government’s first four years in office – and is on track to add another $85-billion over the next four. The message would seem to confirm the worst fears of balanced-budget purists: If the economy goes south, the Liberals’ propensity for throwing money at a problem is going to plunge us into a very deep fiscal pit.

While those concerns are not without merit, we must consider the alternative.

Effectively, the choice between fiscal stimulus (government spending) and monetary stimulus (interest-rate cuts) is a choice of whose debt you want to increase in order to fund spending to lift economic activity. In the case of interest-rate cuts, the objective is to encourage consumers – Canadian households – to borrow at low cost and spend that money. In the case of government spending, you’re asking the public balance sheet to bear the burden. It doesn’t have to be all one or the other, but the emphasis will determine who has to shoulder the bulk of the additional debt once the recessionary smoke clears.

“There’s a choice there to be made about which pile of debt you want to increase, and that’s dependent on where you are in the economy,” Bank of Canada senior deputy Governor Carolyn Wilkins said in a news conference last October.

And where we are in the economy is tipped dramatically toward consumer debt. It is the part of the national ledger that can least afford to shoulder the next recession.

In the third quarter of 2019 (the most recent data available), Canada’s ratio of household debt to disposable income – the go-to measure for consumer debt load – was 176 per cent, just a shade below the record of 178.5 per cent hit in the first quarter of 2017. The debt-to-income ratio has hovered near that record for almost four years now, and the Bank of Canada has identified household debt as the biggest vulnerability for Canada’s economy and financial system. A recession could quickly turn this vulnerability into a big problem – at the very least, deepening and prolonging a downturn.

On the other hand, Canada’s debt-to-GDP ratio (which is, essentially, debt relative to the income of the entire national economy) is 31 per cent – considered low by international standards. Even with the current government’s deficit-spending trajectory, economists at the Bank of Canada and elsewhere view the federal debt as easily manageable and economically benign.

It’s clear, then, where the policy emphasis should land in the event of a major economic shock or slide into recession. Government debt has room to expand. Household debt does not – and it’s fraught with risk.

Of course, government spending would have even more room to stimulate an ailing economy if Mr. Morneau had not overseen a spending spree that has entrenched $20-billion-plus deficits into a federal budget that was in balance when the Liberals took the reins in 2015. The government is allowing the debt-to-GDP ratio to actually drift higher this year and next – during an economic expansion that is near peak capacity.

There was a hint in Mr. Morneau’s comments this week that the government is seeing the light.

“We need to always maintain a strong balance sheet, always maintain the ability to make those investments,” he said, adding, “That’s one of the key objectives that I’m working toward and that the Prime Minister has asked me to work toward in how I move forward with the [2020] budget.”

That may signal an emerging resolve to rein in spending with this spring’s budget, with an eye on conserving fiscal ammunition for the next downturn. We may well need it. We simply can’t afford to leave it up to the consumer again. 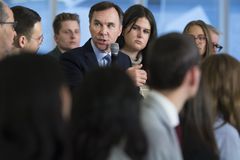