The details of the dismal April employment report speak volumes about who is being hit hardest by the COVID-19 shutdowns. But they also illustrate what a critical – and, so far, pretty successful – job the Canada Emergency Response Benefit (CERB) is doing in sustaining our dormant economy.

It didn’t take long for analysts poring over last Friday’s report from Statistics Canada to notice the one data point that seemed incongruous with the rest of the misery: Even as employment plunged by two million jobs in a single month, the average hourly wage surged an astounding 10 per cent.

Statscan was quick to explain that this statistical quirk had much more to do with the jobs that were lost, than with any sudden swelling of the pay envelopes being handed to those who are still on the job. The bulk of the massive job losses from COVID-19 have been at the low end of the pay scale: workers in restaurants, hotels and retail stores, and those relying on gig work. The people who can least afford to lose their jobs – or, in many other cases, have their hours dramatically reduced – are the ones bearing the brunt of the COVID closings.

Economists Tammy Schirle of Wilfrid Laurier University, Kevin Milligan of the University of British Columbia and Mikal Skuterud of the University of Waterloo wrote in a commentary for the C.D. Howe Institute that for workers earning $15 an hour or less, total weekly hours worked are down more than 50 per cent from (precrisis) February. For those at the other end of the pay scale, earning $40 an hour or more, hours worked are down a mere 6 per cent.

David Macdonald, senior economist at the Canadian Centre for Policy Alternatives, said that among workers who earn $16 an hour or less – a group that makes up 20 per cent of the national labour force – half of them have either been laid off or lost the majority of their hours.

This is, obviously, a problem. But it is also a sign that CERB is a particularly well-suited solution.

At 33 hours a week – the average hours worked by workers in February, according to Statscan data – a $16-an-hour employee earns gross weekly income of $528. CERB recipients receive $500 a week. The program is, more or less, fully replacing the lost income of the population most affected by the shutdowns – who are also the people who most need the help.

While the Trudeau government has stressed from the start that its priority was making sure people could stay in isolation while continuing to pay the rent and put food on the table, the economic wonks in the Finance Department also had a broader economic objective in mind when they were developing CERB. They wanted to replace the income that was being lost not just by affected individuals, but by the entire economy. The numbers suggest it has been doing just that.

Doug Porter, Bank of Montreal’s chief economist, noted in a research report that total weekly pay throughout the Canadian labour force is down 22 per cent from February levels, which works out to about $4-billion a week in income that has evaporated from the economy.

At last count, 7.8 million Canadians have applied for CERB. At $500 a week, a back-of-the-envelope calculation suggests that the program is paying out $3.9-billion a week in income aid. The program is covering nearly all the income that has been lost to the shutdowns.

That income replacement will go a long way to sustaining the capacity for household consumption – something that, with this scale of job losses, would certainly collapse in the absence of the CERB supports. It’s no exaggeration to say that this program is steering us away from the quickest road to a deep recession.

There is, of course, a big problem on the other side of the consumption equation. Mass retail closings, travel restrictions, etc., have greatly reduced places for consumers to spend. The rise of the country’s savings rates during the pandemic is testimony to the lack of avenues to consume at the moment.

But even here, the skewing of the work-income losses toward the low end will serve to maximize the effectiveness of CERB. Low-income workers typically spend a larger proportion of their pay on necessities, such as food and shelter, with little left for saving. The replacement of their lost wages by CERB will keep their consumption largely intact.

Obviously, having the government step in and fill a large segment of missing economic activity to the tune of nearly $4-billion a week is far from ideal. But as emergency measures go, the data suggest that this one is hitting its mark. 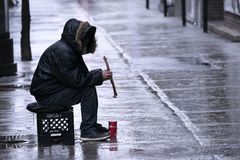