The energy storage market is a battlefield, littered with the corpses of failed newcomers that underestimated how deeply entrenched lithium-ion technology would become.

We’re talking 95 per cent entrenched, a market position growing stronger as demand for electric vehicles, wireless devices and cordless tools rise. Costs continue to plunge, with “gigafactories” and “Chinafication” driving the same economies of scale that turned solar photovoltaic panels into a commodity.

This has researchers at the Massachusetts Institute of Technology worried about “technology lock-in.” Their fear, outlined in a recent white paper, is that lithium-ion has become so dominant that it is preventing newer, better battery chemistries from getting funded, gaining market traction and achieving the scale needed to survive, let alone compete on cost.

Why the concern? Because lithium-ion batteries, great for use in Teslas and iPhones, fall short as a storage solution for solar and wind energy, for balancing supply and demand of electricity on the power grid, or for helping big power customers avoid costly peak-time charges by shifting their energy use.

Yet this is what they’re increasingly being used for, not because they’re the best batteries for the job, but because mass production has turned them into the cheapest.

That hasn’t stopped several Canadian start-ups from trying to crack the lock, using a combination of chemistries based not on lithium, but on zinc – that stuff we use to rust-proof steel and fight colds. Glencore and Teck Resources are some of the zinc miners closely following their progress.

Salient Energy from Kitchener, Ont., for example, is building what it describes as the world’s first rechargeable zinc-ion battery. Toronto-based e-Zn has developed an “electrochemical reactor” that stores electrical energy in particles of zinc metal. In Vancouver, a company called ZincNyx Energy is getting ready to deploy a zinc-air flow battery at a demonstration site in New York .

Their approaches may differ, but all three argue that zinc should be the metal of choice for large-scale, stationary storage, a market projected to double in size six times and attract US$103-billion in investment between now and 2030, according to energy research firm Bloomberg NEF.

As a core battery material, zinc is attractive because it’s plentiful, geographically dispersed and far less expensive than lithium. The market price of zinc sits at about US$2,500 a metric ton, versus US$16,000 for lithium and more than US$80,000 for cobalt, the two main – and scarcer – metals used in lithium-ion batteries.

“They don’t have enough lithium and cobalt in the world to meet just the forecast demand for electric vehicles,” says Ryan Brown, chief executive officer of Salient. (There’s also the fact that most of the world’s cobalt comes from the Democratic Republic of Congo, where child labour and human rights abuses are a sad reality).

There are other advantages to using zinc-based batteries. They’re more easily recycled. They’re safer and not at risk of the kind of “thermal runaway” reactions that, while uncommon, have seen lithium-ion battery packs in laptops and cars burst into flames.

New breakthroughs also make them less vulnerable to degradation as a result of “dendrite buildup” on anodes during charging – the battery equivalent of what plaque buildup does to arteries and blood flow. This means zinc-based systems can potentially last much longer than lithium-ion technology, an important factor in any grid investment.

E-Zn, for example, uses a mechanical process to routinely strip away dendrite, like a windshield wiper. “There’s no degradation in capacity over time,” says James Larsen, the company’s CEO. The other advantage is that the system can operate in extreme temperatures. “Energy storage in northern communities in Canada or the Caribbean Islands typically requires large facilities with air conditioning or heating systems. That increases cost and reduces efficiency.”

The company is initially targeting remote communities looking to replace diesel generators by pairing wind and solar with energy storage, taking advantage of the fact that its system can more affordably store energy for long durations – up to several days if necessary. It believes it can, with the benefit of scale, do it for less than half the cost of using lithium-ion battery systems.

But how do they achieve the scale to compete? Herein lies the crux of the problem. Billions of dollars of investment continue to flow into lithium-ion battery manufacturing, driving down costs even further. It’s easier and cheaper right now to package lithium-ion cells into big systems that get the basic job done, than it is to build new manufacturing lines for a completely new battery chemistry that does the job far better.

Salient Energy has its own way around this problem. It has purposely designed its zinc-ion batteries as a direct replacement to standard lithium-ion cells by using the same manufacturing processes. “Once we get this technology right, we can go out to any lithium-ion manufacturer and say, ‘Hey, if you make our battery it will perform better and the material costs will be much less,’” CEO Mr. Brown says. “It will mean we can instantly scale around the world by plugging into existing infrastructure.”

It’s the kind of innovation that has analysts like Jon Hykawy, president of financial consultancy Stormcrow Capital, bullish about zinc.

“We believe zinc is entering a new phase of use,” he wrote in a recent research report, describing the otherwise boring base metal as a “high-technology material that may well help change how we use energy in the society of tomorrow.”

Canadian entrepreneurs are leading that effort. 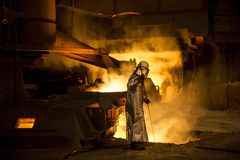