Dimitry Anastakis and Laurence B. Mussio
Contributed to The Globe and Mail
Published September 28, 2020 Updated October 20, 2020
Comments
Text Size
Please log in to listen to this story. Also available in French and Mandarin. Log In Create Free Account

Dimitry Anastakis is a professor at the University of Toronto; Laurence B. Mussio is a business historian and author.

Anyone who surfs or scrolls through the sea of bad news on Twitter or other social-media platforms might be tempted to believe that Winston Smith, the tortured protagonist of Nineteen Eighty-Four, might see in our own moment strong parallels to George Orwell’s archetypal dystopia. All he’d have to do is get an iPhone and unlimited data to prove it.

But in our world, it’s not Big Brother or an all-pervasive state that’s the only problem: it’s the institutional tech behemoths of Facebook, Amazon, Apple, Netflix and Google (Alphabet), known as the FAANGs.

Our technological moment offers other upgrades. Instead of imagining Nineteen Eighty-Four’s future as “a boot stamping on a human face – forever,” as O’Brien, a character in the Orwell novel, describes it, it might be – as Julian Assange argued in 2013 – “Washington-backed Google Glasses strapped onto vacant human faces – forever.”

In spite of how Nineteen Eighty-Four ends, with the triumph of power, novelist John Crowely noted Orwell himself knew that “people, real living people … would simply not give into the Nineteen Eighty-Four model, not for long.” People, and history, have ways of rewriting our darkly imagined dystopias.

In our world, Big Tech is powerfully challenging that assumption. A handful of gigantic U.S. corporate entities exert a remarkable degree of influence over stock markets, commerce and the flow of information. The pandemic has only added to their market and cultural power. Some act with near-sovereign authority in promoting their own agendas and silencing others. As Harvard scholar Shoshana Zuboff has argued in her remarkable book, The Age of Surveillance Capitalism, the power of tech companies moves well beyond concerns over the control of commodities, print media or even software to strike at the very heart of human behaviour and democracy itself.

The question of monopoly control, of trust and antitrust, is at the centre of the North Atlantic world’s public policy debate. In the United States, the Justice Department is preparing a spectrum of antitrust suits against Big Tech. Congress’s excoriation of the Four Horsemen of the Tech Apocalypse (Jeff Bezos, Tim Cook, Sundar Pichai and Mark Zuckerberg) makes for riveting and oddly satisfying theatre. The European Union casts a regulatory net to blunt the FAANGs. By contrast, Canada is left to work out its own salvation as an outsider to these regulatory blocs.

None of these questions are new; the particulars may be different, but the debates are remarkably similar. How much power and control do we allow corporations or governments to exert? What is the role of government in all this? How does public policy balance the awesome power of technology to generate wealth without producing winner-take-all outcomes?

Debates over corporate control of the economy are as old as capitalism itself. Here, insights from our collective past are important in understanding how the domination of Big Tech is both similar and different to the past.

After 1945, monopoly concerns shifted to giant manufacturing and traditional media companies. Until the 1970s, U.S. administrations looked askance over General Motors' control of over half of the car market.

Starting in the 1970s, technology companies sparked questions of whether firms were too big or powerful. IBM’s mainframe computing domination gave way to Microsoft/Intel’s personal-computing duopoly. Few people remember Bill Gates bailing out a failing Apple in 1997 with US$150-million, largely to avoid Justice Department scrutiny of his company’s domination of the operating system market.

These examples appear almost quaint to contemporary eyes, especially when confronted with the idea that the product isn’t a Chrysler – it’s your personal data and human behaviour. But each of these cases has its own set of insights on what we got right and what we got wrong in the past. So, what do they tell us?

First, recognizing and publicizing the problem is essential in challenging these giant firms. Muckraker Ida Tarbell’s 1904 exposé of Rockefeller’s unfair practices galvanized the issue in the U.S. That element seems well under way.

Second, as Kevin Lynch and Laurence B. Mussio noted in Policy Magazine in 2019, “designing regulatory policies that target unacceptable market and societal outcomes but do not hamper innovation and entrepreneurship” should be the No. 1 job of public policy. Principles-based regulation and collective codes of conduct, supported by legislation, may strike the right balance. Public policy needs to act, and act strategically. In the 1970s automotive sector, government policies encouraged offshore car manufacturers to enter the U.S. and Canadian markets, effectively breaking the Big Three oligopoly. It’s a good example of the possibilities in expanding choice for consumers while managing economic imperatives.

Third, Canada should, as it has in the past, shape its approach to Big Tech through its own aspirations and experience, one necessarily different from the U.S. or EU. At the same time, transnational regulatory co-operation, co-ordination and advocacy for global data and digital standards is absolutely critical.

In 1946, Orwell observed that predicting a “continuation of the thing that is happening” – invincible, everlasting – is a fundamental ahistorical error, whether it’s Soviet domination or the ascendancy of a handful of powerful companies. This key Orwellian lesson can apply to Big Tech and the challenge it poses. Above all, what our long-run experience shows is societies – markets, governments, people – have the power to shape their economic and technological environment. Whether citizens and governments exercise that power shrewdly is another matter. Such outcomes are within our reach, if not within our grasp.

Amazon to add another 3,500 employees to its Canadian work force
Subscriber content
September 28, 2020 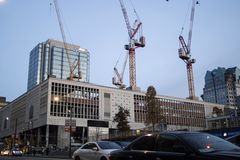