Ontario’s new government had better be more innovative at managing fiscal policy than it is at spinning it.

On Friday, Premier Doug Ford’s Progressive Conservatives reached into a very well-worn political playbook when they reported that having examined the province’s finances, they discovered that – gasp! – the previous Liberal government had left the books in much worse shape than previously thought. The commission the government struck to look into the matter now says Ontario is on track for a $15-billion deficit in the current 2018-19 budget year, more than double the $6.7-billion shortfall foreseen in the Liberals’ budget last spring.

Any voter who has seen a few election cycles in this country will recognize the pattern here. Run an election campaign making many wild and expensive promises, while pledging to be fiscally responsible and somehow balance the budget somewhere down the road. Win the election. Take a look behind your defeated foe’s financial curtain and grimly announce, shaking your head and/or wagging your finger, that you got stuck with a much bigger deficit than your predecessors had led you, and the voters, to believe.

Presto – now you have a built-in excuse for the next four years to either renege on some of your promised campaign goodies or drag your feet on eliminating the budget deficit, or both. Hey, it’s the other government’s fault, you can say. We’re just trying to clean up their mess.

In this instance, the new government’s profession of shock and outrage is particularly disingenuous: It knew before it even ran its election campaign – indeed, before it formulated its platform – that this was the state of Ontario’s finances.

The commission’s analysis of the provincial finances essentially takes last spring’s Liberal budget – which Mr. Ford and company panned – and bakes into it two sizable accounting issues that were in dispute between the previous government and its Auditor-General, Bonnie Lysyk. The issues involved the treatment of public-sector pension assets and costs related to the Liberals’ plan to reduce electricity prices. By adopting the Auditor-General’s recommendations, those two items alone increased the budget deficit by $5-billion. But then we all knew it would – Ms. Lysyk had said so in her report issued in late April, two weeks before the election campaign even began.

A few other nips and tucks to the Liberals’ budget brought the deficit from the $11.7-billion that Ms. Lysyk had calculated in her report to the $15-billion the commission came up with. Many of them are debatable – a lowering of the economic growth forecast based on a slow start to the year; the removal of $1.4-billion in unspecified savings the previous government had said it would find over the course of the budget year, which had barely begun at the time of the election; an increase in the contingency reserve built into the budget. But regardless, the difference between $11.7-billion and $15-billion is pretty negligible in the world of budget estimates. This is essentially the Liberal budget, with the Auditor-General’s widely reported accounting differences added in.

Whether you believe the former Liberal government was using accounting smoke and mirrors to make its books look better or that it had a legitimate argument for its accounting treatments is neither here nor there. The fact is the new government hasn’t uncovered a meaningfully larger deficit than it had known about the day the budget was tabled. This wasn’t an announcement, it was a performance.

Now comes the much harder part: actually dealing with it rather than simply railing about it. And if the Tories have a plan to do that, they sure haven’t told anyone.

In fact, the long list of promises the PCs paraded out during the campaign – most notably, a wide range of tax cuts – would collectively add about another $6-billion to the deficit. Mr. Ford has talked vaguely about eliminating “inefficiencies” in the public service to not only pay for his promises but bring the budget into balance. At $20-billion-plus, that’s an awful lot of inefficiencies to eliminate.

More likely, the Tories will either have to back away from its election promises or kick the commitment to balancing the budget as far down the road as possible. If they do either, they face losing the trust of the voters who elected them. If they do neither, they will have to make deep, painful cuts to programs – the kind that involve eliminating services and firing large numbers of civil servants.

Mr. Ford and his colleagues may think of Friday’s deficit reveal as a landmark achievement in their quest to shame their predecessors. In reality, they have publicly declared an end to their own honeymoon period as a government. From this point, whatever they do – or fail to do – to address the fiscal hole they were so eager to expose will alienate someone who helped elect them. 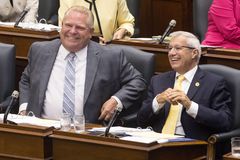