It’s easy to dismiss George Soros, the Hungarian-American billionaire, philanthropist, onetime hedge fund manager and Europhile as an aging blowhard and doomsayer. For years he has moaned about the existential crisis facing the European Union and the euro zone, yet both remained intact.

But his warnings became credible two years ago this month, when British voters chose Brexit. They are even more credible now that the two most powerful parties in Italy, the euro zone’s third-largest economy, have declared no love for the euro. The stumbling but ultimately successful efforts this week by the Five Star Movement (M5S) and the League to form a populist government plunged Italy back into a debt crisis – though an apparently short-lived one – and rattled bond and equity investors around the world.

In a widely covered speech in Paris on Tuesday, Mr. Soros was characteristically blunt. He said “The EU is in an existential crisis” – he likes the two latter words a lot – and that “everything that could go wrong has gone wrong.”

I share Mr. Soros’s view that “Europe” – it wasn’t clear whether he was referring to the EU or to the euro zone or both – “needs to reinvent itself.” I doubt, however, that either will blow up any time soon. The EU can certainly survive Brexit, and may be well rid of a country that was always a half-hearted member of the union. Britain kept its own currency and opted out of the Schengen passport-free zone and any of the security, justice and freedom legislation that it did not like.

The euro zone is a different matter. It really does need to reinvent itself. The euro zone, made up of 19 of the EU’s 28 member states (27 after Britain leaves the EU next year), is too fragile to keep taking so many blows. The formation of a Euroskeptic, anti-establishment government in Italy, which seems inevitable, may not kill it off, but it could. Note that M5S and the League are already toying with the idea of launching government-backed IOUs that could evolve into a parallel currency.

The euro zone is fragile because it expanded too far, too fast. When the euro was launched in 1999, it was used by 11 countries, including Germany, France, Italy, Austria, Ireland and Spain, which was probably four or five too many. Two years later, Greece fudged its books to gain entry. If there was one country that should have never joined, Greece was it. How could the designers of the euro possibly imagine the same currency working in Germany, arguably the most successful economy in the world, and Greece, which has been a wealth-destruction machine for a decade and would have crashed out of the euro in 2010 were it not for the first of its three bailouts. Since then, another seven countries have joined the euro zone.

The concept of a currency union would make sense if that union were a United States of Europe, where the economic integration of countries of more or less equal strength was joined by political integration. Instead, the empire-mad architects of the euro, backed by the empire-mad European Central Bank, embraced bigness for the sake of bigness. Suddenly, weak banks in weak countries were able to extend credit in an overvalued currency, the euro, to any taker.

The euro zone’s enlargement was faulty because it created a currency union characterized by too much economic and political diversity. Too much diversity meant no U.S.-style federation was possible. No federation meant the use of the same currency in 19 wildly dissimilar countries was an accident waiting to happen. Imagine a North American central bank that joined the currencies of Canada, the United States and Mexico. The union of Canada and the United States might make some sense, given the tight integration of the two economies and similar levels of wealth; the union of all three would be absurd.

The euro also introduced a set of institutions that would become unacceptable to the poorer parts of the euro zone. During the crisis years, the ECB was part of the Troika – the bailout team composed of the ECB, the European Commission and the International Monetary Fund – that demanded crushing austerity in Greece and, to a lesser extent, Italy, Spain and Portugal.

The harsh austerity measures boosted resentment among the Mediterranean countries toward the euro and its power structures. Many Greeks and Italians, and the populist parties that came out on top in March’s Italian election, believe the use of the euro has forfeited their sovereignty to the ECB and to Germany, which has been the prime – and perhaps only – unequivocal beneficiary of the currency.

No currency union in the past 2,000 years has survived. The Bretton Woods agreement, the near-global monetary order that tied external exchange rates to gold, did not survive (born at the end of the Second World War, it died in 1971, when Richard Nixon ended the U.S. dollar’s convertibility to gold).

The euro faces a similar fate. To survive, it might have to revert to a core group of countries – perhaps Germany, the Netherlands, Belgium, Austria, Luxembourg and France – that are comfortable evolving into a deeply integrated federal state. But the ECB is unlikely to put up the white flag and retreat any time soon. Only a massive crisis, such as Italy leaving the euro zone, would force it to overhaul the architecture of the currency union.

Mr. Soros is right – Europe needs to be reinvented. But he is wrong to assume Brexit is the main problem. It’s not. The main problem is a common currency that got too ambitious for its own good. 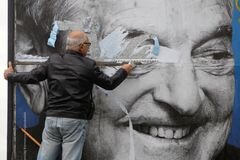