Barrick Gold Corp. had promised to usher in a new era of discipline in gold mining when it announced a blockbuster plan to take over U.S. rival Newmont Mining Corp. in a US$17.8-billion deal.

Now that it has dropped its major offensive, one of the industry’s chronic problems – excessive executive pay – has bubbled up again. This time, the target of investor wrath is Ian Telfer, chairman of Goldcorp Inc.

Mr. Telfer stands to pocket US$12-million in Goldcorp’s sale to Newmont – a deal that predated the Barrick-Newmont proposal and could have been scrapped because of it. That’s nearly three times what had been reported as his retirement package before last week. Following the steady deterioration in the company’s stock price over the past decade, it has Goldcorp investors spitting fire.

The Shareholders Gold Council, formed by prominent institutional investors last year to agitate for more alignment of corporate performance and executive pay, blasted the windfall as “another showcase example of directors choosing cronyism over the interests of shareholders.”

The reaction is wholly rational. Goldcorp’s and Newmont’s boards risk palace revolts if they do not revisit the lavish award, billed in the takeover documents as a retirement allowance, even though Mr. Telfer will have a role at Newmont as deputy chairman.

It’s not the only big potential payday. Goldcorp could shell out US$33.2-million in cash to 26 executives who may be sent packing as a result of the Newmont deal, including chief executive David Garofalo.

To back up, Vancouver-based Goldcorp agreed in January to be absorbed by Newmont in a US$10-billion deal. Goldcorp investors are being offered shares and a little bit of cash. They had ridden the stock ever lower and it was selling close to a historic nadir under $13. Even now at $14.86, supported by Newmont’s bid, Goldcorp is worth 27 per cent of what it was at a peak in 2011.

The whole plan faced an existential threat in February, when Barrick – recently expanded through its merger with Randgold Resources Ltd. – uncorked an all-share bid for Newmont. That plan to combine the industry’s top two players offered no premium for Newmont but promised US$7-billion in cost savings through combining operations and management.

Such consolidation, proffered by Barrick CEO Mark Bristow, was welcomed by those who have lamented the mining industry’s inefficiency coupled with compensation packages that had become out of whack with share performance.

The catch? Barrick said Newmont would have to drop its bid for Goldcorp, and leave its weary shareholders in the lurch. In the end, it never got that far.

This week, Barrick agreed to abandon its bid and instead forge an alliance with Newmont to combine their operations in Nevada. It is not known if that was the main goal all along, but now Newmont can stick with Plan A, its takeover of Goldcorp. For the price, Newmont adds mines in Canada, Mexico and Argentina. It would also snap up a stake in Pueblo Viejo, a giant mine in the Dominican Republic that Goldcorp co-owns with Barrick.

Mr. Telfer joined Goldcorp 14 years ago when it bought Wheaton River Minerals. In 2006, after a short stint as CEO, he became chairman. It wasn’t a formal executive chair role, though he has been active in the business alongside the company’s executives. Goldcorp said it approved the increase in payout because, as chairman, he “relinquished entitlement to benefits he would have otherwise been entitled to receive as an executive, including participation in the various executive incentive plans.”

Perhaps, but the company will have a hard time convincing its investors that it is warranted given the fact that Goldcorp is being sold for a fraction of what it was once worth.

The deal means some hope for shareholders who have held on through the company’s toughest years, though with no guarantees, their loyalty will be rewarded. The board is offering much better prospects to its own.

Goldcorp criticized for additional payment to chairman in wake of Newmont deal
March 11, 2019 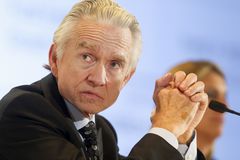