After lambasting Ontario Premier Doug Ford’s climate policy while they campaigned for re-election last fall, Justin Trudeau’s Liberals are considering whether to approve one of that policy’s key components.

The question soon to be put to the federal cabinet is whether an industrial carbon-pricing system proposed by Mr. Ford’s government is close enough to national requirements for Ottawa to stop imposing its own system in the country’s largest province.

How much leeway Ottawa is willing to give Ontario – which, with its large manufacturing and metal-processing sectors, accounts more than any other province for Canada’s industrial emissions outside oil and gas extraction – will be telling of how Mr. Trudeau’s government is now approaching its climate agenda.

To approve Ontario’s plan would suggest more desire than previously to demonstrate federal-provincial co-operation in reducing greenhouse gas emissions. But accepting a plan that is less stringent than what the Liberals’ national framework has to this point demanded would also require willingness to ease pressure on industry to prepare for a low-carbon future.

That the Liberals are even considering accepting Ontario’s proposal – which Environment Minister Jonathan Wilkinson’s office confirmed last week, saying a decision would be made in the coming months – is arguably a compromise in itself. (The same goes for considering a similar industrial-pricing proposal from New Brunswick, one of the few other provinces currently without its own industrial pricing system, although its large emitters represent a tiny share of the countrywide total.)

After Mr. Ford took office in 2018, and rolled back the cap-and-trade system introduced by Kathleen Wynne’s Liberals, his Progressive Conservatives did not submit a new plan in time to meet a federal deadline to avoid Ottawa’s industrial-pricing system taking effect in 2019. When the federal Liberals responded by implementing the “backstop” federal system, which sees Ottawa set emissions-intensity limits and collect funds from large emitters that exceed them, the federal government indicated that to provide certainty to industry, it would not revisit the matter until 2022.

But recently, Mr. Trudeau’s government has been aiming to defuse some of the intergovernmental tension that marked their first term. While still at loggerheads with many provinces on the carbon price applied to fuels – the one that directly affects consumers – the Liberals seem to see opportunity to signal common ground on regulating heavy industry.

A precedent was set late in 2019, after Alberta Premier Jason Kenney rolled out an industrial-pricing plan to replace one brought in under his predecessor Rachel Notley. Overlooking aspects less stringent than their own model, the Liberals decided it was close enough to avoid imposing the federal backstop, at least for this year. (It may be revisited before 2021, because Mr. Kenney has not yet committed to annually raising the current $30-a-tonne price on excess industrial emissions as the federal framework requires.)

But what is being proposed by Ontario further tests how flexible the Liberals are willing to be.

To understand why that is, and what is at stake, it helps to drill these complicated models for regulating emissions down to some basics.

“Output-based” carbon pricing in Canada generally involves setting targets for emissions-intensity reductions from heavy industrial emitters, and forcing them to pay for emissions that exceed those targets. The targets are set at different degrees of ambition depending on the sector, with competitive pressures factored in. The penalties usually take the form of buying credits from companies that beat the targets, or paying into government funds that are then redistributed in the province where they were collected.

The differentiation between the federal and provincial models is primarily around how they set the thresholds above which emitters have to pay the current $30-a-tonne price.

Where Alberta mostly relied on federal flexibility was in being allowed to set standards for each large emitter – the level above which it will be taxed – based on that facility’s past emissions rather than a sector average. The criticism of that facility-based approach is that it does not hold to account companies that have been the worst emitters within their sectors.

Where Ontario is trying to push for further flexibility (while also largely joining Alberta in adopting facility-based rather than sector-based targets) is in scaling back the number of emissions priced at all.

Ontario’s model would still provide all emitters with some incentive to reduce their emissions intensity; as in all such systems, those that came in below limits would be able to accrue and sell credits for doing so. But the incentive would be significantly lower than under the federal system.

An additional potential sticking point is around electricity generation. Part of the case for Ottawa approving Alberta’s model is that it’s actually more ambitious than the federal one in pricing emissions from its grid, which is important since that province still uses coal generation. Ontario’s would do less than either the Alberta or federal system to price electricity emissions. That’s not necessarily a big deal since Ontario already has a relatively clean grid. But it could contribute to emissions-intensive forms of generation, notably natural gas, being expanded if demand rises in future.

All that being the case, it might seem an easy decision for the Liberals to take a pass on what Mr. Ford is offering.

It could also signal a looseness that impacts future negotiations with the provinces around compliance with Ottawa’s national climate framework – around how industrial carbon prices are applied, how fuel usage is taxed and other regulatory matters.

And, unlike with Alberta, where every dispute with the provincial government could help foment a national-unity crisis, there would be limited political consequence to federal rejection. It’s not as though Ontarians, most of whom don’t currently consider Mr. Ford their champion, would be up in arms.

But the Liberals may still be drawn to showing that they’re capable of bringing the country along on their climate goals, rather than dividing it.

In theory, it’s better for provinces – closer to the ground when it comes to carbon pricing’s impacts on their economies – to fashion their own systems within a broad framework rather than have Ottawa impose a one-size-fits-all solution.

And there could be upside to letting Mr. Ford claim some leadership on emissions policy. Maybe he would like the reaction, and embrace a more ambitious climate agenda as he tries to improve his image; maybe the Liberals would receive credit for bringing even the most intransigent of premiers into the carbon-pricing fold.

First, Mr. Trudeau and his ministers have to decide whether accepting Ontario’s version of regulating the biggest industrial emitters would be a form of consensus that they – and voters who backed them as they juxtaposed themselves against Mr. Ford – can live with. 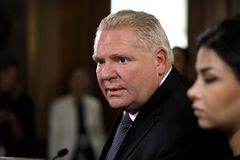 Opinion
If the Doug Ford government wants to be ‘for the people’, it should start with earning the respect of our kids
January 29, 2020