It didn’t come as a big surprise when Boeing jettisoned its CEO last week. It has been an annus horribilis for the U.S. aircraft and defence giant.

Boeing has long been known for big profits, lucrative export sales and iconic planes. But the deadly crash in March of an Ethiopian Airlines Boeing 737 Max – under circumstances eerily similar to those of a Lion Air crash in Indonesia less than five months earlier – exposed something darker.

Ousted chief executive Dennis Muilenburg was the face of a company apparently willing to do just about anything to get its way. He cozied up to U.S. President Donald Trump and key members of Congress, bullied regulators, minimized internal red flags about the safety of the 737 Max and took shortcuts to get the redesigned version of Boeing’s best-selling aircraft to market.

And when the world’s major air safety regulators grounded the plane earlier this year, Boeing kept building more, wrongly assuming that the Trump administration would clear it to fly. Through it all, the company repeatedly assured anxious airlines that certification was imminent.

Hubris is finally catching up to Boeing. The crisis has already cost the company US$8-billion in lost revenue. Production of the 737 Max has been suspended to prevent a further cash drain. It’s still unclear when the plane will fly again.

Boeing’s behaviour – before and after the crash – suggests a company more focused on changing the rules of the game than improving its own game. Its corporate instinct is to throw its weight around instead of simply doing the right thing. Quality control and investment in R&D took a back seat to political donations and lobbying.

As recently as mid-December, Mr. Muilenburg was still putting pressure on U.S. Federal Aviation Administration (FAA) officials to approve deliveries of the grounded 737 Max – even though Boeing has not completed fixes to the model’s flight-control software, The New York Times reported last week.

Boeing’s bad year is a cautionary tale for companies that stake their futures on the vagaries of politics. Excessive dependence on governments – for contracts, financial help or political favours – is a high-stakes game. It causes companies to look for the easy way out rather than fessing up to mistakes and focusing on business fundamentals.

SNC-Lavalin Group – are you listening?

And, for a while, life was good. The Trump tax cuts handed Boeing a US$1.1-billion windfall in 2017. A year later, Congress passed legislation that limited the role of the FAA in approving the design of new airplanes. In 2017 alone, Boeing won more than US$20-billion in U.S. government contracts, including a US$4-billion order for two new Air Force One presidential jets. And Mr. Trump appointed Patrick Shanahan, a long-time Boeing executive, as his deputy defence secretary. For part of this year, Mr. Shanahan was elevated to acting defence secretary, overseeing the massive Pentagon budget.

In 2018, Boeing’s sales broke the US$100-billion mark for the first time, on the strength of record aircraft deliveries.

It was a symbiotic relationship. Mr. Trump repeatedly used Boeing plants as a backdrop to brag about how well his tax and trade policies were working.

“God bless you, may God bless the United States of America, and God bless Boeing,” Mr. Trump said in 2017 at one of the company’s plants near Charleston, S.C.

But the relationship has soured. Boeing's struggles reflect badly on Mr. Trump, who has championed deregulation and trade protections for U.S. manufacturers.

As it bid farewell to Mr. Muilenburg, Boeing pledged to “chart a new direction.” But it offered few specifics.

Like Mr. Trump, the company has repeatedly overpromised and underdelivered. As the 737 Max crisis worsened, Boeing alienated the very people it needed, including politicians, regulators, investors and major customers such as Air Canada and WestJet Airlines.

Most troubling, Boeing has lost the confidence of the travelling public. Company polls show that 40 per cent of frequent fliers around the world say they would not fly on a 737 Max.

Clearly, Boeing still has a lot of work to do if it wants to put 2019 behind it.

Boeing tries to sell the public on the safety of its still-grounded 737 Max
December 24, 2019 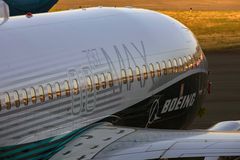 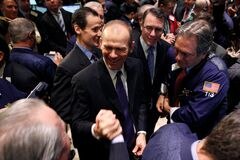 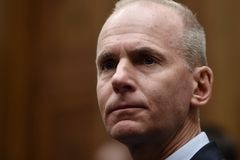