Newton Glassman’s love of litigation has had an unexpected outcome. The co-founder of Catalyst Capital Group Inc. has been quick to launch lawsuits throughout his 17 years at the helm of the $4-billion private equity firm. Multiple court battles have created a legal window into both his corporate and personal life. It’s not pretty. Netflix thrillers have fewer twists and turns than the financier’s court filings.

The latest instalments in Mr. Glassman’s saga are scheduled to play out Thursday. One drama will take place in at a Toronto law firm, where Mr. Glassman will attempt to end a disastrous trip through public markets by Callidus Capital Corp., a lender to troubled companies that has itself become a troubled company. Mr. Glassman was Callidus’s CEO and took the company public in 2014 at $14 a share. He subsequently put Callidus up for sale, claiming the company was worth more than the market would pay and brandishing an investment bank’s valuation of $18 to $22 per share.

Mr. Glassman stepped down at Callidus last year, citing medical issues, while Catalyst continued to control the company. By that point the company’s meltdown was well under way. For all the brave talk, Callidus proved consistently bad at lending, losing a total of $506-million since 2017. On Thursday, Callidus minority shareholders will be asked to approve the sale of the business for just 75 cents a share. The buyer is billionaire Joe Lewis, who owns a resort in the Bahamas called Albany, where Mr. Glassman has a vacation home.

At the same time, another team of Mr. Glassman’s lawyers are busy dealing with proceedings related to the apparent breakdown of his marriage to his wife, Laura MacDonald. The personal matter – and the possibility that it could alter Mr. Glassman’s own financial fortunes in the future – has tongues wagging on Bay Street, and plays into the Street’s obsession with what is going on inside Catalyst.

Like all private equity firms, Catalyst needs to eventually sell the companies it owns to make serious money for their partners. Over the past three years, Mr. Glassman has outlined plans for lucrative exits from businesses such as Gateway Casinos and Entertainment Ltd., Therapure Biopharma Inc. and Advantage Rent A Car, among others. Actual sales, however, have been harder to come by. Gateway, one of the bigger entities in the Catalyst stable, filed paperwork to go public nearly a year ago. There is still no IPO.

Mr. Glassman’s prolific use of lawsuits gives his critics a platform to air their own views of what’s happening. Catalyst went to court two years ago alleging a number of bankers, fund managers and journalists were engaged in a conspiracy against the asset manager. All these players have denied Catalyst’s claim. One alleged conspirator is Nathan Anderson, a New York-based hedge fund researcher.

Mr. Anderson recently asked an Ontario judge to dismiss the lawsuit, arguing he acted in the public interest when he sent Canadian and U.S. market regulators a whistle-blower report after he "formed a view that Catalyst and Callidus were engaging in a scheme to artificially inflate the value of their assets.” In a court filing, Mr. Anderson said his team’s reports on Catalyst for the Ontario Securities Commission and the U.S. Securities and Exchange Commission were driven by a “specific interest, as professional whistleblowers, in bringing to light fraudulent practices by members of the investment industry.”

Past conduct is also playing into Mr. Glassman’s continuing legal fights. Lawyers for the financier’s many opponents can use any judicial appearance as an opportunity to remind the courts of Catalyst’s involvement in a sting operation against a retired Ontario judge conducted by Black Cube, an Israeli spy outfit founded by former Mossad agents. In Mr. Glassman’s legal world, truth can be stranger than fiction.

Not everything in Mr. Glassman’s world is going wrong. By all accounts, he is making a recovery from back problems that led Mr. Glassman to step down as Callidus’s CEO last year. Securities filings signal that Catalyst stands to turn a small profit on its stake in Hudson’s Bay Co., if a buyout offer for the retailer goes forward.

However, the most compelling drama in financial circles comes from reams of documents generated by seemingly endless litigation, showing Mr. Glassman being battered by legal storms that are mostly of his own making. 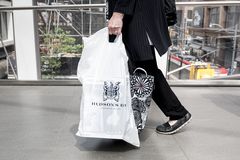