Electric vehicles have become a cause célèbre. Hollywood bigwigs such as George Clooney, Katy Perry and Will Smith have reportedly all gone green. Hoping to cash in on that craze, automakers including General Motors, Audi and Ford drafted LeBron James, Maisie Williams and Idris Elba, respectively, to star in Super Bowl commercials this month to flog their latest plug-in models.

The auto industry seems desperate to convince the masses that electric vehicles are going mainstream this year. That manufactured hype is also evident at the Canadian International Autoshow, which is featuring ecofriendly vehicles including the Toyota RAV4 Prime, Jeep Wrangler EcoDiesel and Hyundai’s 45 concept car. But can ordinary Canadians really afford to go green? And how hard should Ottawa be pushing them to go that way?

With climate change top of mind for Prime Minister Justin Trudeau, there’s speculation the coming federal budget will include an expanded rebate program for consumers who purchase electric vehicles. Canada has set a target to sell 100-per-cent zero-emission vehicles by 2040. That includes sales goals of 10 per cent by 2025 and 30 per cent by 2030. As a point of comparison, zero-emission vehicles, which includes battery-electric vehicles and plug-in hybrid electric vehicles, comprised 2.2 per cent of all new motor vehicles registered in 2018, according to Statistics Canada.

Reducing greenhouse gas emissions is a lofty goal, but governments should be cautious about how they stoke demand for electric vehicles to avoid creating unintended risks for the financial system. Debt-laden Canadians have increasingly opted for longer-term auto loans in recent years to lower their monthly payments. Given the relatively high price of electric vehicles, more government-mandated sales could result in even longer amortizations for auto loans and leave consumers deeper in hock.

“One of the predictions that we’ve made is that once electric becomes mandated and a little more mainstream, that’s when we’ll see the first 108-month financing term in the Canadian marketplace,” J.D. Ney, automotive practice lead for Canada at J.D. Power, told an industry event at The Globe and Mail last week.

Last year, the federal government created a new program to encourage more Canadians to purchase zero-emission vehicles. That federal incentive is worth up to $5,000 for electric battery or hydrogen fuel cell vehicles that have a retail price of $45,000 or less. Separately, Quebec and British Columbia also offer incentives. (Ontario scrapped its electric car rebate program in 2018.)

One estimate suggests that electric vehicles typically cost $10,000 more than comparable gas-powered cars before incentives are thrown in the mix. Therefore, it’s easy to see how a nine-year term could become the new normal for electric cars. It’s not a far leap from what’s already on offer. Take Bank of Nova Scotia’s ecoliving auto loan program, for example. It offers loans from $7,500 to $300,000 and amortization periods of up to eight years for consumers who purchase eligible hybrids, electric and clean diesel vehicles, according to its website.

Even before the recent push for electrical vehicles, consumers were already opting for longer amortizations when financing the purchase of gas-powered cars and trucks. At present, 71 per cent of new cars are financed over terms of 72 months (six years) or longer. That compares with just 14 per cent of auto loans in 2008, Mr. Ney said. Increasing numbers of consumers are also opting for 84- and 96-month financing terms, according to the Financial Consumer Agency of Canada.

“Canadians love us some debt and we like to hold it as long as possible,” Mr. Ney said.

And that’s exactly why governments need to exercise caution when intervening in the auto market. It’s important to remember that before the 2008 financial crisis, it was customary for Canadians to pay off their cars over five years. Back then, consumers who opted for longer amortizations tended to have sketchy credit.

“While consumers are opting for longer loan terms, they are not necessarily waiting longer to break their current loans. Most continue to break their auto loans during the fourth year,” the FCAC said in a 2016 report.

That means more consumers are trading in vehicles with negative equity. At last check, the average amount of negative equity carried by consumers who were underwater was $6,700, the FCAC said.

The dearth of reliable public transit outside of major cities means Canadians will be reliant on cars and trucks for decades to come. That’s why Ottawa should work with the provinces to bolster consumer protection for both gas-powered and electric vehicles. Specifically, dealers should spell out in clearer terms how vehicles depreciate in value over their entire life cycle.

Canadians are already shouldering near-record amounts of household debt. Anything that risks making that worse should be discouraged. Electric vehicle rebates are all well and good, but Ottawa must also make it clear that being in the red is no way for Canadians to go green. 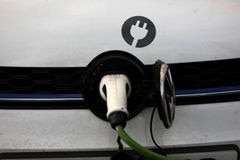 Opinion
Canada can be a leader in the global electric-car battery market
February 3, 2020