On Wednesday, Prime Minister Justin Trudeau was in the House of Commons taking flak from the Conservatives for reckless spending and running up the deficit.

A day later, Mr. Trudeau was in Calgary fending off angry demands from Albertans that Ottawa spend more to save the oil sector from the worst price crash in decades.

It’s Canada’s new economic divide. And Sunday’s Grey Cup showdown – Ottawa vs. Calgary – is shaping up as a metaphor for the duelling economic narratives playing out across the country.

On the one hand, there is Ottawa: flush with tax revenue and in spend mode as the national economy runs near full tilt, corporate profits surge and unemployment hovers at lows not seen since the 1970s. For now, at least, conditions are hot enough for the Bank of Canada to continue hiking interest rates to cool things down.

Then, there’s Alberta: rapidly becoming a have-not province. Energy-dependent Alberta is in full-blows crisis mode as crude prices sink to new lows and inventories swell in the face of pipeline bottlenecks and too much supply. And the province is looking to Ottawa for handouts, most notably to subsidize the purchase of rail tanker cars to haul oil.

It has been a dramatic reversal of fortunes. The Alberta government now faces a devastating loss of up to $4-billion in energy royalties in 2019 because of the record price gap between Western Canadian heavy crude and the main North American benchmark, exacerbating an already worsening fiscal situation, according to an analysis by the Bank of Nova Scotia. That represents a potential loss up to $950 for every Albertan.

Canada’s richest province, which had zero debt as recently as the 2015-16 fiscal year, is on a track to have more debt relative to its size than profligate Ontario by 2042. Alberta, and Manitoba, are now on “dangerous long-term debt trajectories that could significantly compromise their economic growth prospects and place substantial burdens on the backs of future generations,” according to a blog post this week by the Vancouver-based Fraser Institute.

Federal Finance Minister Bill Morneau walked into the economic divide with this week’s Fall Economic Update, a sort of mini-budget. Mr. Morneau acknowledged the “challenges” facing the oil and gas sector in a speech in the Commons. But he offered no special help for the oil patch as he talked up the country’s “strong and growing economy.”

Mr. Morneau pointed out that “because the economy is doing well, we ... have the fiscal room to continue to follow through on the commitments we made to Canadians.”

The federal government is forecasting a declining budget deficit through to 2023-24. But it’s letting those deficits run higher by spending part of the dividend from the strong economy on various measures, including nearly $600-million for the ailing news media and enhanced tax writeoffs on business capital expenditures, such as software and plant machinery. But there was no money for rail cars, prompting howls of protest from the Alberta government. Western Canadian oil producers are struggling to move their oil to refineries in the United States because existing pipelines are full and new projects remain stalled by legal and regulatory delays.

The hundreds of angry protesters who greeted Mr. Trudeau in Calgary, demanding action, suggest that Albertans, at least, do not see an economy that is doing “well.”

“There is no question that folks in Alberta, folks here in Calgary, are living through extremely difficult times ... ,” Mr. Trudeau said. “I hear that very, very clearly.”

To be fair, the federal government is already heavily invested in Canada’s oil sector. Ottawa has committed roughly $12-billion to purchase and expand the Trans Mountain pipeline to get Alberta crude to foreign markets via Burnaby, B.C.

For now, the pain of the oil price squeeze is contained mainly to Alberta. It’s a case of two economic solitudes – one grim, one more hopeful.

But the longer Alberta’s crisis lasts, the greater the risk that these duelling economic storylines will eventually collide, spreading the damage to the rest of the country. The Toronto-Dominion Bank estimates that if crude prices remain stuck at current levels it would knock half a percentage-point a year off economic growth nationally.

The Grey Cup odds, at least, suggest Alberta is poised to inflict pain on the rest of the country. The Calgary Stampeders are four-point favourites over the Ottawa Redblacks in Sunday’s game. 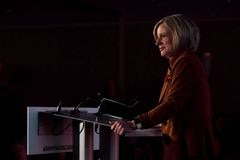 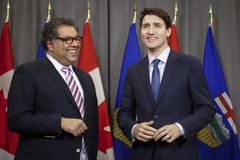