Jim Leech is the retired president and CEO of the Ontario Teachers’ Pension Plan.

The Canada Infrastructure Bank has recently completed its first 12 months of operation. I’ve read various commentaries about the CIB’s effectiveness. As the former head of one of the world’s earliest and largest infrastructure investors, and a midwife in the creation of the CIB – establishing its governance, clarifying its mandate and recruiting a chair, board and chief executive – I can’t help but join the discussion.

While I was at the Ontario Teachers’ Pension Plan, I often expressed frustration that our infrastructure investments, and that of other Canadian pension plans, were outside of Canada at a time when it was clear Canada had an infrastructure deficit that could not responsibly be bridged through continued government borrowing and traditional grants.

Other countries facing the same challenge – Britain, Australia, New Zealand – addressed the issue by selling existing government-owned infrastructure to private investors, such as Canadian pension plans, and redeploying the proceeds into new infrastructure projects. However, this strategy was deemed “politically difficult” for Canada.

In 2017, Canada chose a more innovative solution – the creation of an entity that through relatively small-risk-mitigating investment could stimulate extensive third-party funding for new infrastructure. In that way, Canada would get more infrastructure built, over and above its already significantly increased grant budget, by attracting non-government funding.

To be successful, this ambitious strategy takes: appropriate governance, a high level of talent, and time to work with government sponsors and the private sector to plan and develop new major projects.

Unfortunately, this timing does not conveniently align with any electoral cycle. It took Canada’s pension plans many years to build their investment teams and sizeable portfolios through the purchase of privatized assets – building new projects from scratch will take much longer.

In its first 12 months, the CIB has announced involvement in five new projects – more than $3.25-billion committed – and has announced it has an additional 25 projects currently under consideration. Experience from the private sector would suggest that is pretty good in such a short time. And yet, some critics have expressed disappointment based, in my view, on several misconceptions.

The CIB’s investment pace is slow

It took Teachers’ more than three years to invest the amount CIB has already committed – and that was by purchasing complete projects, not building from scratch. Startup projects take considerably more due diligence and analysis. Putting money out the door is never a challenge – investing wisely for the betterment of Canadians takes time and talent.

The CIB has an expensive structure

Stimulating and investing in new infrastructure requires an experienced team. These professionals are in high demand around the world. And of course, at the start of any portfolio, the cost per asset under administration will be disproportionately high.

The question should not be “cost” – the question should be: “What is the net benefit realized?” In the early days at Teachers’, some eyebrows were raised around compensation. But experience proved that by bringing talent inside the organization, as opposed to paying outside experts, there was a net cost saving as well as greater value added to the investment returns. As the CIB matures, the same net benefit should be realized.

Privatizations were specifically excluded from the CIB’s mandate. Rather, it is to work with government sponsors to generate more infrastructure for Canadians. The CIB is not a threat to jobs – in all likelihood, through its participation, more jobs in both the private and public sector should be created.

The CIB could crowd out other investors

The objective is the exact opposite – to crowd in other investors. None of the projects announced to date would have gone forward if it were not for the CIB’s investment. There is no one else in the investing universe who will provide the type of stimulus funding.

The CIB subsidizes the private sector

The CIB does not make grants to projects – that is the role of Infrastructure Canada. The CIB provides investment capital that alters the risk-reward balance so that the third-party investment risk is mitigated in exchange for a share of the potential reward. This is not a subsidy – it is stimulus to get a project built that otherwise would not. In the case of the Montreal REM or rapid transit system project, for example, the CIB’s entire investment will be repaid with interest in 10-15 years when the project is sustainable.

The CIB is a just one tool in the tool kit for creating a better way of life for Canadians. It is innovative – nowhere in the world has this idea been tried. We should not be afraid of being leading edge; but just like Canada’s world leading pension plans, it will take time to realize its benefits – 12 months does not do it justice. 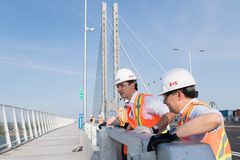