With interest rates on the rise and the Canadian banks moving up lending rates, the higher cost and reduced availability of credit will affect all Canadian businesses, like a rising tide lifting all boats. Inevitably some boats will be swamped and sink, particularly if they are smaller and more vulnerable.

One set of borrowers at greater risk are Canada’s 1.14 million small businesses, defined as companies that employ up to 99 workers. Statistics Canada reports that small businesses represented 98 per cent of all businesses, employed 70 per cent of workers, and generated 30 per cent of each province’s GDP on average. This category includes startups and high-growth firms, which represent Canada’s best hope for job creation and economic growth.

As credit becomes less available, small businesses face a difficult choice of cutting back on investment or turning to more expensive borrowing, such as credit cards or payday loans. Either option is bad.

Fortunately, small businesses now have an alternative source for loans called peer-to-peer (P2P) lending. These online platforms match borrowers and investors directly and can provide loans cheaper and faster than traditional sources. How can that be? The answer is technology.

Taking a step back, small businesses are financed differently than big ones. Most Canadian startups have neither the credit history nor the collateral to secure a bank loan. Statscan reports that more than 80 per cent of startups rely on alternative funding sources such as the entrepreneurs’ savings and personal loans taken out by owners. Only 45 per cent can access credit from financial institutions and 19 per cent receive trade credit from suppliers.

Technology is disrupting this paradigm. P2P lending platforms allow businesses (and individuals) to take out a loan online with the funds crowdsourced by investors who pool their savings to fund loans. Traditionally only financial institutions were set up to screen borrowers and allocate credit. But technologies such as the internet, cloud computing, data analytics and artificial intelligence have opened this asset class to new lenders such as your neighbour or a fellow business owner.

Canada’s first P2P platform, Lending Loop, was launched in late 2015 – a decade after this model was pioneered in Britain by Zopa. Last month, Lending Loop passed $20-million in loans funded on its platform by more than 20,000 Canadian investors. While $20-million is impressive, it is still only a sliver of the $95-billion of credit outstanding to Canadian small businesses as reported by Statscan.

The average small business borrower on Lending Loop’s platform is borrowing $75,000 to $100,000 for three to five years. While interest rates vary substantially, P2P loans typically start at around 6 per cent with an average interest rate of 12 per cent, significantly lower than a credit card. These loans are used to finance inventory and equipment, or to hire new employees.

The Canadian P2P lending market got a boost this month when the Ontario government announced it would contribute $3-million over the next two years to loans funded on Lending Loop’s platform. The Ontario government will fund up to 10 per cent of small business loans, supporting funding of $30-million.

Besides the obvious benefit to small businesses, Ontario’s announcement was important for two reasons. First, Ontario has drawn attention to P2P lending as an alternative funding source and raised awareness among businesses to accelerate adoption. And second, by partnering with a fintech startup, Ontario is leading by example and giving a boost to entrepreneurs working to democratize finance.

First, Canada should follow Britain and adopt new P2P lending regulations, as opposed to shoehorning this sector under existing equity regulations. New regulations should ensure the cost of due diligence borne by lenders is proportionate to the investment risk.

Second, retail investor caps for P2P lending should be raised over time if this asset class is proven to be low risk, increasing the pool of funds available to meet the needs of small businesses.

Third, the federal government should partner with industry to provide more education for investors and small businesses. This effort should include data collection and benchmarking to allow researchers to establish what is working and what is not.

Fourth, Canada should adopt Britain’s mandatory referral program. Banks that reject a small-business loan must refer unsuccessful applicants to a government portal that connects them with alternative lenders who may be able to assist them.

Our hope is that Canadian politicians recognize that promoting innovation means more than cutting ribbons and offering tax credits. It is about plugging holes in a leaky financial system and adding wind to the sails of small businesses to move them forward.

Craig Asano is the founder and chief executive of the National Crowdfunding and Fintech Association of Canada. Michael King is an Associate Finance Professor at Ivey Business School. 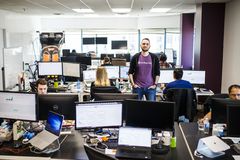