The battle for Cirque du Soleil may ultimately come down to a duel between Quebecor chief Pierre Karl Péladeau and Cirque chairman Mitch Garber.

As the Cirque’s lenders prepare to table their own offer to take control of the company, which filed for court protection from its creditors on June 29, sources close to the proceedings confirmed that Quebecor still has its sights set on the Montreal-based entertainment colossus. Potential bidders have until mid-August to present competing offers, and Quebecor appears to be assembling its own bid, one that would include ousting Mr. Garber as Cirque chairman.

Quebecor has sided with creditors in accusing Mr. Garber and Cirque chief executive officer Daniel Lamarre of favouring existing shareholders, led by Texas-based TPG Capital, throughout the restructuring process that began in April as the Cirque began a desperate search for capital. Quebecor said an offer to provide US$80-million in interim financing in April was ignored by Cirque management, which subsequently announced a restructuring deal with TPG.

In documents filed last week in Quebec Superior Court, Quebecor pointed to the close links between Mr. Garber and TPG founding partner David Bonderman, whom Mr. Garber joined in a bid to bring a National Hockey League franchise to Seattle and who Mr. Garber last year referred to as a “great friend and a great mentor” in an interview with The Seattle Times.

Quebecor has been unsuccessfully seeking an NHL franchise in Quebec City, intensifying the longstanding rivalry between Mr. Péladeau and Mr. Garber. The two men began taking swipes at each other on Twitter as the battle for the Cirque heated up, after an initial bid that would have seen its existing shareholders – TPG Capital, China-based Fosun Capital and Caisse de dépôt et placement du Québec – maintain majority control of the company.

After a filing by court-appointed monitor Ernst & Young that showed the Cirque had racked up red ink of more than US$160-million in three years to Dec. 31, 2019, Mr. Péladeau tweeted on July 2 that the losses “demonstrate beyond any doubt that the management of Daniel Lamarre and .@mitchgarber has been more than deficient. Despite the sales pitch from management, we must save the Cirque and its talents.”

Mr. Garber immediately shot back with his own tweet, attacking the Quebecor heir’s business acumen: “My life would have been so much easier with a lot less risk if my daddy gave me my company and a few billion$. Unfortunately, I had to build and learn starting from nothing. You will always be the guy born on 3rd base but convinced he hit a triple.”

The TPG-led bid, which would have been financed in part with a $200-million loan from the Quebec government, was soundly rejected by the Cirque’s largest creditors, led by Toronto-based Catalyst Capital, Los Angeles-based CBAM Partners and New York-based Sound Point Capital Management. On Tuesday, the creditors were putting the finishing touches on their own bid for the Cirque, which is expected to be formally presented in court on Friday.

The creditors’ offer, which includes no government money, would be designated by the court as a stalking horse bid against which any subsequent bids are evaluated. An original August 14 deadline for rival bids will likely be extended by several days, giving Quebecor time to table its own offer or join the creditors in an amended bid for the Cirque. Neither side appears to have ruled out that latter possibility.

Sources involved in the proceedings said the creditors are willing to bring on additional Quebec or Canadian partners as part of their commitment to maintaining the Cirque’s headquarters in Montreal. They are interested in restoring the Cirque to the heights it reached under co-founder Guy Laliberté, who sold all but 10 per cent of the company to TPG, Fosun and the Caisse for a reported US$1.5-billion in 2015. The Caisse purchased Mr. Laliberté‘s remaining stake earlier this year, just before the coronavirus pandemic struck.

“This is not just a bunch of vulture creditors seeking to squeeze what they can out the company in order to do a quick flip,” a source close to the proceedings said, adding the creditor group is committed to ensuring the Cirque’s long-term viability.

Forced to close all of its permanent and touring shows in March owing to pandemic shutdowns, the Cirque hired National Bank Financial to seek out potential new investors in the company and began parallel negotiations for financial aid from the Quebec and federal governments. An initial round of bidding in May was inconclusive, leading the Cirque to file for court protection under the Companies’ Creditors Arrangement Act in Canada.

Mr. Péladeau, a staunch Quebec nationalist, would dearly love to add the Cirque to Quebecor’s stable of media and entertainment assets. Along with Céline Dion, the Cirque is considered to be Quebec’s signature entertainment brand and a symbol of the province’s creative flair. However, the Cirque seemed to lose its mojo after Mr. Laliberté‘s departure and subsequent heavy borrowing under the TPG-led ownership group. Its most recent Las Vegas show, R.U.N., was a colossal flop that closed after only a few months, even before the pandemic struck.

Mr. Péladeau’s rivalry with Mr. Garber has only upped the stakes for the Quebecor chief.

Winners and losers: How every stock in the TSX Composite performed over the first half of 2020
Subscriber content
July 2, 2020 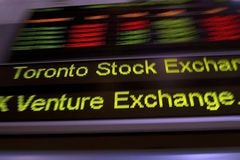