When Verizon Communications Inc. was considering entering Canada’s wireless market in 2013, a rift emerged within the federal Conservative Party.

Anthony Fell, a director of BCE Inc. at the time, wrote a caustic letter to then-prime minister Stephen Harper criticizing the “arrogance” of the Conservative government’s telecom policy and accusing Mr. Harper of enticing a rival U.S. company with unfair advantages.

“I am writing this letter as a Canadian citizen and a long-standing member of the Conservative Party of Canada and a strong past and present supporter of you and your government,” read Mr. Fell’s letter, which was reproduced by a national newspaper.

Given his stature on Bay Street – Mr. Fell is also a former chief executive of RBC Dominion Securities Ltd., a previous governor of the Toronto Stock Exchange and a past chairman of the Investment Dealers Association – his rebuke of his Conservative brethren quickly circulated in Corporate Canada.

When the Harper government retaliated with a $9-million ad campaign attacking the wireless industry, which consumers felt was gouging them, many on Bay Street privately vowed to vote against the Tories in the 2015 general election. With a Bank Act review on the horizon and the Conservatives making noises about financial consumer protection, those in the banking industry were especially worried about the party’s increasing populist bent.

Although it’s been more than four years since Mr. Harper was tossed from power, the Conservative Party never mended its fissure with Bay Street. Conservative Party Leader Andrew Scheer, who announced his resignation Thursday after 2½ years at the helm, squandered an opportunity to fill the industrial policy vacuum created by Liberal Prime Minister Justin Trudeau.

Dubbed “Harper lite,” Mr. Scheer failed to inspire the business community or anyone else for that matter. Instead of courting progressive voters, he continued to pit Bay Street Conservatives against the ideologues the party drafted from the dregs of the old Canadian Reform Conservative Alliance. As a result, business people no longer have a natural political party in this country – a problem the next Conservative leader would be wise to solve.

To win back the business and entrepreneurial class, the Conservative Party needs a charismatic and cosmopolitan leader who is squarely focused on economic and fiscal issues – and who has the gravitas to restore Canada’s reputation as a good place to invest.

Prime Minister Trudeau has proven inept at handling business issues. His flip-flops on key energy, pipeline and environment files have made Canada look like a basket case to foreign investors. When projects of national interest, such as the Trans Mountain pipeline expansion, are subject to excessive delays or an onerous approval process, it creates regulatory uncertainty – and makes Canada a less-attractive place to do business.

Under Mr. Trudeau’s watch, there have also been allegations of political interference in the criminal case involving Montreal-based engineering company SNC-Lavalin, and a wave of consolidation in the airline industry that is likely to drive up ticket prices. The Liberals should have allowed 100-per-cent foreign ownership of carriers that fly domestic-only routes (as they do in Australia), and also cut the taxes and fees driving up ticket prices for consumers.

High-profile trade spats with the United States and China, meanwhile, underscore Canada’s need to diversify its trading partners. That means the Tories must resist the temptation to solely focus on domestic issues in this minority Parliament.

The last thing the Conservative Party needs is another leader who suffers from myopia. Mr. Scheer’s views on same-sex marriage and abortion alienated progressive voters, especially in the Toronto region.

Conservatives need to stop thumbing their noses at urbanites and start challenging their assumptions about so-called “ethnic” voters who comprise a growing proportion of business professionals. Turns out, people of colour don’t enjoy being treated as cultural curiosities.

Mr. Scheer knows all about the perils of ethnic pandering. In October, he embarrassed himself and the party when he offered wishes for Bandi Chhor Divas, a Sikh celebration, by posting an unrelated image of a south Indian ritual on Facebook and Twitter.

Unfortunately, the informal roster of potential leadership candidates to replace Mr. Scheer leaves much to be desired. Former cabinet minister Peter MacKay, for instance, reminded voters in recent months that he is capricious and proof of the noxious nature of political dynasties. Other possible contenders such as Rona Ambrose and James Moore are also among the Harper-era Conservatives who antagonized the business community in the first place.

Perhaps now is the time for the Conservative Party to seek out new blood. It couldn’t hurt to circle back to disaffected Tories for some leadership advice.

Don’t get me wrong: Mr. Fell’s letter to Mr. Harper in 2013 was entirely self-serving. But many voters can relate to his nostalgia for a party that prioritizes policies over populism, and statesmen over ideologues.

“When you look back over the decades, it’s apparent in every jurisdiction that good politics usually trumps good public policy every time,” Mr. Fell wrote. “There are, however, notable exceptions such as when Brian Mulroney and Michael Wilson put through the GST and the NAFTA against overwhelming odds. … Let’s have good public policy trump what, at least appears to be on the surface, good politics.” 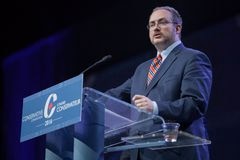