Like a backwater version of Donald Trump, Doug Ford prefers destruction to building or repairing. His first act as Ontario’s premier was to rip up the province’s cap-and-trade carbon program. There was no orderly wind-down; it just vanished into thin air like a plume of diesel smoke.

Mr. Ford gave no hint that he knew exactly what he was killing, or the consequences of the summary execution. In his June 15 statement, when he was still premier-designate, he vowed to “end Ontario’s cap-and-trade carbon tax.” Never mind that the program is not a carbon tax. It’s a market, like those in California and Quebec, that trades carbon allowances.

Polluters such as fuel suppliers and natural gas distributors who exceed their emissions caps buy allowances; those that come below their caps sell them. Since the first joint auction of credits early this year, Ontario has raised $2.4-billion from the program, and the money, by legislation, is to be reinvested in projects that reduce greenhouse gas emissions (GHGs).

Make that was to be.

There is so much wrong with Mr. Ford’s decision that it’s hard to know where to start. When Ontario taxpayers figure out the potential financial costs of ending cap-and-trade, Mr. Ford himself might look like an incompetent reactionary. What is entirely certain is that there will be costs.

Lawsuits are probably being prepared, potentially billions of dollars worth of them, and Ontario’s pullout could severely damage the national climate plan, known as the Pan-Canadian Framework on Clean Growth and Climate Change. When Mr. Trump yanked the United States, the world’s second biggest emitter of GHGs, out of the 2015 Paris climate change agreement, the agreement lost all credibility. Who knows whether the same fate awaits the federal plan now that Ontario, Canada’s second biggest emitter of GHGs, has killed off its own carbon-reduction effort.

Why did Mr. Ford end cap-and-trade? There is no logical explanation other than cynical politics. In a Trumpian tweet in March, he said that “the carbon tax is a terrible tax, it’s a job killer,“ suggesting that the cap-and-trade program was lifting fuel prices. It has, but only by a relatively tiny 3 per cent, according to some estimates.

He vowed to kill Ontario’s carbon program and made good on that promise, as Mr. Trump is doing with his campaign promises, one by one. About the only good aspect of the death of the program is the related death of the lavish subsidies for electric vehicles sold in Ontario. Those subsidies were financed by the program, which no longer exists. Since electric cars are expensive, the subsidies were effectively freebies for the rich.

Mr. Ford’s decision has created a smorgasbord for lawyers. The companies that bought roughly $3.4-billion of Ontario carbon credits at various auctions are holding worthless paper. Imagine owning the shares of a healthy company that, mysteriously and suddenly, goes out of business overnight. There is a good chance they will sue the Ontario government for reimbursement, since those credits were bought in good faith. If the lawsuits are successful – everyone is busy reading the fine print of the cap-and-trade legal documents – Mr. Ford might have to soak his own taxpayers to buy back the credits and maybe pay damages on top.

Ontario might be able to avoid lawsuits if it compensates the carbon-credit owners, but who knows what price the government might offer, and when. “We’ll be dealing with a number of issues, including, obviously, compensation,” Ontario Environment Minister Rod Phillips told QP Briefing last week.

Compensating the carbon-credit owners is just one potential cost. Some of the revenues from the carbon-credit purchases were funnelled into the Green Ontario fund, which was financing, or was about to finance, about 40 climate projects, with many more to come. They ranged from a GHG-reduction scheme at a Lafarge Canada cement plant to electric-vehicle fast-charging stations at University of Toronto. You can assume those projects are either dead or dying, and that the project sponsors will seek compensation.

We’re just getting started here. Ontario will also lose billions in future revenues earned from the cap-and-trade auctions and, by pulling out of the federal climate plan, will lose $420-million from the feds’ Low Carbon Economy Leadership Fund. Add it all up and Ontario faces losses of about $5-billion, according to a document produced by the International Emissions Trading Association.

The feds, of course, will try not to let Ontario ruin Canada’s climate show. Provinces that lack credible climate plans will have one imposed on them from above. This would see Ontario’s 4.3-cent-a-litre gasoline levy replaced with a federal levy of 11 cents. It would also charge polluters $20 for every tonne of GHGs they emit, starting in 2019 and rising to $50 a tonne in 2022. Presumably, those costs will be passed on to consumers. “If provinces do not wish to be part of the national plan, the federal government will move forward on bringing in a carbon-price backstop,” said Prime Minister Justin Trudeau in early July. “The clear mandate that I got elected on is to bring in a national plan to fight climate change.”

Mr. Ford might launch a legal challenge to the federal plan, though Ontario’s jurisdictional arguments are unlikely to win in court. He will blame the Liberals for raising fuel prices when their backstop hits Ontario in January. A federal election is due next year and Mr. Ford will do his best to turn Ontario voters against the Liberals unless they make some sort of deal to prevent fill-up prices from soaring.

But the blame game is a big gamble on Mr. Ford’s part. Killing Ontario’s cap-and-trade market creates far more losers than winners, and the former camp will include Ontario taxpayers if the province is forced to dole out billions to the owners of the worthless carbon credits. The other loser, of course, is the environment, but Mr. Ford evidently doesn’t care about that either. 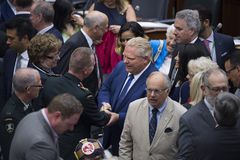 Opinion
Why nothing important will come from premiers’ confab
July 12, 2018 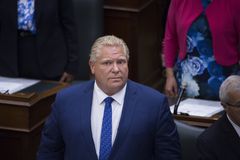 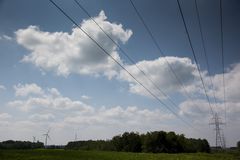