Mostafa Askari is the chief economist, Sahir Khan is the executive vice-president, and Kevin Page is the president and CEO of the Institute of Fiscal Studies and Democracy at the University of Ottawa.

The time has come to start the debate on appropriate budgetary constraints for the federal government in a post-COVID-19 economy. This debate should involve all political parties, experts and non-experts in public finance, young and old. At the core of the debate is the role we want the federal government to play in supporting the recovery and facilitating structural changes for a more inclusive, resilient and sustainable economy.

The Prime Minister has said that now is not the time to set a fiscal anchor – a prudent level of debt relative to income. We are in the midst of an historic pandemic. Fiscal supports are essential to support households and businesses while infection rates remain high. Interest rates are at record lows, so we need not worry too much about increasing borrowing charges. There is enormous global uncertainty, which limits the vision of policy makers.

In this regard, we should not expect to see how the government will constrain itself in the coming fiscal update. The clock is ticking.

Many Canadians were shocked to see the enormous increase in the federal deficit in the government’s Economic and Fiscal Snapshot 2020, published in August. Papers released by global institutions such as the International Monetary Fund suggest that Canada will likely experience the largest increase in budgetary deficit among advanced countries. This fall’s Speech from the Throne indicates the government plans higher spending in the years ahead for early childhood development and care, training and infrastructure.

All governments need constraints. Politicians do not like to raise taxes. There is a bias toward deficits. Higher debt can create the risk of future economic instability. It can reduce fiscal room to address the next economic downturn. Constraints also signal future policy intentions of governments and are essential to promote accountability.

If the Prime Minister does not want to set a medium-term fiscal anchor in the current environment, why not at least open the debate.

In a short paper published by Finances of the Nation, we lay out multiple possible economic and policy scenarios over a 10-year period – changes to interest rates, policy changes to spending and revenues (austerity to stimulus) – to illustrate potential effects on budgetary balances (size of deficit) and debt.

The scenarios highlight both the uncertainty of the times and the range of potential policy responses from different political parties (all parties should participate in this discussion). The policy framework to think about budgetary constraints comes from the work at the IMF and the Organization for Economic Co-operation and Development on best practices drawn from experience.

From the IMF, we learn it is best to keep constraints simple, flexible and enforceable.

From the OECD, we learn that best practices have key components: a fiscal anchor (a prudent debt anchor); a fiscal (operational) rule to help ensure we hit our debt target (e.g., a discretionary spending growth target); escape clauses when bad things happen (i.e., fiscal policy must be reset if Canada gets hit by another adverse shock); and improved enforceability. Canada, like the European Union, should make use of independent fiscal institutions such as the Parliamentary Budget Officer to increase productive engagement by Parliament on macro-fiscal management issues such as debt management.

In this forward-looking context, public finance analysts can provide examples of what an improved debt-management strategy could look like – for example, including the numerical values of a debt-to-GDP fiscal anchor, as well as spending growth targets.

Prior to the pandemic, the government had a simple fiscal rule of a declining debt-to-GDP ratio. We do not think this is sufficient in a postpandemic environment, when our debt-to-GDP ratio is set to climb more than 60 per cent to address the crisis. Bond-rating agencies will be looking for enhanced fiscal-management commitments. Canadians are also right to have concerns about how much fiscal space we will have to address the next adverse shock and its impact on the next generation’s ability to address big policy issues such as climate change and income inequality. 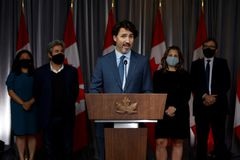