Emran Qureshi
Contributed to The Globe and Mail
Published May 24, 2021 Updated May 24, 2021
Comments
Text Size
Please log in to listen to this story. Also available in French and Mandarin. Log In Create Free Account

William McNeill, the eminent University of Chicago historian, declared that plagues alter the direction of human history with political, economic and demographic effects on humanity. He wrote, “Infectious diseases which antedated the emergence of humankind will last as long as humanity itself, and will surely remain, as it has been hitherto, one of the fundamental parameters and determinants of human history.”

His prophetic words ring true. This is a transformative moment that will alter the direction of nations, businesses and peoples. We will not be returning to the world that existed prior to the emergence of the SARS-CoV-2 virus.

Globalization has been disrupted, perhaps irreversibly. Western nation-states will never again allow crucial medical supply chains to be sourced from China. More recently, the European Union threatened to restrict the export of COVID-19 vaccines, potentially disrupting the global vaccine supply chain. It was aptly described as “vaccine nationalism.” Nation-states that did not have the capability to produce vaccines were left in a perilous predicament. Global politics has also been reshaped. China believes itself to be the ascendant superpower, having vanquished the United States.

There is one bright flicker of hope: biotech. The spread of the pandemic is being slowed by the emergence of effective vaccines that were developed and deployed in fewer than 11 months. This is an extraordinary advance from past vaccine development, which ranged from five to 10 years. Two of the first vaccines that were out of the starting gate and jabbed into arms were from Pfizer-BioNTech and Moderna , which both used new mRNA vaccine technology.

“We’re a technology company that happens to do biology,” Moderna chief executive officer Stéphane Bancel says in a case study that was presented to the Harvard Business School in February. The Cambridge-based platform startup heavily invested in digital biotechnology, developing a digital drug design studio where drugs are designed online rather than in a lab setting and fully connected to digital manufacturing facilities.

Two days after the novel coronavirus was sequenced by Chinese scientists and posted online, Moderna scientists finalized a design for a vaccine candidate working closely with a team of researchers at the Vaccine Research Center of the U.S. National Institute of Allergy and Infectious Diseases.

The vaccines that the U.S. government scientists developed and patented have been used by Moderna and BioNTech. As Scientific American noted, “for billion-dollar COVID vaccines, basic government-funded science laid the groundwork.”

In Mainz, Germany, BioNTech CEO Ugur Sahin read an article in The Lancet medical journal on a Friday in late January, 2020. He told Ozlem Tureci, his wife and BioNTech co-founder, that the Wuhan, China, outbreak would lead to a global pandemic and the following Monday told staff that they needed to act and develop a vaccine using their expertise in mRNA technology. The project was called Operation Lightspeed. Dr. Sahin realized his small company could not do it alone and partnered with Pfizer , which possessed a global manufacturing and distribution capability.

Organizational adaptation, collaboration and agility are now essential for survival in this new pandemic environment, which the successful vaccine manufacturers demonstrated in abundance.

Pfizer CEO Albert Bourla has noted with pride that his 171-year-old company was able to move faster than competing startups. Pfizer needed to move with urgency and demonstrate that it had developed a safe and effective vaccine. It took bold risks that have transformed his company, leaving Big Pharma competitors behind.

Pfizer gambled US$2-billion of its own money with no guarantee of success at the onset. It spent US$500-million on developing a manufacturing capability for new mRNA biotechnology while the clinical trials were in progress. On Dec. 9, 2020, Pfizer and BioNTech received Health Canada authorization for their COVID-19 vaccine, followed by Moderna on Dec. 23.

Innovation does not occur in a vacuum. It is supported and nurtured by research universities, venture capitalists and governments.

Where does Canada rank in global innovation rankings? The recent Bloomberg 2021 Innovation Index ranked Canada No. 20, behind Italy and ahead of Slovenia. It’s an uninspiring middle-of-the-pack ranking that puts the spotlight on a flaccid performance, particularly in value-added manufacturing and high-tech density.

Joel Blit, an economist at the University of Waterloo in Waterloo, Ont., who studies innovation, has observed that over the past 20 years, every Group of Seven country has increased its investments in research and development (as a percentage of GDP) except Canada. He worries that we are on a downward trend and will soon occupy the bottom rung currently occupied by Italy.

Prof. Blit notes that Canadian businesses were far slower to adopt technologies in comparison to their U.S. counterparts during the Great Recession of 2008 and he fears the same could be happening again during the present crisis.

Moderna co-founder and serial entrepreneur Derrick Rossi spoke at his alma mater, the University of Toronto, in March and shared his thoughts on Canadian innovation and industrial policy with several thousand young Canadian entrepreneurs online. The former Harvard professor said the challenges facing humanity in the context of COVID-19 are massive. Canada should start with funding virologists and basic science. He noted there needs to be an investment in manufacturing because that is where Canada is lagging and public-private partnerships are the best way to achieve this result.

Dr. Rossi suggested another benefit of developing a Canadian vaccine manufacturing capability was providing vaccines to the global south in concert with a distributed worldwide manufacturing network. This would allow Canada to punch above its weight and contribute to the global common good and maintain essential capacity at home.

In 2021, Moderna expects to make US$19.2-billion and BioNTech expects to reap US$15.1-billion. Not bad for two startups that had never released a product prior to the pandemic. BioNTech and Moderna plan on developing COVID-19 boosters. Both companies plan to massively invest in R&D. Moderna has at least a dozen drugs in development. BioNTech is returning to its original mission, which was to develop precision cancer therapeutics, with trials planned in 2022.

What did William McNeill say of the future? He had an ominous warning: “Ingenuity, knowledge and organization alter but cannot cancel humanity’s vulnerability to invasion by parasitic forms of life.” 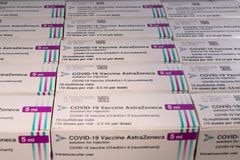