After an acrimonious four-day summit that almost collapsed, European Union leaders signed off on an unprecedented stimulus package early Tuesday that will see the bloc issue €750-billion in joint debt to help member countries repair their pandemic-battered economies.

Before the pandemic, the idea of joint debt, floated as far back as the financial crisis, would have been unimaginable. The wealthy northern EU countries, led by Germany and the Netherlands – the latter perennially playing the role of German Chancellor Angela Merkel’s attack dog – simply wouldn’t countenance such a proposal.

They considered “federalizing” the debt a gateway to moral and fiscal rot, in effect paying for the sins of the feckless Mediterranean countries – Italy, Spain and Greece – which ran uncompetitive, reform-allergic economies. Why reward them with ultracheap common debt backed by the impeccable credit ratings of the fiscally prudent northern countries?

Then came the pandemic, which thrust the 27 EU countries into deep recession through no fault of their own. The virus was not homegrown; it came from afar and spared none of them. The European Commission, the EU’s executive arm, this month forecast that GDP in the EU will sink 8.3 per cent this year. As usual, Italy, the EU’s third-biggest economy, posed the biggest risk to the bloc’s well-being. Its economy is expected to contract by 11.2 per cent. Were Italy to sink beneath the waves, it would pull the EU and the euro down with it.

So the naysaying EU leaders, the pandemic gun to their heads, had a good rethink about joint debt in particular and stimulus packages in general, and what they produced was unprecedented. The agreement did not come easily. The cheesy grins were a front. The animosity among them during the summit – the second-longest on record – was widely reported and could resurface at any time.

The agreement came at 5:30 a.m. Tuesday in Brussels and was declared a landmark moment of unity by EU leaders and economists, who feared that failure to deliver the package would send the markets tumbling and delay the recovery of EU economies. Italian Prime Minister Giuseppe Conte called it a “historic moment for Europe.”

The recovery package came alongside the approval of a €1.1-trillion EU budget that will cover the bloc between 2021 and 2027. “We are 27 around the table and we managed to produce a budget,” French President Emmanuel Macron told reporters. “In which other political sphere in the world is that possible – is that done? None.”

The recovery fund is composed of two elements: €390-billion in grants and €360-billion in low-interest loans. The EU will borrow the funds in the capital markets through 2026, and 70 per cent of the grants will go out the door in 2021 and 2022. But the first payments to EU states will probably not be delivered until mid-2021, which means the hardest-hit countries – notably Italy, Spain and France – will have to find their own fiscal measures for another year to prevent their economies from deteriorating further.

In a note, the European economists at ING said: “In terms of size, the fund is still relatively small given the severity of the economic crisis. … Still, given that more than a year ago a meagre eurozone budget was almost impossible, and given how far apart member states had been at the start of the discussion, this morning’s outcome is still remarkable.”

The package of grants and loans was originally proposed by Mr. Macron and Ms. Merkel in May, when it became apparent that the pandemic would not politely disappear in time for the summer holidays. Its success was far from assured because of resistance from the leaders of the “Frugal Four” – Austria, Denmark, the Netherlands and Sweden – who opposed the idea of doling out grants to member countries with few conditions attached. They were less opposed to the idea of loans, which they argued would instill some economic discipline.

In the end, the Frugal Four managed to whittle down the grant component from €500-billion to €390-billion. As a sweetener to break the deadlock, they were given hefty rebates on their annual EU budget contributions. Still, the package exposed the north-south fault line, which took the shine off the apparent sense of unity among the EU leaders. In short, the northern countries do not trust the southern countries to spend their free loot – or even the cheap loans – wisely.

Dutch Prime Minister Mark Rutte managed to secure an “emergency brake” that would temporarily halt transfers to a member country if it did not honour its commitment to reform its economy. Hungarian Prime Minister Viktor Orban threatened to kill the entire package, whose approval required unanimity, if it came with rule-of-law conditions such as guarantees for judicial independence. A compromise was worked out that will allow only a weighted majority of governments to block payments over rule-of-law violations.

Almost a third of the stimulus package is to be devoted to fighting climate change, though details were scant. The EU agreed that all spending must be consistent with the carbon-reduction goals of the 2015 Paris Agreement. But will it? The desire to siphon off “green” money for other purposes may be irresistible for any leader seeking re-election. A solar farm? How about a tax cut or a nice new road instead, dear voters?

Still, you have to hand it to the EU for coming together as the worst crisis in its history – an existential crisis if it deepens with the arrival of a second COVID-19 wave – continues to bludgeon the bloc. The unity may not last if reckless spending starts, but at least it shows that the EU is largely intact and capable of decisive action for the benefit of all when it is cornered by the enemy – an invisible virus in this case. 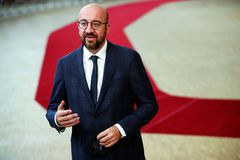 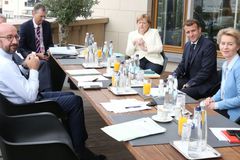