Just days before a tentative deal was reached to overhaul NAFTA, the U.S. government quietly renewed its long-standing curbs on sugar imports.

Special quotas allow small quantities of foreign sugar to be sold in the U.S. duty free before steep tariffs kick in.

Canada, for example, will get to export 10,300 metric tonnes of refined sugar to the U.S. over the next 12 months, according to a Federal Register notice posted by U.S. Trade Representative Robert Lighthizer – the same Mr. Lighthizer who led the U.S. team in renegotiating the North American free-trade agreement. That quota represents a tiny one-tenth of one per cent of the massive U.S. sugar market. And the cap has been fixed at the same level since 1994, when NAFTA was signed. Any exports above that level face a 95 per cent tariff. Tariffs up to 150 per cent apply to products that contain at least 10 per cent sugar, such as certain chocolate ingredients, tea and coffee mixes, cakes or cookie dough.

These are the tariffs the Americans don’t like to talk about – least of all U.S. President Donald Trump, who has ranted for months about the unfairness of Canada’s tariffs on dairy and poultry products, which range from 150 per cent to 298 per cent.

In the world of trade, the difference between a 95 per cent tariff and a 298 per cent one is meaningless. Both are effectively prohibitive. It’s hard to find a buyer when you’re selling at two or three times the going price.

The tentative United States-Mexico-Canada Agreement, reached last week, is a reminder of what trade deals with the U.S. have become in the Trump era. Unlike virtually every trade deal Canada has ever signed, this one is not about freer markets, reciprocity or even fairness, as Mr. Lighthizer insisted at a White House ceremony.

For Canada, it is about fighting to slow the steady erosion of access to the massive U.S. market.

While Ottawa bowed to a number of U.S. demands in the deal announced late Sunday, the U.S. budged very little. There is no relief on any major Canadian demands, such as relief from softwood lumber duties, recently imposed steel and aluminum tariffs or strict Buy American rules on U.S. government purchases.

And the prohibitive tariff wall on Canadian sugar products? It’s still there, even though Canada imposes no restrictions on its sugar market.

The USMCA commits Canada to significant dairy concessions, including giving the U.S. duty-free access to nearly 4 per cent of the Canadian dairy market and scrapping a controversial discounted wholesale price for milk-based ingredients. The concessions will eventually be worth hundreds of millions of dollars to U.S. farmers.

The U.S., on the other hand, agreed in the USMCA to a modest increase in how much sugar Canada can export to the U.S. duty free, once the deal is in place. The new quota – equal to roughly another one-tenth of one per cent of the U.S. market – just barely keeps pace with past and future market growth.

Sugar, like dairy, is a relic of long-standing protectionist policies. The U.S. government tightly controls production and imports to help the domestic industry. It does this by imposing tariffs and quotas, propping up domestic prices, limiting domestic sales and making subsidized loans to sugar-beet farmers.

U.S. consumer pay for it all through sugar prices that are consistently much higher than the world price.

“For years, the U.S. sugar program has existed as one of the most blatant and grotesque examples of crony capitalism,” according to a report this year by the Washington-based Cato Institute, a free-market think tank. “Best understood as an involuntary wealth transfer from consumers to producers, the sugar program’s economic cost reaches into the billions of dollars.”

The annual cost to consumers and sugar users is as much as US$4-billion a year, according to a 2017 American Enterprise Institute report.

Canada similarly protects its dairy and poultry sectors with tariffs, quotas and strict domestic price controls. Ottawa and the provinces do not directly subsidize dairy farmers, but the World Trade Organization equates the high farm-gate prices they get to subsidies. Farmers enjoy relatively high prices, and consumers pay more.

With the USMCA, Canada gives the U.S. a significant wedge of its dairy market.

Canada’s sugar industry gets a few crumbs of theirs.

From NAFTA to USMCA: Inside the tense negotiations that saved North American trade
Subscriber content
October 9, 2018 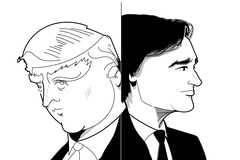 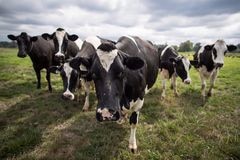 Globe editorial: Did Canada give up on China in exchange for the USMCA?
October 5, 2018 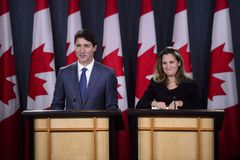