Winning a trade war was supposed to be easy, or so U.S. President Donald Trump assured everyone.

The breakdown of trade talks between the United States and China suggests this war is just getting started.

Or as Vanity Fair magazine put it in a recent headline: “Trump’s trade war just went from ‘easy to win’ to ‘5,000 years of hell.’”

Perhaps it won’t be quite that long, or as hellish. But it could certainly last years, if not decades. So buckle up.

That’s because the tariff fight between the two countries is a proxy for a much broader struggle for dominance in the digital economy. The tariffs on hundreds of billions of dollars of goods are just a prelude. And even an eventual deal to lift them won’t resolve the underlying rift.

“This isn’t going away,” insists trade economist Dan Ciuriak, a fellow at both the C.D. Howe Institute and the Centre for International Governance Innovation.

“The basis for competition between nations has shifted from brains to brute force computing, and China excels at that.”

The showdown predates Mr. Trump, and it will likely endure long after he’s gone.

Even a full breakdown of China-U.S. trade would deliver a relatively small hit to these two economic titans – perhaps a loss of 2 per cent of gross domestic product for each country, Mr. Ciuriak estimates. The tariffs imposed so far cover US$260-billion of trade, but he says that’s little more than a “skirmish" in a much longer game.

The fight is not about the price of U.S. pork and soybeans, or Chinese TVs and washing machines. It’s about a rivalry in technology.

Mr. Trump’s signing of an executive order this week targeting China’s Huawei Technologies offers a hint of how the next phase of the war could play out. Citing the company’s involvement in “activities that are contrary to U.S. national security or foreign policy interest,” the Trump administration plans to add Huawei Technologies and 70 of its affiliates to a blacklist that would ban them from buying U.S. components and technology without U.S. government approval. The Chinese company bought US$11-billion worth of key components from U.S. suppliers last year.

Beijing has promised to take “all necessary measures” in response, exposing Apple and other U.S. tech companies to possible retaliation in China.

The U.S. move marks a significant escalation. The Trump administration has already filed criminal charges against Huawei for stealing technology and violating sanctions against Iran – part of the case that led to Canada’s controversial arrest of Huawei executive Meng Wanzhou in Vancouver last year. Washington has also severely restricted Huawei’s sales in the United States, barring the use of its equipment in 5G mobile networks, citing espionage concerns. And the FBI is closely tracking the activities of Chinese researchers in the United States, worried they may be stealing intellectual secrets.

For the U.S., Chinese tech companies aren’t just a security and foreign-policy threat. They are also a growing economic threat.

The reputation of China as a producer of cheap consumer goods is at least a decade out of date. Nearly 60 per cent of its manufactured exports are classed as either medium or high tech, only marginally less than the United States. The country is patenting new inventions at more than twice the pace of the United States. And it’s catching up in research-and-development spending as a percentage of GDP.

China has also made huge technological strides in machine learning, artificial intelligence, data analytics and sheer computing power. It now rivals the U.S. in many of these areas.

As China cements closer trade and financial ties to the rest of Asia and beyond with its Belt and Road Initiative, it’s also expanding its technological reach through a parallel “Digital Silk Road.” Chinese officials have talked about creating a "community of common destiny in cyberspace” as it builds out a regional communications network of cellphone towers, fibre optic cables and e-commerce platforms. Chinese President Xi Jinping has vaguely suggested the plan might also encompass quantum computing, artificial intelligence, big data and cloud storage.

The rollout of the Digital Silk Road will increasingly put China on a collision course with big U.S. tech companies such as Apple, Google and Facebook, which also operate in the region.

For countries such as Canada, whose economies are intertwined with both countries, this technological slow-war is the worst of all worlds.

It prolongs trade uncertainty, and heightens the risk that companies, and individuals, will get caught in no-man’s land.

Opinion
Unlike Trump, China can afford to play the long game on trade
May 15, 2019 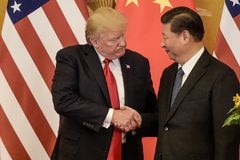 Opinion
Canada’s trade reality: stuck between a rock and a hard place Subscriber content
May 8, 2019

Opinion
Canada must use its trade weapons to respond to China now Subscriber content
May 3, 2019