Canada is suddenly headed toward a national quota for electric vehicle sales.

Mere months ago, the governing Liberals were still reluctant to commit to a so-called zero-emissions vehicle (ZEV) mandate. They were deferring to an auto industry that strongly opposes the policy, claiming it would hurt both consumer choice and domestic manufacturing.

Now, courtesy of an election campaign in which parties are trying to prove their climate credibility, a surprising cross-partisan consensus has emerged.

It started with the Conservatives, whose environmental agenda includes a proposed requirement that ZEVs make up 30 per cent of all personal vehicle sales by the end of this decade, modelled after an existing policy in British Columbia. The Liberals one-upped them when they announced their campaign platform last week, proposing a 50-per-cent target by the same date.

It’s a sign of how rapidly the ground is shifting on the transition to a clean economy, in Canada and globally, as governments elsewhere set similar policies. And the follow-through, after the Sept. 20 vote, will be an indicator of the urgency with which the next government is pursuing this country’s 2030 emissions-reduction targets.

Those targets – a 40-per-cent decrease from 2005 levels if the Liberals win power, 30 per cent if it’s the Tories – won’t be attainable without a dramatic reduction in emissions from the transportation sector, which are second only to those from oil and gas production in Canada’s carbon footprint. That will necessarily involve a rapid replacement of internal combustion engine (ICE) vehicles that with electric ones. That shift is on its way to happening eventually, but environmentalists argue it is being slowed by automakers milking every dollar from selling gas guzzlers first.

It’s clear that some people within the auto sector now see where the puck is going.

Until recently, Flavio Volpe, president of the Automotive Parts Manufacturers’ Association, which represents Canadian companies in the auto supply chain, was a vocal opponent of a ZEV mandate. He argued that, as the junior partner in a continental auto sector, Canada couldn’t afford to be too aggressive.

In an interview last week, Mr. Volpe was much more positive, in part because the United States is now going in a similar direction. U.S. President Joe Biden has announced a 50-per-cent ZEV target for 2030, though as of now it’s not binding for automakers, as Canadian ones would be.

But there is still likely to be considerable industry pushback. Canadian Vehicle Manufacturers’ Association president Brian Kingston – who represents Ford, General Motors and Chrysler – reiterated opposition to ZEV mandates, calling them “a policy that’s looking for a problem.” He says the billions of dollars that automakers have poured into EV development is proof of their intent, and Ottawa needs to focus on boosting demand, through purchase incentives and charging-infrastructure investments, rather than targeting supply.

Mr. Kingston has a point. Demand will remain a challenge until the purchase price of EVs gets closer to parity with their gasoline-fuelled equivalents, and as long as many consumers worry that keeping them powered will be more of a headache than filling the tank is.

But there is also strong evidence to suggest the automakers aren’t yet doing everything they can to shift the market toward EVs. In some parts of Canada, there are virtually none in stock, with long waiting lists that deter would-be purchasers. Neither through advertising, nor through sales promotions at the dealership level, do EVs seem to be get equal billing, let alone priority. And a ZEV mandate would obviously be incentive to change that.

So the challenge for whichever party holds power after the election will be to stand tough in the face of industry pressure to water down a ZEV mandate, while also implementing supplemental policies to make a quota attainable. Not to mention developing a strategy to help economic benefits of EV uptake flow to Canada, from the mining of battery materials through to manufacturing.

In terms of how a ZEV mandate is constructed, one big question not answered by the parties’ platforms is what the requirements will be between now and 2030. Cars and trucks sold today are durable enough to be on the road for 15 to 20 years, so there is good reason to replace ICE vehicles as quickly as possible. Ideally, that would involve a steadily rising quota for the rest of this decade, not just a large one nine years from now.

Also to be determined is whether the next government will set ZEV quotas for each province or region, not just nationally. That geographic breakdown may be needed to avoid an existing phenomenon of automakers targeting almost all their EV sales toward provinces that already have the strongest EV markets, notably British Columbia and Quebec.

And there will be other, more intricate questions about how a ZEV mandate is structured. The design will impact its effectiveness, especially around the creation of a credit market, in which companies that fail to meet a sales quota are able to buy credits from those that exceed it.

On the consumer side, when it comes to building demand, subsidies are the obvious way to help get past sticker shock. As of now, there’s quite a bit of daylight between the federal parties on this issue.

The Liberals are promising to extend an existing purchase rebate program of up to $5,000 per vehicle, with $1.5-billion in new funding for it. The NDP, which is the only major national party not to promise a ZEV mandate, wants to go further by waiving federal sales tax on EV purchases while offering rebates of up to $15,000 for made-in-Canada EVs (which would be tricky in terms of determining which vehicles qualify and complying with trade law). The Conservative platform doesn’t mention purchase incentives at all.

On EV charging infrastructure, it will be necessary to go beyond current federal supports that have mostly focused on adding stations to major highways, and address trickier problems such as the inability for many would-be EV owners to charge at home because they don’t have driveways.

All the parties seem to recognize that need, and are offering at least hints of how they would meet it. The Liberals are the only ones with dollar figures - $700-million for an additional 50,000 chargers nationally, plus another $100-million to help install them in existing buildings. The Conservative platform includes promises to add mandatory charging capacity to the national building code and ensure there’s a charging station at every federal building. The NDP says it would help subsidize chargers for new owners of ZEVs. But any of the parties would likely need a more comprehensive plan.

Similarly, all three parties are playing off recent commitments by major automakers to assemble EVs in Canada, with promises to help build an EV supply chain.

The parties are prepared to offer subsidies toward that end. The Liberals plan to draw from their $8-billion New Zero Accelerator fund for decarbonizing industry, while the Tories are pledging $1-billion specifically for EV manufacturing.

But while there are some other related commitments (such as the Liberals promising to double a mining exploration tax credit), a government looking to maximize economic opportunity from the growing EV market will need to quickly develop more specific and aggressive plans to compete.

None of this, though, is to play down the expectations for swifter EV adoption in Canada that the election campaign is setting through the ZEV mandate promises alone.

The Liberals or Conservatives could have left their promises at aspirational targets, and vowed to work with automakers to achieve them, the way that Mr. Biden has for now.

Instead, they have signalled that, for all the global momentum toward EVs, they’re not going to place too much trust in market forces alone to reduce vehicle emissions as swiftly as needed. They’ve set a level of ambition that will require more not just of the industry after this election, but of the next government as well.

Opinion
A new carbon capture subsidy is pivotal to this election’s debate about the future of the fossil-fuel industry
Subscriber content
September 9, 2021 A Canadian advantage in peril: Why the next federal government will need a plan to double our supply of clean electricity
Subscriber content
September 9, 2021 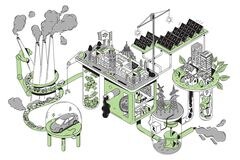 Opinion
A U.S. lurch toward carbon tariffs should have Canada (and others) scrambling
Subscriber content
July 22, 2021