To say the U.S. Federal Reserve has abruptly shifted its rate policy into neutral would be an understatement. It has put rates in park, shut off the engine and chucked the keys off the nearest bridge.

After three consecutive quarter-percentage-point rate cuts between July and October by the world’s most powerful and influential central bank, the de facto leader in this year’s global rate-cutting spree called it quits Wednesday – emphatically. Not only did it keep its key rate, the target for the federal funds rate, unchanged in a range of 1.5 per cent to 1.75 per cent, but members of the Fed’s policy-setting Federal Open Market Committee signalled that they don’t foresee a need for rates to move from that level over the next year.

The Fed didn’t change its economic growth projections one iota. It didn’t change its inflation outlook one iota. In the statement accompanying the rate decision, the Fed’s description of the state of the U.S. economy was identical – I mean, word for word – to six weeks ago, when it last cut rates.

What did change, apparently, is its confidence.

The Fed’s rate-cut announcement in late October featured one pivotal word: “uncertainties.” The Fed, together with much of the rest of the world, was riddled with doubts about a sputtering global economy, slowdowns in trade, manufacturing and business investment – and the U.S.-China trade war that was behind all this foreboding. The Fed bundled all this together under the term “the implications of global developments” (central bankers are nothing if not cryptic), and indicated that they have created “uncertainties” about its economic outlook.

In Wednesday’s shift-to-neutral statement, “uncertainties” had disappeared. “Global developments” no longer had any “implications.” No rate cut, no worries. Nothing to see here.

The lack of a cut wasn’t the surprise; Fed chairman Jerome Powell had been signalling since the last cut that the Fed was ready to step to the sidelines and admire its work for a while. What’s remarkable is how quickly all that uncertainty has washed clean from the Fed’s message. Maybe too quickly. There are still plenty of things to feel uncertain about – and while a few rate cuts may have diminished some of them, they didn’t make them go away.

There’s little doubt that global conditions have improved over the past six weeks. There is mounting evidence that the worldwide slumps in manufacturing and trade may have stabilized; the fears of an outright global recession have subsided. The swift action of central banks (the Bank of Canada, notably, not among them) to cut rates has received plenty of the credit – frankly, more than it deserves.

The rate cuts certainly changed the tone in the financial market, and delivered some important stability. But every economist knows that in terms of their big-picture impact on economic activity, rate cuts just don’t work that fast. It takes many months for a rate change to work its way through an economy, and up to two years before its full effect is felt.

Which raises a couple of questions. On the upside, if the global economy has found its feet this quickly, then maybe the Fed was too hasty and aggressive with its cuts – especially with a U.S. economy already at full employment and with little obvious need of additional monetary stimulus. On the other hand, if the global improvement is little more than a short-lived confidence boost from the rate cuts, one has to be concerned about what happens when the buzz wears off.

Let’s not forget that the global trade picture is still far from clear. Yes, the renegotiated North American trade pact is back on track for final ratification, which has removed one area of doubt that has held back North American business. But the U.S.-China trade dispute remains unresolved. In a news conference following Wednesday’s rate decision, the Fed chairman acknowledged that the U.S.-China situation is the far bigger obstacle of the two.

And that situation is headed for a key deadline that could shake that newfound confidence of the global economy and markets. Without some sort of deal by this Sunday, a new round of U.S. tariffs will kick in on another US$160-billion a year of imports from China; the Chinese government is all but certain to retaliate. On the other hand, a last-minute deal could remove a massive roadblock for the U.S. and global economies. A third possibility – a postponement – would certainly perpetuate the uncertainty hanging over the global economy.

Either way, the Fed’s assumptions may face some challenges. This isn’t an environment where it can get too comfortable. 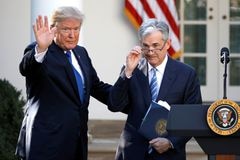 Opinion
U.S. GDP report could be papering over some widening cracks Subscriber content 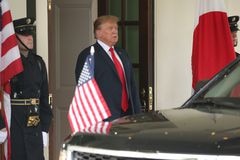 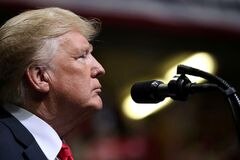