Hugh Stephens is a Distinguished Fellow at the Asia Pacific Foundation of Canada, and principal, Trans-Pacific Connections. He has more than 35 years of government and business experience in the Asia Pacific, including postings to five Canadian missions in Asia. He is currently president of the Victoria branch of the Canadian International Council and an associate faculty member in the School of Business at Royal Roads University in Victoria.

Amid all the commentary in the early analysis of the new NAFTA (or USMCA) about the costs for Canada of compensating dairy farmers or absorbing increased drug costs as a result of extending pharmaceutical patents, one small item buried in the fine print has been largely overlooked: Article 32.10.

Hidden in the clean-up chapter dealing with “Exceptions and General Provisions,” this article (in plain English) gives the United States a veto over any future trade agreement between Canada and China, and if the United States doesn’t like what we have negotiated, we get kicked out of the United States-Mexico-Canada Agreement. Not only that, we have to inform the Americans 90 days before we enter negotiations with China, and reveal the full text to them prior to concluding negotiations. Of all the penalties we have had to pay to get the North American free-trade agreement essentially renewed, this is the highest. We have just sacrificed our independent trade (and arguably foreign) policy on the altar of the USMCA. What were our negotiators thinking?

The reality, of course, is that in dealing with the United States, Canada’s position was almost entirely defensive. We were trying to keep what we had under NAFTA. No new market access for Canada was created by the USMCA. Rather, we fought to keep as much of what existed under NAFTA as possible. Presumably, at the last moment, the Trump administration dispensed the poison pill of Article 32.10, and Canada felt it had no choice but to accept. It was not about to fall on its China sword and lose preferred access to the U.S. market.

You will note that the word China is not mentioned in the article. Instead, it refers to a “non-market country,” with the definition of such resting unilaterally with one member of the agreement as determined by that member on the date of the signature of the USMCA. Donald Trump has cranked up a trade war with China and he is not about to allow Canada or Mexico to assist the Chinese to fight that war in any way. In effect, Mr. Trump is ring-fencing North America as off-limits to any Chinese trade initiatives.

The most charitable interpretation is that the United States was worried about dumped and subsidized Chinese products finding their way to the U.S. market via Canada or Mexico, like their current concerns with Chinese steel. But there are other, far less draconian measures available to deal with such circumstances. No, this was about containing China, and circumscribing Canadian options.

This bombshell came out of the blue. There was no advance notification to any stakeholders in Canada. No opportunity to provide input to the government or to mobilize opposition. It is just there – a fait accompli.

Perhaps part of the calculation of the Canadian negotiating team was that any negotiations with China will likely take a very long time, and a lot could change in that time. It took Australia a decade to conclude a free-trade agreement with China. Perhaps they thought that in future there will be a different U.S. administration with a less confrontational approach to China. Maybe the focus will shift to weaning China off its current economic policy and move toward a market-oriented economy, although the United States can decide whether China meets the market-economy standard. There is even the possibility that some day, China might negotiate to join the Comprehensive and Progressive Trans-Pacific Partnership – although the United States has not yet made that decision itself.

These are all possible calculations, but in the end, the reality is that Canada’s push for trade diversification has just taken a major blow.

This has been sprung on the Canadian public. We are owed an explanation from the government as to how Article 32.10 and trade diversification are compatible.

Opinion
Don’t celebrate just yet. USMCA is far from being a done deal
October 2, 2018 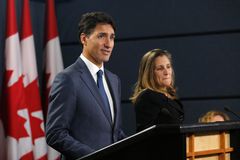 Globe editorial: With USMCA, Canada holds its own in the unnecessary, absurd Trump reality show
October 1, 2018