Michael Smart is a professor of economics at the University of Toronto and co-director of the Finances of the Nation project, which aims to provide easy-to-understand analyses of taxation and government spending in Canada.

As Ottawa prepares for a Throne Speech and a fall economic recovery plan under new Finance Minister Chrystia Freeland, the country is at a crossroads. How will we respond?

In the dire economic situation after the pandemic lockdowns, Ottawa had to act. And act it did, borrowing massively to fund new measures to insure families and businesses against declines in income.

And so federal debt is rising sharply. By the end of this year, federal net debt will likely increase to 55 per cent of GDP, compared with 31 per cent last year. That will be the largest single-year change in our history.

And there will be more. While signs of economic recovery in Canada are encouraging, a prolonged recession ahead of us is a real likelihood. The emergency measures should be unwound as the crisis resolves, but the red ink will flow for several years. Based on Canada’s experience in past recessions, we should expect the deficit to rise above last year’s level for the next three to five years.

That would bring the debt to 65 per cent of GDP by 2025, a level not seen since the fiscal crisis of the 1990s. Debt watchers have already taken note, and they are understandably worried.

But should they be? With long-term interest rates now below 1 per cent, the share of the federal budget that goes to servicing the debt has never been lower than it is right now. And that fact is leading to a fundamental rethink of our fiscal policy options.

In the traditional view, government borrowing inevitably implies higher taxes at some point, when debt is retired. Because those future taxes will create economic distortions, the debt-financed spending of 2020 is seen as costly. And those costs will be borne by future generations, creating problems of intergenerational equity.

But what if we simply never pay it back? As the debt matures in future, it could simply be rolled over with new bond issues. The new debt now being issued would still have costs, since the bonds would pay interest forever. But in the current low-rate environment, those costs are much smaller than before.

Because interest rates have been lower than economic growth rates for the past several years, Ottawa has been able to run modest primary deficits and still have the federal debt grow more slowly than our overall economy. That is reassuring to bond markets, and it makes permanent debt rollovers a sustainable policy.

If interest rates remain below economic growth rates after we recover from the pandemic, then the new debt incurred this year should be sustainable as well, even if we never pay it back.

Gambling on future growth and interest rates may be less risky than it seems. After major economic depressions in our past, economic growth exceeded interest rates for decades at a stretch, allowing past governments to gradually reduce the debt without undue hardship for Canadians. In fact, in historical terms, the fiscal crisis of the late 1980s and early 1990s was an aberration – the only period since 1900 when interest rates exceeded growth rates for an extended period.

If the low interest rates persist in the decade to come, then debt should begin to fall gradually as a percentage of GDP, even if Ottawa continues to run small deficits. This idea is surely driving the thinking about the crisis in Ottawa today.

But there are caveats. Interest rates could rise again, or growth could founder. And the fiscal room gained from even the current low rates is relatively small. It cannot generate enough budget savings to finance large, permanent new spending programs without raising taxes.

Meanwhile, the fiscal pressures from the aging population will weigh ever more heavily on Canadian governments. The larger federal debt could make that far more challenging.

There is also the problem of accountability. Prime Minister Justin Trudeau had committed his government to reducing the debt’s share of GDP as recently as last year. If that commitment is abandoned, then what is the government’s fiscal anchor? The bond rating agencies, at the very least, will want to know.

The low-interest environment is not a panacea for fiscal policy, and the resulting budget savings are small. It simply means that the emergency measures are not leading to an unsustainable increase in the debt. And that fact might help Canadians of all political stripes to sleep at night.

Opinion
A wealth tax won’t work to fix the coming debt crisis: we need a consumption tax like the GST
August 9, 2020 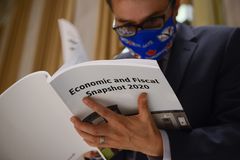