When Saudi Arabia assumed the G20 presidency in December, it unveiled an agenda steeped in surrealism.

The kingdom plans to shepherd the international economic forum’s work on issues such as women’s empowerment, combatting corruption, and promoting global trade and investment during its year-long term. That miscellany of topics will be discussed at more than 100 meetings and conferences, culminating in the leaders’ summit in Riyadh in November.

“We, in the Kingdom, are currently undergoing a historic transformation under our Saudi Vision 2030 that aims to foster a vibrant society, a thriving economy and an ambitious nation,” reads King Salman bin Abdulaziz Al Saud’s statement on the Group of 20′s website. “The Kingdom will work with G20 members to exchange experiences, solidify global co-operation and find solutions for the world’s most pressing challenges of the 21st century.”

Talk about cognitive dissonance. Saudi Arabia doesn’t have the moral authority to lead on any of those issues given its abysmal human-rights record, proclivity for corruption and volatile approach to international relations. The Saudi presidency undermines the legitimacy of the G20, whose members represent three-quarters of international trade. It also lends credibility to the kingdom’s propaganda campaign to rehabilitate its image after the grisly murder of Washington Post journalist Jamal Khashoggi at the Saudi Consulate in Istanbul.

Canada should boycott this farce. Mr. Khashoggi’s killing was just 15 months ago and in that time, Saudi Arabia has given the world plenty of reasons to question its rectitude. Crown Prince Mohammed bin Salman, who governs on behalf his father, still denies ordering the murder and continues to stonewall independent investigators.

International investors are also dubious. Foreign direct investment flows to Saudi Arabia were US$3.2-billion in 2018 – a far cry from its 2008 peak of US$39-billion. Fitch, meanwhile, downgraded Saudi Arabia’s credit rating last September after an attack on its oil facilities, expressing doubts in its ability to manage geopolitical tensions. Global investors also balked at the kingdom’s initial US$2-trillion target valuation for Saudi Aramco ahead of its initial public offering last year.

There have already been calls for Canada to boycott the Riyadh summit. Chief among those critics is Agnès Callamard, the United Nations special rapporteur on extrajudicial, summary or arbitrary executions, who investigated the murder of Mr. Khashoggi and determined he was a “victim of a premeditated extrajudicial execution” by 15 Saudi state agents.

“The holding of the G20 in Saudi Arabia next year is a slap in the face of all those who have fought, and some of whom have died, for accountability and for human-rights protection,” Ms. Callamard said on CBC News Network’s Power and Politics show last July.

Such sentiments were echoed in a July statement by the federal NDP: “The atrocities committed by the Saudi regime are not consistent with Canadian values. Canada should not take part in the upcoming G20 summit in Riyadh.”

Even so, it appears Canadian officials plan to attend. "Participation in the G20, the primary forum for international economic co-operation among the world’s major economies, allows for Canada to emphasize issues of importance to us, including: defending the rules-based international order, advancing women’s equality and economic empowerment, building economies that benefit the middle class and those working hard to join it, and protecting our shared environment for future generations,” Global Affairs Canada said in a statement to The Globe and Mail.

The G20 Saudi Secretariat didn’t respond to a request for comment.

It’s delusional to suggest that Saudi Arabia can guide the G20’s work on enhancing global trade and investment when it’s still feuding with Canada, one of the world’s largest economies. The diplomatic and trade war began in 2018 after then-foreign affairs minister Chrystia Freeland tweeted legitimate criticism of the jailing of women’s rights activist Samar Badawi. (She’s the sister of jailed Saudi blogger Raif Badawi, whose family is Canadian.)

Not only did Saudi Arabia expel Canada’s ambassador and recall its own, it banned Canadian wheat imports and halted new trade deals among other moves. For its part, Canada imposed sanctions on 17 Saudis linked to Mr. Khashoggi’s murder and began a review of arms sales to the kingdom and a moratorium on new export permits.

“While this review is ongoing, no new permits have been issued," added Global Affairs Canada, adding sanctions against the Saudi nationals remain in place.

Ottawa has reason to be concerned; there were eight Canadians imprisoned in Saudi Arabia as of Dec. 30, 2019.

If Saudi Arabia can’t respect basic human rights, how can it possibly champion the G20 goal of shared economic prosperity? This is no time to go along to get along. In addition to boycotting the summit, Canada should lead a campaign to suspend Saudi Arabia’s G20 membership. There’s precedent for such a move: Russia was kicked out of the Group of Eight for violating international law.

“Trade and investment are key drivers of growth, innovation, and job creation,” reads the Saudi G20 agenda. “They require an open, transparent and supportive policy environment as well as a well functioning rules-based multilateral trading system.”

Such sanctimony. This is the country that eschewed a foreign listing for Aramco to limit disclosures, lobbied the Organization of the Petroleum Exporting Countries to prolong production cuts to inflate its share price, and then leaned on affluent citizens and royal family members – many of whom were targets of the 2017 corruption crackdown – to prop up the oil company’s stock.

The G20 bills itself as “the premier forum for international economic co-operation.” It’s supposed to be a highbrow gathering of the world’s largest economies – not a symposium for Saudi make-believe. Canada should boycott this charade. 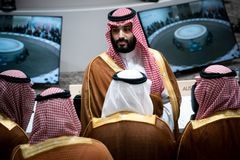