From the day last June that Richard Baker announced his aim to take Hudson’s Bay Co. private, the biggest bone of contention has been the value of the retailer’s real estate.

On Tuesday, HBC released appraisals of its 79 store locations from Montreal to Vancouver to Manhattan to Beverly Hills. These are the calculations the special board committee used to assess the bid by Mr. Baker, HBC’s New York-based executive chairman, and his allies before recommending it last month.

Tuesday’s document dump won’t turn the large minority shareholders who oppose the $10.30-a-share bid into fans. But it does throw into stark relief how difficult it is to arrive at some of the higher real estate values that dissidents have long said HBC should tout – and that the bid should reflect.

The release of the detailed appraisals, conducted by Cushman & Wakefield and CBRE, comes after the filing of the directors’ circular for the bid on Friday. That showed HBC’s financial adviser TD Securities calculated the range of fair market values for HBC stock at $10 to $12.25 a share. In October, the board recommended accepting the offer after Mr. Baker’s group, which control 57 per cent of the shares, sweetened it by $100-million.

The evaluations contain a range for each property based on various scenarios, such as “as-is” based on forecast store sales, and “if leased at market rates” and “if subdivided and leased to numerous tenants.” There’s also a “dark” category assuming a store was empty, such as in a bankruptcy scenario. The worth of each varies a great deal within those.

Each store gets appraised based on the rent it generates, the capitalization rate – or ratio of net operating income to property value – and the debt against it. HBC also operates some of its stores in joint ventures with RioCan Real Estate Investment Trust and Simon Property Group, so the values reflect its percentage ownership within the per-share calculation.

If there’s one striking aspect of the worth of the HBC real estate, it’s the agony and ecstasy of its stores in various markets: some the grand, old heritage Bay stores that Canadians in major cities grew up with, others mall locations in suburbs in Canada and the United States sporting its major Hudson’s Bay and Saks Fifth Avenue banners.

At the top sits the flagship Saks store at 611 5th Ave. in New York, with an as-is value of US$1.6-billion. Built in 1923, the building, across from Rockefeller Center, is in one of the world’s best-known locales. With the debt applied, the equity value for HBC is pegged at $429-million, or $1.70 a share. At the opposite end is the 93-year-old Bay store at 450 Portage Ave. in Winnipeg, with its top three floors vacant. The appraisal gives the threadbare site a current as-is value to the HBC operation of $0, if leased to the retailer at an economic rate that accounts for rent, operating costs and future sales.

In both cases, it is not clear what a buyer might offer. Another retailer, for example, could be as wary as HBC is of the industry’s flagging operating results in competition with online shopping rivals, or the outlook for real estate in its own region, or capital it might have to invest. A prospective buyer seeking to convert a property into another type of business – say, residential – may have to shell out much more on renovations or even reconstruction.

This makes the real estate value a tough hill to climb for any potential rival bidder, whether it’s an industry competitor or a real-estate specialist looking to generate rental income from HBC.

As it stands, investors see little chance of a richer offer with that more aggressive view. At a Toronto Stock Exchange price of $9.08 on Tuesday, the biggest risk the market is grappling with is that the current bid falls through when shareholders vote on Dec. 17. 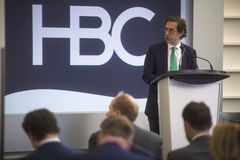