There is a service that tracks corporate jet flights, including the aircraft used by executives at Canada’s banks, and sells details on the journeys to hedge funds looking for insights into potential takeover targets.

If Bank of Montreal’s jet is flying to Dallas, it just might be because chief executive Darryl White is planning a Texas acquisition. So an aggressive fund manager would load up on shares in regional banks based in the Lone Star state. If Toronto-Dominion Bank’s plane heads to Atlanta, that hedge fund would jump into Georgia-based banks.

Bank CEOs are aware their every move is being tracked and find the attention paid to their planes amusing, and a waste of time. No CEO is going to give away a top-secret takeover by parking the company’s Learjet near a target. For bankers, corporate travel reflects meetings with customers and visits to far-flung operations. However, the attention being paid to business jets speaks to growing expectations that after a four-year pause, Canadian banks will once again use acquisitions to bulk up in the U.S. market.

Last year, merger and acquisition activity in the highly fragmented U.S. banking industry doubled, to US$59-billion in deals. The pace of consolidation has been increasing steadily since the 2008 financial crisis. Canadian banks are all major players in the U.S. market, yet the last major deal involving a domestic institution was CIBC’s US$5-billion purchase of Private Bancorp in 2016.

“We expect rising M&A activity, particularly as the pressure to generate earnings growth in a low rate environment causes banks to focus more on expenses,” said a recent report from Rob Wessel, managing partner of Hamilton ETFs, a fund manager that focuses on financial stocks. He said: “Should acquisition activity accelerate – particularly among the regional banks – it is likely the Canadian banks will participate to preserve their competitive positions.”

Canadian bank CEOs never say never to takeovers. However, they all like to point out that organic growth – winning over one American customer at a time – can pay far higher dividends in the U.S. market than a flashy but expensive acquisition.

For example, BMO has built a substantial U.S. presence over four decades, with branches across the Midwest and a national digital franchise. Mr. White highlighted BMO’s 11-per-cent year-over-year increase in deposits from U.S. customers, who now have US$87.2-billion at the bank, alongside $191.5-billion in deposits from Canadian clients. In an interview last week, Mr. White said BMO can keep expanding U.S. market share by bringing the resources of its North American platform – BMO’s capital, technology and marketing savvy – into a competition with far smaller regional players.

For Canadian banks, U.S. acquisitions remain a relatively expensive proposition. The last big wave of southbound takeovers, just after the financial crisis in 2010, saw TD snap up four banks in Florida for their book value, or even less. Buying a business for less than it is worth is always an attractive proposition.

Bargains like this are far harder to find after a decade-long economic boom. U.S. bank stocks traded at an average of two times their book value for most of last year, according to Standard & Poor’s Financial Services LLC. That premium price explains why Canadian banks stayed on the sidelines. However, the numbers underlying takeover will get compelling if last week’s stock market downturn continues and further knocks back the valuations of U.S. bank stocks. The U.S. Federal Reserve is expected to cut interest rates this year to stimulate the American economy, a move that would hammer profits at regional banks.

The most recent data from S&P, compiled at the end of January, show U.S. banks stocks traded at an average of just 1.47 times their book value. The price tag fell even further last week. As valuations of U.S. banks continue to drop, Canadian banks may pounce. Just don’t expect to find their targets by tracking the bank’s corporate jets. 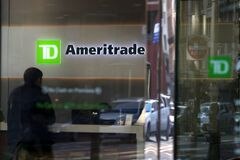 Opinion
Canadian banks need to prepare for open banking now or risk being left behind
October 1, 2019