In March, Glossier, a millennial-focused beauty brand that began as a blog, achieved unicorn status, becoming the latest privately held company to attain a valuation of US$1-billion. “You have now entered a people-powered beauty ecosystem,” the company’s homepage announces. “Beauty isn’t made in a boardroom – it happens when the individual is celebrated.”

The line is a philosophical throw-down to elite cosmetics companies of old – the ones that created and carefully guarded an extremely narrow definition of beauty. But it’s also a nod to how women have harnessed the power of social media to upend a decades-old consumer-culture narrative, seemingly overnight.

I witnessed this disruption from my front-row seat at Chatelaine, Canada’s iconic women’s magazine, where I took the helm in 2015. At that time, most advertisers didn’t want to be anywhere near journalism that challenged the “lifestyle mag” status quo, and they wouldn’t dream of using the word “feminist.” (This was before Beyoncé, Chimamanda Ngozi Adichie and Team Trudeau helped put the word back on the map … and on T-shirts, and on throw pillows at Urban Outfitters.) Women’s magazines were built on the top-down beauty model that Glossier rails against. The most powerful ones have always served as gatekeepers, directing their audience as to what successful womanhood looks like (young, thin, fair-skinned and so on), and then selling products to help them inch closer to this ideal. This is of course not a radical statement, it’s simply fact – or it was when I started my job.

But then something revolutionary happened: Increasingly, with the explosion of social media, women started talking directly to each other, bypassing a host of gatekeepers altogether. Social platforms helped push women’s issues to the forefront and opened up unmediated spaces for long-suppressed voices and perspectives – from women of colour, members of the LGBTQ community, Indigenous women, unapologetic feminists from those or other communities, and those lobbying for body positivity. The Women’s March and movements such as #MeToo took form, and countless other overdue conversations that had been relegated to quiet, private exchanges – about motherhood, gender expectations and, yes, beauty – spilled into public forums. All of a sudden, it was impossible to keep ignoring the simple fact that women are not (nor have they ever been) a monolith.

For marketers, the rising chorus of women tired of being told they’re not young enough, thin enough or generally attractive enough has changed everything in a few short years, and it’s drowned out the gatekeepers with alternative points of view: You can go grey and be sexy; you can be a size 18 and love your body; bras can and, in fact, should be comfortable. And by the way, Day-Glo makeup isn’t only for women. (The campaign for Glossier’s new Play line of “dialled-up makeup extras” stars Australian singer and queer icon Troye Sivan.) Instead of laying down the beauty gospel, thriving women-founded direct-to-consumer brands – such as Glossier, Canada’s Knix and millennial athleisure brand Outdoor Voices – rely on user-generated content and feedback to drive product development and marketing campaigns, and they’re creating brand superevangelists in the process.

As a result, for the first time in history, insecurity doesn’t sell and there’s an economic imperative to telling women they’re A-okay as they are. It’s a stunning development and one that has sent many former gatekeepers scrambling to rewrite scripts and recast shoots – all so they can be invited back in. In 2016, Women’s Health magazine vowed to stop using the phrase “bikini body” and beauty bible Allure dropped the term “anti-aging” in late 2017. We now regularly see public-transit ads from brands projecting images of women in all different shapes, colours and sizes. Cosmetics brands now produce makeup in 40 skin tones instead of eight shades of white – because Rihanna’s Fenty brand, launched in 2017, has made it an industry standard. Serena Williams is held up in Chase Bank ads as the inspirational model of motherhood – soft, powerful, reflective and ambitious all at the same time. Human, even.

But this shift is only the beginning; The fact is, the old marketer’s playbook is becoming less relevant by the day. With women controlling US$18-trillion in global spending, the stakes are high. Recently, George&Co., the content company I launched last year, partnered with Abacus Data to ask Canadian women a host of questions about everything from advertising imagery to who they trust in the changing media landscape. Not surprisingly, only 16 per cent of women say lifestyle media helped them make recent purchasing decisions. More than any magazine, celebrity or social influencer, women trust reports from other people who’ve tried a product – intel shared from real person to real person, be it friends, family members or unnamed customers sharing reviews.

The brands that figure out how to enable that honest exchange – how to champion the individual – win. Because the old model, the one where brands get to call all the shots, has been cracked wide open – and the wrinkle cream is not going back in the jar.

Lianne George is creative director of George&Co. in Toronto, former editor-in-chief of Chatelaine. This column is part of a series on women and marketing, in partnership with Abacus Data.

Opinion
Women are no longer buying the marketing fantasy
July 10, 2019 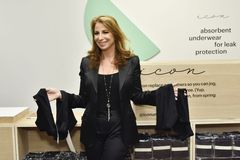