Canadian inflation surged in August at the quickest pace since 2003, fuelled by the summer reopening and other pandemic factors, and causing a stir on the campaign trail ahead of next Monday’s federal election.

The consumer price index (CPI) jumped by 4.1 per cent in August from a year earlier, Statistics Canada said on Wednesday, up from 3.7 per cent in July. For five consecutive months, the annual rate of inflation has exceeded the Bank of Canada’s target range of 1 per cent to 3 per cent.

However, the central bank expects higher inflation will be temporary, and some financial analysts said on Wednesday that price increases should slow in the coming months.

Inflation has been rapidly rising this year, in part because of comparisons to soft prices after COVID-19 hit in 2020, but also from a recent flood of consumer cash into hard-hit service industries, a frenetic housing market and supply chain disruptions that have led to product shortages.

In August, prices rose in seven of eight major components on an annual basis, paced by an 8.7-per-cent climb in transportation costs. Excluding gasoline, annual inflation rose by 3.2 per cent.

Despite a recent acceleration, overall price levels were only slightly higher than they would be if they had grown at the Bank of Canada’s 2-per-cent target since the pandemic began.

The inflation report still made a splash on the federal campaign trail. In Halifax, Liberal Party Leader Justin Trudeau tried to put Wednesday’s data in the context of the broader economic recovery.

“Let’s recognize that our country and our world is bouncing back, coming roaring back in Canada’s place, from an extreme crisis of this pandemic that has caused a lot of disruption, and yes, is increasing prices,” Mr. Trudeau said.

He added that the Liberals would address cost-of-living issues through their $10-a-day child-care plan and measures for first-time buyers in the housing market.

In Jonquière, Que., Conservative Party Leader Erin O’Toole said a Tory government would aim to bring down consumer prices by encouraging competition among cellphone and internet providers and by taking a tougher stand on grocery store price-fixing.

The Conservative platform suggests giving foreign telecom companies more access to the Canadian market, and raising the maximum fine on competing food retailers who work together to raise prices on some items.

In Essex, Ont., New Democratic Party Leader Jagmeet Singh spoke about inflation in terms of housing affordability. The NDP promises 500,000 affordable housing units over the next 10 years, and the party wants to see the reintroduction of 30-year amortization periods for CMHC-insured mortgages for first-time home buyers, which would reduce monthly payments.

Campaign discussions about inflation have largely focused on the cost of living, a concept related to inflation, but not identical. Statscan’s CPI measures the changes in the purchasing power of money over time, not how much money Canadians have relative to their monthly expenses.

Inflation is an affordability issue when wage increases don’t keep up with price increases – as is the case in overheated housing markets.

Real estate continues to exert upward pressure on the CPI. The homeowners’ replacement cost index, which approximates the cost of maintaining a home and is tied to the price of new structures, rose by 14.3 per cent in August, the largest annual increase since 1987. Atlantic Canada had particularly steep hikes in rental costs, as well.

The effect on prices of reopening was evident in travel, which drew more consumer interest this summer. Airfares surged 34 per cent from a year ago, while hotel prices jumped 20 per cent.

As part of its outlook, the Bank of Canada says global supply chains should eventually normalize, although the timeline is uncertain.

Rolling lockdowns, coupled with robust consumer demand, have made it tough for companies to source key materials. In addition, a logjam of orders to send around the world is driving up shipping costs. To protect their profit margins, many companies are passing higher costs on to consumers.

The impact has been acute in the automobile industry, which has curbed production amid a global shortage of semi-conductors, reducing supply at dealerships. The Statscan report showed that new vehicle prices rose by 7.2 per cent in August, the largest annual increase since 1994.

Despite the run-up in prices, several analysts said on Wednesday that annual inflation should soon begin to decelerate, as temporary factors related to the pandemic fade.

“I think we have likely reached a peak for inflation,” said Royce Mendes, senior economist at CIBC Capital Markets. “Now, by the end of the year, could it still be above 3 per cent? I think that’s likely.”

One possibility, Mr. Mendes added, is that a rise in COVID-19 cases because of the Delta variant could lead to weaker consumption in key areas that make up the CPI, such as travel, dining and entertainment. As a result, prices could fall. That appears to be happening already in the United States, which has struggled with a recent wave of Delta-driven infections. The U.S. reported on Tuesday its annual inflation rate ebbed slightly to 5.3 per cent in August, from July’s 5.4 per cent, with a sizable pullback in travel prices.

In Canada, spending on hospitality levelled off in August, and has been sliding for weeks on travel, according to high-frequency expenditure data from Royal Bank of Canada clients. The bank said in a report that the Delta variant appears to be disrupting holiday plans.

While inflation has been above the Bank of Canada’s target range since April, the central bank is still a long way from raising interest rates. It has kept its key policy interest rate at 0.25 per cent since the start of the pandemic, and has said it won’t raise rates until the difference between what the economy could produce and what it is producing is absorbed. The bank’s most recent projection doesn’t expect this to happen until the second half of 2022.

The central bank’s latest projections show inflation remaining above 3 per cent for the rest of the year, and moving closer to 2 per cent next year. It does not expect inflation to sustainably return to 2 per cent until 2024.

Opinion
The most overblown warning in personal finance has been that rising rates will crush borrowers
Subscriber content
September 14, 2021 Opinion
Who will pay for the pandemic? Don’t ask our politicians
Subscriber content
September 13, 2021 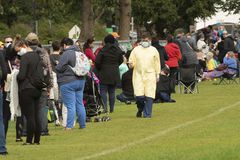