Major landlords are ramping up incentives to lure new tenants after the COVID-19 epidemic crushed demand for rental housing – an abrupt change from before the crisis.

The eCentral building in midtown Toronto, owned by RioCan REIT, is offering one month of free rent for select units. A building in Toronto’s west end is giving out $1,000 pre-paid Visa cards to new leasers. And the Grid 5 Apartments in downtown Calgary, owned by Killam Apartment REIT, is doling out $1,000 signing bonuses.

It’s not unusual for larger landlords to offer incentives to drum up interest. However, the pandemic has brought out a higher level of competition to entice a weaker flow of tenants, including in Toronto and Vancouver, where incentives are rarely needed.

“Once the incentives start, they do become common, as rental providers have to compete more with each other, and eventually tenants start to expect them,” said Shaun Hildebrand, president at real estate consulting firm Urbanation.

For years, before the pandemic, rental demand was so overwhelming and purpose-built construction so meagre that searching for an apartment in many urban centres was practically a blood sport, with giant lineups, occasional bidding wars and surging rates.

Eventually, developers looked to capitalize. There were more than 50,000 purpose-built rental unit completions across the country in 2019, according to the Canada Mortgage and Housing Corp. – the highest tally in decades. Plenty more supply is on the way.

But since COVID-19 hit Canada, rental demand has been slammed by restrictions on immigration, remote learning at universities and rampant job losses that have affected household finances. With virus cases on the rise again, it’s uncertain when demand will fully rebound.

Park Property Management, which has roughly 8,750 units spread across 72 buildings in Ontario, is offering incentives in Toronto and in places where student demand has dried up, such as Waterloo. Incentives are a “newer thing” for the company, said senior vice-president Margaret Herd, with one month of free rent being a common offer.

“People are shopping around now,” said Ms. Herd. “It’s like when you get a sale on a car.”

The Toronto market is undergoing a massive shakeup. Out of 50 purpose-built apartment complexes in the city tracked by Urbanation, 29 have offered incentives during the third quarter. This includes free parking, one or two months of free rent, and move-in bonuses of up to $1,500.

“I’d say it’s been more than 10 years since we’ve seen incentives to any meaningful level in Toronto,” Mr. Hildebrand said.

Another factor in Toronto, Ms. Herd said, is that tighter restrictions on short-term rentals (such as Airbnb) are forcing some investors to find long-term tenants, contributing to a recent surge of new supply in the city.

“If you want to live downtown, there’s an awful lot [of units] available,” she said.

In Alberta, rental demand has been tepid for years because of economic weakness, and the market is no stranger to incentives. Still, the pandemic has added another complication, forcing many landlords to increase their offerings.

The province has “seen discounting and incentives pretty much across the board, and we have certainly adopted the same approach to remain competitive,” Minto Apartment REIT chief executive Michael Waters said in an August earnings call.

The company’s website shows three buildings in Edmonton that are offering three months of zero rent. A Minto spokesperson said that, depending on the property and market conditions, signing bonuses are on offer for lease renewals.

Boardwalk REIT, which has heavy exposure to Alberta and Saskatchewan, has “selectively increased the use of incentives for new rentals during the pandemic to increase our occupancy,” CEO Sam Kolias said during an earnings call last month.

Killam Apartment REIT is “likely always offering incentives in certain markets,” executive vice-president Robert Richardson said by e-mail. The company is giving renters a partial or full month of free rent at a number of properties in Alberta and Newfoundland and Labrador. “Today’s energy-reliant economies are not as strong as in previous years,” he said.

For landlords, there are further headwinds. The Ontario government said last week it was moving to freeze residential rents in 2021. (They were supposed to rise by 1.5 per cent, as dictated by rent-control guidelines.) Shares of apartment REITs tumbled on the news, adding to already substantial losses in 2020.

For tenants, the situation is a rare reprieve. Several rental sites have published data showing monthly rates are on the decline, unwinding a portion of massive gains that many markets saw over the past decade.

Still, looking beyond the pandemic, tight markets such as Toronto will continue to grapple with insufficient supply, while stronger demand will curb the need to offer incentives.

“We’re undergoing a temporary softening in the rental market, which was purely the result of a once-in-a-century pandemic,” Mr. Hildebrand said. “After we work our way through this, we’re going to find the [Toronto] market is still undersupplied from a long-term standpoint.”

Rents, he said, will “continue to escalate.” 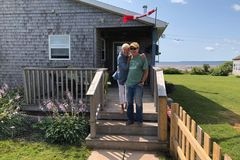