Mr. Trump, who has accused China of unfair trade practices and pushed for a deal that would rebalance the relationship in favour of U.S. manufacturers and workers, said late Friday the U.S. will boost tariffs on US$250-billion of Chinese goods to 30 per cent on Oct. 1, up from 25 per cent. He also said tariffs on a further US$300-billion of goods set at 10 per cent starting Sept. 1 will rise to 15 per cent.

....better off without them. The vast amounts of money made and stolen by China from the United States, year after year, for decades, will and must STOP. Our great American companies are hereby ordered to immediately start looking for an alternative to China, including bringing..

....all deliveries of Fentanyl from China (or anywhere else!). Fentanyl kills 100,000 Americans a year. President Xi said this would stop - it didn’t. Our Economy, because of our gains in the last 2 1/2 years, is MUCH larger than that of China. We will keep it that way!

It’s unclear what legal authority Trump would be able to use to compel U.S. companies to close operations in China or stop sourcing products from the country.

China on Friday said it would impose retaliatory tariffs on US$75-billion of U.S. goods, targeting crude oil for the first time and renewing punitive duties on U.S.-made autos.

The latest salvo was in response to Mr. Trump’s plans to impose tariffs on a final US$300-billion list of Chinese-made consumer goods on Sept. 1 and Dec. 15, including cellphones, toys, laptop computers and clothing.

China’s Commerce Ministry said that on those same dates it will impose additional tariffs of 5 per cent or 10 per cent on a total of 5,078 products originating from the United States, including agricultural products such as soybeans, beef and pork, as well as small aircraft. Beijing is also reinstituting tariffs on cars and auto parts originating from the United States that it suspended last December as U.S.-China trade talks accelerated.

“China’s decision to implement additional tariffs was forced by the U.S.’s unilateralism and protectionism,” the Chinese Commerce Ministry said in a statement.

“We want a deal, but it doesn’t mean we want a deal that is not based on mutual respect or good for China’s interests,” a Chinese diplomatic source said. “If the United States levies tariffs, China will have countermeasures.”

Markets, already reeling from months of trade tensions between China and the United States, reacted swiftly to the escalating conflict.

The S&P 500 fell 75.84 points or 2.6 per cent, marking the index’s third decline of 2 per cent or more this month and wiping out several promising rallies since last Friday. The Dow Jones Industrial Average fell 623.34 points or 2.4 per cent.

Canadian stocks were hit hard as well. The S&P/Composite Index fell 215.88 points or 1.3 per cent, as economically sensitive Canadian energy and industrial stocks suffered some of the biggest losses. However, gold producers rallied in an apparent move by investors into safe havens.

Bonds also reacted to the turmoil, as rising prices sent yields lower. The yield on the 10-year U.S. Treasury bond fell to 1.526 per cent late Friday from 1.615 per cent on Thursday. That is below the yield on three-month Treasury bills, a signal that a U.S. recession could be in the works.

U.S. Federal Reserve Chair Jerome Powell said in a speech prior to the turmoil that the central bank would act to sustain the economic expansion, suggesting that the Fed could cut its key interest rate. However, Mr. Powell noted that there is only so much that interest rates can do.

Mr. Trump also said he was ordering shippers including FedEx, Amazon.com Inc., UPS and the U.S. Postal Service to search out and refuse all deliveries of the opioid fentanyl to the United States.

FedEx and UPS said on Friday they already work closely with law enforcement to stop illegal shipments from entering the U.S. Amazon and USPS did not reply to a request for comment.

The U.S. Chamber of Commerce urged “continued, constructive engagement” so that the world’s two largest economies could quickly reach a trade deal.

“Time is of the essence. We do not want to see a further deterioration of US-China relations,” Myron Brilliant, executive vice-president and head of the business group’s international affairs, said in a statement.

On Thursday, top White House economic adviser Larry Kudlow said there was progress in a deputy-level U.S.-China trade call this week. But neither side so far appears to be ready to make a significant compromise needed to end the nearly 14-month-old trade war.

The trade dispute has stoked fears about a global recession, shaking investor confidence and prompting central banks around the world to ease policy in recent months.

In an interview on CNBC, Federal Reserve Bank of Cleveland president Loretta Mester said she viewed the Chinese retaliatory tariffs as “just a continuation” of the aggravated trade policy uncertainty that has begun weighing on U.S. business investment and sentiment.

The knock-on impact of the U.S.-China trade tensions was a key reason behind the U.S. Federal Reserve’s move to cut interest rates last month for the first time in more than a decade.

“The President’s trade war threatens to push the economy into a ditch,” said Mark Zandi, chief economist at Moody’s Analytics. “The President is hoping that the Federal Reserve will ... bail him out, but if he continues to pursue the war, the Fed won’t be up to the task.”

Although the Trump administration has rolled out aid to farmers stung by China’s tariffs, there is growing frustration in America’s agricultural belt, a key political constituency for Trump as he heads into his 2020 re-election campaign.

“The view from much of farm country is bleak and anger is boiling over. With bankruptcies and delinquencies rising and prices falling, the frustration with the lack of progress toward a deal is growing,” the bipartisan Farmers for Free Trade group said in a statement.

Ford, a net exporter to China, said in a statement it encouraged the United States and China to find a near-term solution.

“It is essential for these two important economies to work together to advance balanced and fair trade,” the company said.

with a file from David Berman 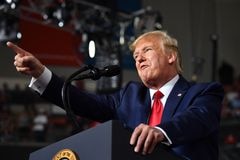 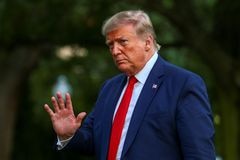 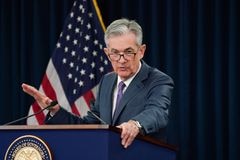