U.S. job openings increased further in July, although more workers quit their jobs in the retail as well as professional and business services industries likely because of fears of exposure to COVID-19 and problems with child care.

Despite the surge in vacancies reported by the Labour Department on Wednesday in its monthly Job Openings and Labor Turnover Survey, or JOLTS, the number of unemployed people competing for a new job remained relatively high in July.

“The labour market recovery will be measured in years, not months,” said Chris Rupkey, chief economist at MUFG in New York.

Job openings, a measure of labour demand, jumped 617,000 to 6.6 million on the last day of July. Still, vacancies remain below their level of seven million in February.

Job openings were led by the retail sector, with 172,000 new vacancies. There were an additional 146,000 jobs in health care and social assistance. In the construction industry, job openings increased by 90,000. The job openings rate shot up to 4.5 per cent, the highest since October, 2019, from 4.2 per cent in June.

The number of people voluntarily quitting their jobs increased 344,000 to 2.9 million. There were 152,000 workers who quit their jobs in the retail sector. In the professional and business services sector, 98,000 workers left. State and local government education reported 35,000 workers quit in July.

While schools have opened for the new academic year, many are conducting virtual classes. Problems securing child care have forced some workers, mostly women, to resign from their jobs. The labour participation rate for women dropped in April to levels most recently seen in the late 1980s and has not rebounded much since.

The quits rate, which under normal circumstance is viewed by policy makers and economists as a measure of job market confidence, increased to 2.1 per cent in July from 1.9 per cent in June.

“More quits during the pandemic are probably a reflection of virus fear and challenges related to child care given the current weak state of the labour market,” said Lydia Boussour, a senior U.S. economist at Oxford Economics in New York.

The JOLTS report followed on the heels of news last Friday that the economy created 1.371 million jobs in August after adding 1.734 million in July. About 10.6 million of the 22.2 million jobs lost at the depth of the coronavirus pandemic have been recovered.

In July, there were 2.5 people for every job opening.

The JOLTS report showed hiring dropped by 1.183 million jobs to 5.8 million in July. Hiring decreased by 599,000 jobs in the accommodation and food services sector. It fell by 137,000 in the health care and social assistance industry.

But federal government hiring increased by 33,000, largely because of recruitment for the 2020 Census.

Layoffs abated in July, declining 274,000 to 1.7 million, the lowest since March, 2019. There were decreases in manufacturing, transportation, warehousing, utilities and wholesale trade industries.

Although layoffs as measured by the number of new claims for unemployment benefits remain elevated, economists believe the worst of the job cuts related to the pandemic is likely over.

“It remains difficult to understand why various measures related to layoffs have sent different signals in recent months, but several of the key measures suggest that we have moved past the worst of the layoffs associated with the virus spread,” said Daniel Silver, an economist at JPMorgan in New York. 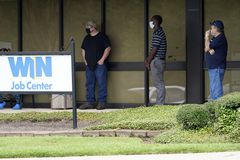