U.S. manufacturing activity eased off an 11-year low in May, the strongest sign yet that the worst of the economic downturn was behind as businesses reopen, though the recovery from the COVID-19 crisis could take years because of high unemployment.

The promising signs of stabilization in manufacturing reported by the Institute for Supply Management on Monday are a welcome respite as the country braces for data on Friday expected to show the worst unemployment rate since the Second World War. Rampant joblessness will lead to tepid demand and economic growth.

“Today’s report on the manufacturing sector represents good news that hints the economy is turning the corner as the states reopened in May,” said Chris Rupkey, chief economist at MUFG in New York. “It will not be a quick recovery for sure, but at least the worst is over.”

The ISM said its index of national factory activity rose to a reading of 43.1 last month from 41.5 in April, which was the lowest level since April 2009. A reading below 50 indicates contraction in manufacturing, which accounts for 11 per cent of the U.S. economy. May marked the third straight monthly contraction.

Still, the first increase in the ISM index since January mirrored improvements in regional manufacturing surveys in May and suggested April was the nadir for economic activity. A survey on Monday from data firm IHS Markit also showed stabilization in manufacturing conditions in May.

The ISM also viewed May as the “transition month,” but cautioned that “demand remains uncertain.”

The improvement was not uniform. Disruptions to the supply chain and social distancing are limiting transportation equipment manufacturers’ ability to restart production. Food, beverage and tobacco industries were overwhelmed, nothing that increased demand “stressed our production capabilities.”

The ISM’s forward-looking new orders sub-index rose to a reading of 31.8 in May from 27.1 in April, which was the lowest since December 2008. Despite the slight improvement last month, new orders at current levels suggest business investment could continue to shrink. The COVID-19 crisis has undercut corporate profits, which declined in the first quarter at rates last seen during the 2007-09 Great Recession. Business investment has contracted for four straight quarters.

Stocks on Wall Street were higher, though caution reigned amid country-wide protests over race relations and a flare-up in tensions between Washington and Beijing. The dollar fell against a basket of currencies. U.S. Treasury prices slipped.

The economy contracted at a 5 per cent annualized rate in the first quarter, the worst performance since the 2007-09 recession. Gross domestic product is expected to decline at a rate as sharp as 40 per cent in the second quarter, which would be the biggest contraction in output since the Great Depression of the 1930s.

The ISM’s measure of factory employment advanced to a reading of 32.1 in May after plunging to 27.5 in the prior month, which was the lowest since February 1949.

About 21.4 million jobs were lost in March and April. The Labor Department is expected to report on Friday that at least another 8 million were lost in May, with the unemployment rate rocketing to 19.7 per cent, according to a Reuters survey of economists. That would be the highest since the government started tracking the series in 1948, and up from 14.7 per cent in April.

“Manufacturers are being squeezed by both a collapse in demand and disrupted supply chains,” said James Knightley, chief international economist at ING in New York. “With profitability under immense pressure firms are increasingly looking to cut costs, which will limit the ability of the U.S. economy to rebound quickly.”

A separate report from the Commerce Department on Monday showed construction spending dropped 2.9 per cent in April, the largest decrease since October 2018, after being unchanged in March.

Economists had forecast construction spending declining 6.5 per cent in April. The construction sector has fared better than other segments of the economy as some large projects were likely put in place months before the COVID-19 pandemic.

In addition, many states regarded the industry as essential business, when restaurants and other social gathering venues were shuttered in mid-March to slow the spread of COVID-19.

“Construction spending can be a somewhat lagging indicator, as outlays each month in part reflect projects started in prior months,” said Nancy Vanden Houten, a senior U.S. economist at Oxford Economics in New York. 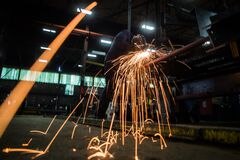 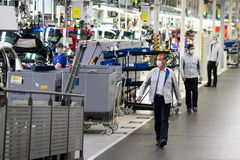