U.S. retail sales accelerated in September, rounding out a strong quarter of economic activity, but the recovery from the COVID-19 recession is at a crossroads as government money runs out and companies continue to layoff workers.

New coronavirus cases are also surging across the country, which could lead to restrictions on businesses like restaurants, gyms and bars, and undercut consumer spending. The economy is already shifting into lower gear. Other data on Friday showed an unexpected drop in output at factories last month.

“Although sales growth is strong, it will slow through the rest of this year and into next year,” said Gus Faucher, chief economist at PNC Financial in Pittsburgh, Pennsylvania. “The slowing will be even larger if Congress does not pass another stimulus bill. Unemployment remains pervasive throughout the U.S. economy.”

Retail sales jumped 1.9 per cent last month as consumers bought motor vehicles and clothing, dined out and splashed out on hobbies. That followed an unrevised 0.6 per cent increase in August.

Economists polled by Reuters had forecast retail sales would rise 0.7 per cent in September. Some said September’s surge was likely exaggerated by difficulties stripping seasonal fluctuations from the data after the shock caused by COVID-19. Unadjusted retail sales fell 2.8 per cent after dropping 1.0 per cent in August.

Retail sales have bounced back above their February level, with the pandemic boosting demand for goods that complement life at home, including furniture and electronics. An aversion to public transportation has boosted motor vehicle purchases. Retail sales rose 5.4 per cent on a year-on-year basis in September.

They account for the goods component of consumer spending, with services such as healthcare, education, travel and hotel accommodation making up the other portion.

These so-called core retail sales correspond most closely with the consumer spending component of gross domestic product. They were previously estimated to have dipped 0.1 per cent in August.

Economists have attributed the strength in retail sales to fiscal stimulus, especially a weekly subsidy paid to tens of millions of unemployed Americans. September’s robust sales reinforced expectations for record consumer spending and economic growth in the third quarter.

Growth estimates for the July-September quarter are as high as a 35.2 per cent annualized rate. That would recoup roughly two-thirds of the output lost because of COVID-19. The economy contracted at a 31.4 per cent pace in the second quarter, the deepest decline since the government started keeping records in 1947.

U.S. stocks bounced from three straight days of losses on the retail sales data and Pfizer’s announcement that it could apply for emergency use of its COVID-19 vaccine candidate as early as November.

“Some of the gain may have reflected increased demand from back to school sales, but with most schools remote learning the reported strength seems dramatic and likely unsustainable,” said Kevin Cummins, chief U.S. economist at NatWest Markets in Stamford, Connecticut.

Even with September’s gains, sales at bars, restaurants and clothing stores remain well below their pre-pandemic levels.

“It’s further evidence of how many top earners have managed to dodge the pandemic by working from home, while most lower- paid workers have been forced to choose between jobs putting them at risk, when they can find them, and unemployment,” said Chris Low, chief economist at FHN Financial in New York.

The White House and Congress are struggling to reach a deal on another rescue package for businesses and the unemployed. The government reported on Thursday that new claims for unemployment benefits increased to a two-month high last week.

Last month’s jump in retail sales set consumer spending on a higher growth path heading into the fourth quarter, which will likely ensure that the economy continues to expand, though at a moderate pace. Growth estimates for the fourth quarter have been slashed to as low as a 3 per cent rate from above a 10 per cent pace.

Some economists believe that historic savings could cushion consumer spending in the absence of more financial aid from the government. Others, however, caution that rising COVID-19 infections and job losses could encourage some consumers to hunker down and conserve savings.

A survey from the University of Michigan on Friday showed consumer sentiment edging up in early October.

Consumers, however, worried about current economic conditions because of “slowing employment growth, the resurgence in COVID-19 infections and the absence of additional federal relief payments.”

They were less enthusiastic about buying household appliances. The share who believed it was a good time to buy a car was the lowest in nine years. 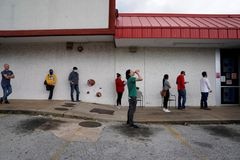 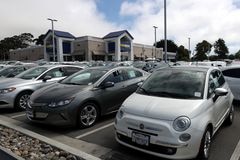 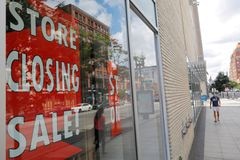