The number of Americans filing applications for unemployment benefits increased more than expected last week, suggesting the labour market was slowing, but probably not to the extent implied by a near-stall in job growth in February.

While other data on Thursday showed import prices rising in February by the most in nine months, the trend in imported inflation remained weak. Import prices dropped on a year-on-year basis for a third straight month in February.

News on the housing market remained downbeat, with new home sales falling more than expected in January. The stream of data remains broadly supportive of the Federal Reserve’s pledge to be “patient” before raising interest rates further this year.

“If the Fed is reading the tea leaves the economic brew of data are distinctly on the weak side today, and will keep Fed policy cemented in place at next week’s meeting,” said Chris Rupkey, chief economist at MUFG in New York.

Initial claims for state unemployment benefits rose 6,000 to a seasonally adjusted 229,000 for the week ended March 9, the Labour Department said. Economists polled by Reuters had forecast claims rising to 225,000 in the latest week.

Claims have been hovering in the middle of their 200,000-253,000 range this year. The labour market is slowing as workers become more scarce.

Hiring is also being constrained by a weakening economy as stimulus from a US$1.5-trillion tax cut diminishes. Washington’s trade war with Beijing, slowing demand overseas and uncertainty over Britain’s exit from the European Union are also hurting economic activity.

The government reported last week that non-farm payrolls increased by only 20,000 jobs in February, the weakest since September, 2017, in part as payback after hefty gains in the prior two months. But the unemployment rate dropped two-tenths of a percentage point to 3.8 per cent and annual wage growth was the strongest since 2009.

Cold weather and a five-week partial shutdown of the government that ended on Jan. 25 probably weighed on sales, economists said.

Still, affordability remains a challenge, especially at the lower end of the market, even as mortgage rates have dropped to 13-month lows and house price inflation has slowed.

Expensive lumber as well as land and labour shortages are constraining builders from increasing construction of homes in this market segment. There are concerns that lower house prices could encourage builders to cut back on new projects. The median new home price fell 3.8 per cent in January from a year ago.

“Given the rising cost pressures builders are facing, this could suggest continued difficulty for new homes and new construction ahead,” said Danielle Hale, chief economist at realtor.com.

The dollar rose against a basket of currencies, while U.S. Treasury prices fell. Stocks on Wall Street were higher.

In a third report on Thursday, the Labour Department said import prices rose 0.6 per cent last month, boosted by increases in the costs of fuels and consumer goods. That was the biggest gain since May and followed a 0.1-per-cent rise in January.

Economists polled by Reuters had forecast import prices rising 0.3 per cent in February.

In the 12 months through February, import prices fell 1.3 per cent. That followed a 1.6-per-cent decline in January.

The report came on the heels of data showing tame producer and consumer inflation readings in February. The jump in the monthly import prices did not change economists’ views that inflation will remain moderate through the first half of 2019.

“A deflationary impulse from abroad is putting slight downward pressure on domestic prices at the start of 2019,” said Jake McRobie, a U.S. economist at Oxford Economics in New York.

But food prices fell 0.8 per cent in February after decreasing 0.4 per cent in the prior month. Excluding fuels and food, import prices rebounded 0.2 per cent last month after falling 0.3 per cent in January.

The cost of goods imported from China was unchanged in February after dropping 0.3 per cent in the prior month. Prices of Chinese imports dropped 0.7 per cent in the 12 months through February, the biggest decline since October, 2017. 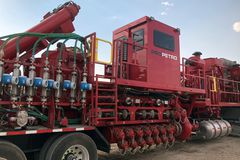 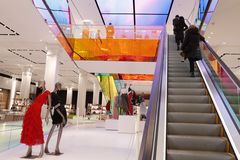