U.S. producer prices were unexpectedly unchanged in November as increases in food and gasoline prices were offset by declining costs for services, pointing to muted inflation despite a recent uptick in consumer prices.

Other data on Thursday showed the number of Americans filing for unemployment benefits surged to more than a two-year high last week. The jump in jobless claims, however, likely does not signal a pickup in layoffs as the data tends to be volatile in the period following the Thanksgiving Day holiday.

The reports were released a day after the Federal Reserve’s decision to keep interest rates steady. The U.S. central bank indicated on Wednesday that borrowing costs were likely to remain unchanged at least through next year amid expectations the economy would continue to grow modestly and the unemployment rate remain low.

“Inflationary pressures are not an issue,” said Ryan Sweet, a senior economist at Moody’s Analytics in West Chester, Pennsylvania. “This supports the Fed’s strong signal that if its expectations hold, monetary easing will not continue in 2020 and rate hikes are even more unlikely.”

The Labor Department said the flat reading in its producer price index for final demand last month followed a 0.4 per cent rebound in October. The PPI gained 1.1 per cent in the 12 months through November, matching October’s rise, which was the smallest increase since October 2016.

Economists polled by Reuters had forecast the PPI would rise 0.2 per cent in November and accelerate 1.2 per cent on a year-on-year basis.

Excluding the volatile food, energy and trade services components, producer prices were also unchanged last month after edging up 0.1 per cent in October. The so-called core PPI increased 1.3 per cent in the 12 months through November, the smallest gain since September 2016, after advancing 1.5 per cent in October.

The dollar ticked up against a basket of currencies, while prices of U.S. Treasuries fell. Stocks on Wall Street were trading higher, buoyed by President Donald Trump’s tweet that the United States was getting very close to a “big deal” with China.

The soft PPI data followed a report on Wednesday showing solid gains in consumer prices in November. The Fed, which has a 2 per cent annual inflation target, tracks the core personal consumption expenditures (PCE) price index for monetary policy.

The core PCE price index rose 1.6 per cent on a year-on-year basis in October and has fallen short of the target this year. November PCE price data will be published next week.

In another report on Thursday, the Labor Department said initial claims for state unemployment benefits surged 49,000 to a seasonally adjusted 252,000 for the week ended Dec. 7, the highest reading since September 2017. The increase was the largest since August 2017.

Claims dropped to 203,000 in the prior week, which was a seven-month low. The decline probably reflected a late Thanksgiving Day this year compared to 2018, which could have thrown off the model used by the government to strip out seasonal fluctuations from the data.

“The recent volatility in the claims data is likely due to seasonal adjustment issues that we often see around the holiday season, and we saw a similar pattern across the weekly claims readings around Thanksgiving in 2013 when the holiday fell on November 28 like it did this year,” said Daniel Silver, an economist at JPMorgan in New York.

Economists had forecast claims would increase to 213,000 in the latest week. The four-week moving average of initial claims, considered a better measure of labor market trends as it irons out week-to-week volatility, rose 6,250 to 224,000 last week.

The underlying trend in claims remains consistent with a strong labor market. The government reported last Friday that the economy added a robust 266,000 jobs in November and the unemployment rate fell back to 3.5 per cent, its lowest level in nearly half a century. Other data on housing, trade and manufacturing have also been relatively upbeat and suggested the economy was growing at a moderate speed rather than stalling.

“We judge the momentum in the labor market to be solid,” said John Ryding, chief economist at RDQ Economics in New York.

In November, wholesale energy prices increased 0.6 per cent after rebounding 2.8 per cent in October. They were supported by a 2.3 per cent rise in gasoline prices, which followed a 7.3 per cent surge in October.

There is still no sign that U.S. tariffs on Chinese imports are boosting inflation. Economists say importers and businesses were probably absorbing the duties to keep market share.

The cost of services fell 0.3 per cent last month, the biggest drop since February 2017, reversing October’s 0.3 per cent gain. Trade services, which measure changes in margins received by wholesalers and retailers, declined 0.6 per cent, accounting for over two-thirds of the decrease in prices for services last month. 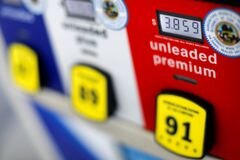 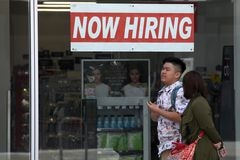 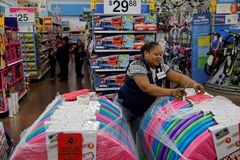