The number of Americans filing new claims for unemployment benefits fell only slightly last week, adding to signs that the economic recovery was losing steam as the COVID-19 pandemic intensifies and fiscal stimulus ends.

The economy could be plunged into a period of uncertainty following Tuesday’s presidential election, potentially undermining business investment and delaying a much-needed second coronavirus relief package from the government.

Democrat Joe Biden edged closer to victory on Thursday, while President Donald Trump alleged fraud without providing evidence, filing lawsuits and calling for recounts in a race yet to be decided two days after polls closed.

“It looks like a second wave of layoffs is hitting the economy perhaps due to the rising count of virus cases, but it could also mean that many businesses are unable to reopen fully and facing bankruptcy, so they have to let their workers go,” said Chris Rupkey, chief economist at MUFG in New York.

Initial claims for state unemployment benefits fell 7,000 to a seasonally adjusted 751,000 for the week ended Oct. 31, the Labor Department said. Data for the prior week was revised to show 7,000 more applications received than previously reported.

Economists polled by Reuters had forecast 732,000 applications in the latest week. Claims remain above their 665,000 peak during the 2007-09 Great Recession, though they have dropped from a record 6.867 million in March.

The weekly unemployment claims report, the most timely data on the economy’s health, followed on the heels of reports on Wednesday showing private payrolls increasing less than expected in October and activity in the services industry cooling.

With a swift fiscal package unlikely as politics take center-stage, the focus will shift to the Federal Reserve to pump more money into the economy. The U.S. central bank maintained its ultra easy monetary policy stance on Thursday and pledged again to do whatever it can in coming months to sustain the recovery.

Unadjusted claims edged down 543 to 738,166 last week. Economists prefer the unadjusted number given earlier difficulties adjusting the claims data for seasonal fluctuations because of the economic shock caused by the pandemic. Including a government-funded program for the self-employed, gig workers and others who do not qualify for the regular state unemployment programs, 1.1 million people filed claims last week.

Stocks on Wall Street were trading higher as investors bet on a Republican-held Senate that would block any moves by a Biden administration to tighten regulation and raise taxes. The dollar fell against a basket of currencies. U.S. Treasury prices were lower.

More than $3 trillion in government pandemic relief for businesses and workers fueled a historic 33.1 per cent annualized rate of economic growth in the third quarter. That followed a record 31.4 per cent pace of contraction in the April-June quarter.

Lack of fiscal stimulus and spiraling new coronavirus infections across the country have put the economy on a sharply slower growth path heading into the fourth quarter. Restaurants and gyms have moved outdoors, but cooler weather and the explosion of COVID-19 cases could leave many in trouble.

The services industry, which accounts for more than two-thirds of the U.S. economy, has been hardest hit by the pandemic, making it difficult to recoup all the 22.2 million jobs lost during the crisis.

The government’s closely watched employment report on Friday is expected to show nonfarm payrolls increased by 600,000 jobs in October after rising 661,000 in September, according to a Reuters survey of economists. That would leave employment 10.1 million jobs below its peak in February.

Though the claims report showed a decline in the number of people on unemployment rolls in late October, that was partly because many people have exhausted their six months of benefits.

In another report on Thursday, the Labor Department said nonfarm productivity, which measures hourly output per worker, increased at a 4.9 per cent annualized rate last quarter. Productivity surged at a 10.6 per cent rate in the second quarter, the fastest since the first quarter of 1971. It rose at a 4.1 per cent rate compared to the third quarter of 2019.

Though productivity was likely distorted by the pandemic, the two straight quarters of strong gains mirror a pattern seen during the 2007-09 recession when the recovery was not accompanied by strong employment growth.

The economy has recouped two-thirds of output lost during the COVID-19 pandemic, while just over half of the jobs that disappeared have been recovered.

“Though we are on track for GDP next year to recoup all of the drop during the recession, the labor market will take longer,” said Ryan Sweet, a senior economist at Moody’s Analytics in West Chester, Pennsylvania. 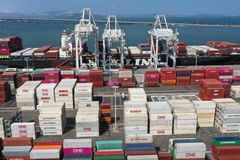 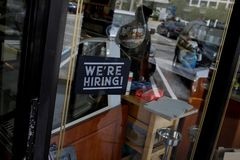 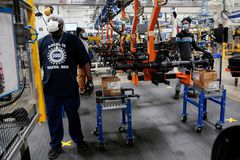