The number of Americans filing new claims for unemployment benefits unexpectedly increased last week, supporting views the economic recovery from the COVID-19 pandemic was running out of steam amid diminishing government funding.

The weekly jobless claims report from the Labor Department on Thursday, the most timely data on the economy’s health, also showed 26 million people were on unemployment benefits in early September. The faltering labor market recovery and a recent rise in new coronavirus infections has piled pressure on Congress and the White House to come up with another rescue package.

Federal Reserve Chair Jerome Powell on Thursday reiterated the need for more fiscal stimulus, telling lawmakers that it could make the difference between continued recovery and a much slower economic slog. New fiscal relief is looking increasingly unlikely before the Nov. 3 presidential election.

“The high level of joblessness shows that the country isn’t out of the woods yet and it won’t be if the pleading of Fed officials for more stimulus isn’t heard by government officials down in Washington,” said Chris Rupkey, chief economist at MUFG in New York. “The economy is running on empty.”

Initial claims for state unemployment benefits rose 4,000 to a seasonally adjusted 870,000 for the week ended Sept. 19. Data for the prior week was revised to show 6,000 more applications received than previously reported. Economists polled by Reuters had forecast 840,000 applications in the latest week.

Unadjusted claims increased 28,527 to 824,542 last week. Economists prefer the unadjusted claims number given earlier difficulties adjusting the claims data for seasonal fluctuations because of the economic shock caused by the coronavirus crisis.

Six months after the pandemic started in the United States, jobless claims remain above their 665,000 peak during the 2007-09 Great Recession, though applications have dropped from a record 6.867 million at the end of March.

While the reopening of businesses in May boosted activity, demand in the vast services sector has remained lackluster, keeping layoffs elevated. Job cuts have also spread to industries such as financial services and technology that were not initially impacted by the mandated business closures in mid-March because of insufficient demand.

A total 630,080 applications were received for the government-funded pandemic unemployment assistance last week.

The PUA is for the self-employed, gig workers and others who do not qualify for the regular state unemployment programs. PUA applications could fall in the coming weeks after California last Saturday suspended the filing of new claims for two weeks to combat fraud.

Stocks on Wall Street were higher. The dollar was lower against a basket of currencies. U.S. Treasury prices rose.

The claims report also showed the number of people receiving benefits after an initial week of aid dropped 167,000 to 12.58 million in the week ending Sept. 12.

Economists believe the so-called continuing claims are declining partly as people exhaust their eligibility for benefits, which are limited to 26 weeks in most states.

The continuing claims data covered the period during which the government surveyed households for September’s unemployment rate. The decline in mid-September implied a further decrease in the jobless rate from 8.4 per cent in August.

“Only faster progress against the virus itself will assuage the unemployment struggles of so many workers in fields like entertainment who can’t return to their jobs until social distancing restrictions are relaxed ,” said Andrew Stettner, senior fellow at The Century Foundation in New York.

The Fed has cut interest rates to near zero and vowed to keep borrowing costs low for a while, and has also been pumping money into the economy. Government money to help businesses has virtually dried up. Tens of thousands of airline workers are facing layoffs or furloughs next month.

A $600 weekly unemployment benefits supplement ended in July and was replaced with a $300 weekly subsidy, whose funding is already running out.

The ebbing fiscal stimulus is already restraining the economy after activity rebounded sharply over the summer. Gross domestic product is expected to rebound at as much as a record 35 per cent annualized rate in the third quarter after tumbling at a 31.7 per cent rate in the April-June period, the worst performance since the government started keeping records in 1947.

But retail sales and production at factories moderated in August. Business activity cooled in September, reports have shown. Goldman Sachs on Wednesday cut its fourth-quarter GDP growth estimate to a 3 per cent rate from a 6 per cent pace, citing “lack of further fiscal support.”

Despite the economy’s fading fortunes, the housing market continues to shine, with new home sales near a 14-year high in August. 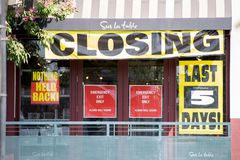 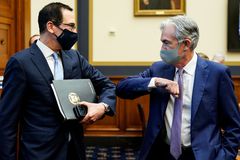 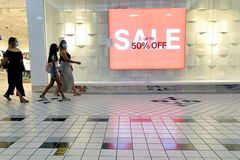