Economists and investors who are trying to get a fix on what the Federal Reserve may do in the months ahead have zeroed in on a single phrase in the statement it has issued after its most recent policy meetings.

The phrase seems innocuous enough. The Fed’s policy makers, it states, “will act as appropriate to sustain the expansion.”

The question is, will the Fed keep or drop that phrase in the statement it will issue when its latest meeting ends Wednesday? Dropping it would be seen as a hint that the rate cut the Fed is set to announce this week – its third this year – will be the last one it expects to make for 2019.

Chairman Jerome Powell has said that the central bank’s rate reductions are intended as a kind of insurance against threats to the economy, notably from U.S. President Donald Trump’s trade war with China and from a broader global slowdown. Mr. Powell has pointed to similar rate cuts in 1995 and 1998 as precedents; in both cases, the Fed cut rates three times.

The key issue at this week’s meeting will be whether the Fed has taken out enough insurance. Mr. Powell and other Fed officials credit their rate cuts with lowering mortgage rates, lifting home sales and generally keeping the economy on track.

Hopes have also been lifted by a truce in the U.S.-China trade fight, and the unemployment rate has reached a 50-year low, suggesting that perhaps further rate reductions aren’t necessary. On the other hand, there is some evidence that the economy is weakening: Retail sales and business investment in heavy equipment both fell last month, for example. The U.S. manufacturing sector by some measures is already in a recession.

The Fed’s phrase that it “will act as appropriate to sustain the expansion” first appeared in the statement it issued after its June meeting. The next month, it cut its benchmark short-term rate for the first time in a decade. The policy makers then cut rates again in September and retained the phrase in their postmeeting statement.

Economists at Goldman Sachs have said they think the phrase will be erased from the Fed’s statement Wednesday to suggest that officials are prepared to suspend their rate cuts at least until the economy shows unmistakable signs of weakness.

“Even the leadership does not appear to view a fourth cut in December as the default outcome,” Spencer Hill, an economist at Goldman Sachs, wrote in a note to clients.

Other analysts take a different view. They think the Fed will continue to say that it “will act as appropriate” to support the expansion. This would allow Mr. Powell and the other officials the flexibility to cut rates again in December if the economy should appear to worsen.

“We anticipate that Fed officials would rather wait and see more incoming data ahead of the [December] meeting before judging whether a pause was appropriate or not,” Kathy Bostjancic, chief U.S. financial economist at Oxford Economics, wrote in a research note.

Ms. Bostjancic also noted that the financial markets aren’t pricing in a cut in December. As a result, there is little need for Fed officials to steer investors in a different direction.

She and some other economists say they think the Fed will try to avoid what analysts refer to as a “hawkish cut.” This occurs when it cuts short-term rates to try to spur borrowing and spending, but make it so clear that no further reductions are likely that market-driven rates, such as those on mortgages, drift up, thereby diluting the benefit of the Fed’s cut.

Narayana Kocherlakota, a former president of the Federal Reserve Bank of Minneapolis and now an economics professor at the University of Rochester, said he thinks the Fed will want to keep its options open. Although the economy appears mostly healthy, inflation remains below the Fed’s 2-per-cent target and Americans increasingly expect inflation to stay unusually low. Further cuts could help lift inflation toward the Fed’s target, Mr. Kocherlakota argues.

“I suspect we won’t know much about what they’ll do in December,” he said. “They’re going to be very balanced in their communication.”

Although the statement may not change much, Mr. Powell could provide a hint of the Fed’s next steps in his news conference. He may, for example, want to indicate that the Fed still has a “downward bias,” meaning that any change in rates in the near future will more likely be a cut than a hike.

The economic picture has been mixed since the last time the Fed met in mid-September. Americans cut back on spending at retailers and restaurants last month, a worrisome sign because consumer spending is the leading source of economic growth. Still, consumer confidence remains high, and shoppers could easily rebound in the coming months.

Businesses have reduced their spending on industrial machinery and other equipment, mostly because the U.S.-China trade war has made them reluctant to commit to big purchases. The tit-for-tat tariffs between the United States and China, the world’s two largest economies, have also reduced U.S. exports.

On Wednesday, the government will issue its first estimate of how the economy fared in the July-September quarter, and most economists forecast it will be relatively weak. The Federal Reserve Bank of Atlanta projects that the economy expanded at just a 1.7-per-cent annual rate in the July-September quarter, which would be the second-slowest quarterly growth in nearly four years. 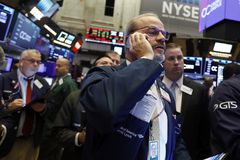 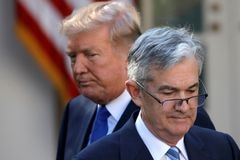