Three condominium projects started by Toronto builder Cresford Developments have been pushed into receivership amid allegations of financial mismanagement, raising the possibility that as many as 1,800 presale buyers will see their contracts cancelled or their apartments go unbuilt.

Cresford is one of Toronto’s major luxury condo developers and three of its four active development properties – prime downtown sites with projected valuations in the billions of dollars – are now in receivership.

“Most of us in the industry have seen this percolate for a few months, so we’re not surprised,” said Pauline Lierman, director of market research at condo market analysts Urbanation Inc.

Former Cresford Group executive Maria Athanasoulis filed a 33-page wrongful dismissal complaint on Jan. 21 that alleged the company was in a “cash crisis,” and was failing to pay contractors and incurring costly delays on its projects.

On March 27, the Ontario Superior Court of Justice appointed receivers for three projects managed by the Cresford Group, whose parent company Oakleaf Consulting Ltd. is controlled by Daniel Casey and his family. The court named PricewaterhouseCoopers Inc. as the receiver for 33 Yorkville Residences Inc. at the behest of construction lenders BCIMC Construction Fund Corp. and Otéra Capital Inc.

In a separate filing, PWC was also appointed receiver for The Clover on Yonge Inc. and 480 Yonge St. Inc., which is branded as Halo.

Construction loans are parcelled out over time and come with covenants that allow for third-party consultants to ensure the projects’ budgets are on track before new funds are released.

BCIMC is owed more than $320-million on the three projects. Its $3.6-billion construction mortgage portfolio is managed by QuadReal Finance LP. An affidavit from Dean Atkins, QuadReal executive vice-president and head of mortgage investments, in the 33 Yorkville filing provides a vivid narrative of the lender’s concerns.

Mr. Atkins’s affidavit claims QuadReal appointed PWC to do a review of 33 Yorkville’s budget, which found evidence of “inappropriate project contracting and accounting" and alleged attempts to hide cost overruns through the creation of two project ledgers. Construction subcontractors were allegedly told to divide their awarded contract into two parts: one that would be consistent with the lender-approved budget and a second invoice for the excess. Ledger “001” was sent to the project’s cost consultant Altus Group Ltd. Ledger “002,” with about $3-million in cost overruns, was allegedly hidden until PWC uncovered it.

Another way Cresford is alleged to have played down cost overruns was to offer contractors steep discounts on presale units as payment-in-kind for keeping overages off invoices. One alleged example Mr. Atkins describes saw a contractor agree to not bill a $500,000 overrun to 33 Yorkville’s budget, in return Cresford gave the contractor a $776,000 discount on a condominium unit.

The lenders now view the project as being in default of its obligations.

David Mann, chief financial officer of Cresford, in a responding affidavit expressed surprise at the speed of the push to receivership and claimed the coronavirus pandemic was responsible for some of the project delays, as some of the subcontractors at 33 Yorkville have suspended construction work. Mr. Mann said Cresford has a letter of intent from “an entity backed by a renowned Canadian entrepreneur” to buy the Yorkville site, enabling Cresford to repay its debts. Mr. Mann also described efforts to sell a number of Cresford-owned condo townhouses to raise about $10-million.

“We tried to put forth a restructuring for Halo and Clover that we thought was in the best interest of a whole panoply of stakeholders,” said Steven Graff, a partner with Aird & Berlis who is acting as Cresford’s counsel. “We were targeting to have something far more concrete in terms of the plan within three to six weeks.”

As for the allegations contained in the affidavits, “That is something that will be the subject of ongoing litigation,” Mr. Graff said.

“As a broker who sold units in some of these projects and also as a purchaser of a unit at 33 Yorkville, my concern (and that of everyone I know who has sold at this project or is an investor or both) is [whether] Cresford is going to be able to work out their situation,” said Rahim Suleman, a broker with HomeLife/Yorkland Real Estate Ltd., in an e-mail.

“Halo and 33 Yorkville are more than likely to be cancelled completely,” as they have not yet begun substantial construction, said Ms. Lierman, who tracks progress on dozens of condo projects in the Greater Toronto Area. Clover, which owes $145.9-million to QuadReal, is nearly completed.

Ms. Lierman said that of Cresford’s four active sites, three are currently just excavations, and only one of those is not in receivership. “Three pits on or near Yonge Street in downtown Toronto that are going to be stagnant for whatever stage … that doesn’t look great for the industry.” 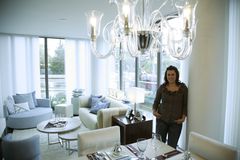