Barrick Gold Corp. is sniffing around for its next acquisition, but chief executive officer Mark Bristow says the big Canadian miner won’t be rushed into doing anything rash.

Unlike the ruinous round of consolidation that swept across the industry from 2008 to 2012, the current round has gone well. Takeover premiums have been low or non-existent, promised cost savings have largely been borne out and the share prices of the acquirers have gone up.

Mr. Bristow says gold-sector consolidation isn’t over by a long shot, and Barrick, with its minimal debt load and cash-rich coffers, is “well equipped” to play a role.

“We are very busy at the moment looking at stuff,” he said. “Emerging new regional” producers and single-asset miners are the most attractive targets, he added.

In a conference call with analysts, Mr. Bristow stressed his preference for mines that produce at least 250,000 ounces of gold a year, with a life of at least 10 years. But he also told the group not to expect a deal imminently, because transactions can sometimes take years to come together.

“We’ve got too many checks and balances in my executive team to go out there and do something stupid,” he said. “So watch this space, give us time.”

In the immediate future, Barrick intends to pay out some of its cash directly to shareholders, as opposed to spending it on acquisitions. Barrick plans to pay US$750-million in a trio of special dividend payouts of 12 US cents a share in May, August and November. They will be in addition to the company’s regular quarterly dividend of 9 US cents a share.

Barrick made its special dividend announcement alongside the release of its fourth-quarter financial results. The firm reported a net profit of US$685-million for the period and, on an adjusted basis, earnings of 35 US cents a share – 4 US cents better than analysts expected.

“The slight beat against our model was due mainly to lower taxes,” Fahad Tariq, analyst with Credit Suisse, wrote in a note to clients.

After hitting a record high of US$2,050 an ounce in August, gold has lately fallen below US$1,800, mainly because the worst of the financial dislocation caused by the COVID-19 pandemic has abated. The precious metal tends to perform best when uncertainty is at its highest.

Recently, copper has been the star performer among metals, and just this week, the industrial metal reached its highest level since 2012. Copper has been powered in large part by billions in government stimulus that has jump-started many economies out of the COVID-19 deep freeze. Barrick has minor exposure to copper through mines in Zambia, Chile and Saudi Arabia.

The world’s second-biggest gold company by market value expects to produce between 4.4 million and 4.7 million ounces of bullion this year, which would be down slightly compared with 2020.

Left out of this year’s forecast entirely is its Porgera mine in Papua New Guinea (PNG). Ten months ago, Barrick suspended production there after the PNG government refused to renew its mining lease over allegations of environmental infractions. Late last year, Barrick reached a provisional pact to patch up the disagreement that would see it grant a larger proportion of the future profits to the PNG government.

But on Thursday, Mr. Bristow said a significant amount of work still needs to be done to finalize the agreement, including appeasing landowners, its Chinese fellow shareholder – Zijin Mining Group – and a new PNG prime minister with a populist nationalist agenda.

“It’s a bit like Tanzania was, and that took three years to resolve,” Mr. Bristow said, referring to an earlier geopolitical dispute.

“I imagine we’ll get there sooner than that.” 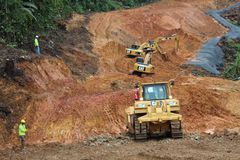 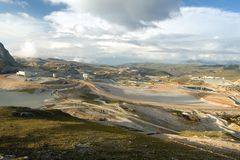 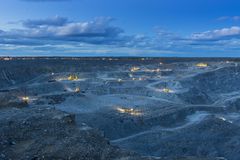