Bill C-69 passed third reading in the House of Commons in June, and will now be subject to review in the Senate.

It could be a rocky ride.

The regulatory process for energy and other major infrastructure projects is already long and expensive. Thanks to the federal government’s denial of the Northern Gateway project despite regulatory approvals (subject to conditions), the cancellation of the Energy East project due, in part, to moving regulatory goalposts and the challenges that the Trans Mountain Expansion project continues to face, it is also increasingly seen as subject to political whim.

But while the bill’s intention is good – protecting the environment while still benefiting from our Canadian energy and other resources – it is deeply flawed. It tries to do too much, and leaves uncertainty about how it will be applied. Moreover, there remain too many opportunities for arbitrary political discretion. Particularly troubling is the complete discretion on the part of Cabinet -- even just the Minister of the Environment -- to approve or deny any major project, regardless of what the regulator might recommend at the end of what could be a very long and costly review process.

Even some environmental activist groups are concerned, recognizing that politically influenced decisions can change depending on the government of the day.

Because Bill C-69 has the potential to create even more uncertainty around the fate of Canadian energy and other major projects, impose greater timelines and significantly increase the role of political influence, there is increasing consensus among business leaders, investors, potential investors, think tanks, academics and others that the bill is not only problematic, it may not be fixable.

Since the bill was first proposed, Canada’s economic prosperity has come under fire. Factors beyond our control – the threatened loss of NAFTA, major U.S. tax cuts and streamlining of regulations, all now compounded by major U.S. tariffs being imposed on Canadian products – pose serious threats to our economy. Here at home, our investment climate for major resource-related projects has already deteriorated -- Bill C-69, despite good intentions, would make things worse.

We have so much of what the world wants. Canada’s natural resources have been the backbone of Canada’s economic prosperity – energy of all kinds, forest products, agri-food, fertilizers, minerals – but we are struggling to get it to market in a timely way or at all. The most recent high-profile examples are pipelines, but critical port expansions, “clean” electricity transmission lines, wind farms, transportation capacity and natural gas plants are also being delayed or outright denied. Both Canadian and foreign investors are going elsewhere, citing Canada’s already cumbersome regulatory environment, decreasing competitiveness and – despite Canada’s historic reputation as a safe, reliable country that is attractive for investment – our political uncertainty.

The Canada West Foundation’s major report on Bill C-69, Unstuck: Recommendations for reforming Canada’s regulatory process for energy projects, provides detailed analysis and recommendations for what new legislation should include. Unfortunately, the amendments made at the House of Commons Committee level not only fail to address the report’s major concerns, but in some cases exacerbate them.

Now is not the time to pass legislation that could make our investment climate even worse. Most stakeholders, including many businesses, investors and potential investors, are not concerned about tough environmental regulations; what they need for investment is certainty.

The cart has also been put before the horse. C-69 was drafted before the work of the government’s own Economic Strategy Tables. In particular, the Resources of the Future Economic Table is doing excellent, non-partisan work on practical recommendations for how Canada can capitalize on our resource wealth while ensuring environmental sustainability. This work is directly related to the stated purposes of Bill C-69. The government deserves credit for establishing this effort, but none of the work is reflected in the bill – and it is far poorer for it.

Finally, it is inappropriate to expect the (unelected) Senators to do the work that should have been done by (elected) members of Parliament. The mandate of those in the House of Commons is to consider legislation that provides for Canada’s overall economic and social prosperity. When proposed legislation is this significant and far-reaching, it requires review for far more than environmental sustainability – important as that is. MPs must thoroughly consider its economic impacts as well. Yet, the Environment and Sustainable Development Committee was the only House of Commons Committee to review the bill – not Natural Resources (its members were “invited to participate” in the Committee deliberations, but there was little active engagement); not Transport, Infrastructure and Communities; not International Trade; not Finance. This, despite the fact that Bill C-69 would have significant consequences for all of these other committees.

The Senate could vote the bill down, or delay its proceedings until next spring, when Parliament rises for the fall election. The Senate could also call for a conference with the House of Commons, and agree together not to proceed with the bill as is. However, our preference by far would be that the government recognize that, due to forces beyond its control, it needs a new mandate to focus on economic issues, with a new Throne Speech in the fall. A side benefit would be the opportunity for the government to reboot C-69 in the new session with a better bill.

Canada has no immediate plans to increase target for cutting emissions: McKenna
June 21, 2018 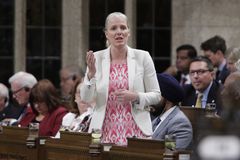 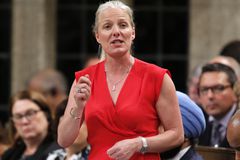 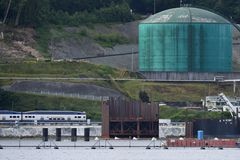