Niall McGeeMining reporter
Published May 18, 2021 Updated May 18, 2021
For Subscribers
Comments
Text Size
Please log in to listen to this story. Also available in French and Mandarin. Log In Create Free Account

Centerra Gold Inc. is trying to stop the Kyrgyzstan government from selling shares in the company, after the former Soviet Republic nationalized a giant mine operated by the Canadian firm.

After close to two decades of turbulence between Kyrgyzstan and Centerra, the landlocked central Asian state seized control of the Kumtor mine on the weekend, citing safety violations by the Toronto-based miner. As the largest of Centerra’s three gold mines, Kumtor accounts for more than half of its output.

Centerra on Sunday launched an arbitration suit against the Kyrgyz Republic, a legal maneuver that could take years to play out. Late Monday, the company took more immediate action, saying any attempt by the Kyrgyz government to sell its shares would violate an earlier investment agreement. The Kyrgyzstan government is Centerra’s biggest shareholder with a 26-per-cent stake. Last week, it said it was looking to unload 14.8-million of its 77.4-million shares. In a conference call on Tuesday, Scott Perry, the chief executive officer of Centerra, declined to answer an analyst’s question on how the company could prevent a sell order from Kyrgyzstan from being executed in the aftermarket.

Located 350 kilometres southeast of the capital Bishkek, Kumtor is the largest gold mine operated by a Western gold company in central Asia. The site has been in operation since the 1990s, while Centerra’s ownership dates back to 2004. Kumtor has produced in excess of 13 million ounces of gold, employs 2,700 Kyrgyz nationals and is the single biggest contributor to GDP in the country.

Relations between Centerra and the Kyrgyz Republic have been testy for most of their relationship. In 2008, Centerra sought arbitration after it was stripped of several mining licences. Not long after, the miner agreed to steep financial concessions. Relations deteriorated again in 2012, after the government accused Centerra of a barrage of environmental infractions. Another new investment agreement was signed in 2017, which saw further concessions granted to the government. President Sadyr Japarov, a fervent nationalist, has long called for a nationalization of Kumtor. He was elected in a landslide in January, and tensions flared up again in the past few months.

There are few signs so far that the Canadian government is willing to get involved in the dispute beyond a statement expressing “concern” from Foreign Affairs Minister Marc Garneau and International Trade Minister Mary Ng on Monday. The Ministers added that Canada was “disappointed” that Centerra and the government of the Kyrgyz Republic couldn’t work together to resolve their differences.

John Tumazos, mining analyst with Very Independent Research LLC, said Ottawa has “no teeth” when it comes to geopolitical disputes involving Canadian mining abroad. “The Russian and Chinese companies, if they were screwed around like this, the tanks would roll,” he said. “The local despot in Kyrgyzstan couldn’t mess around with them the way he would with these poor polite Canadians.”

The seizure of the Kumtor mine comes amid an intensification in “resource nationalism” overseas. More frontier market governments are seeking improved economic terms with Canadian companies operating within their borders. Alamos Gold Inc. last month launched a $1-billion arbitration suit against Turkey after its government failed to renew a key mining licence. In 2019, the World Bank ordered Pakistan to pay Barrick Gold Corp. and Chile’s Antofagasta PLC US$5.8-billion in damages stemming from an arbitration suit launched eight years earlier. But despite aggressively pursuing payment, Barrick has yet to receive its share of the award. That experience illustrated some of the key drawbacks of arbitration: It can take a long time and there are no guarantees companies will get paid even if they win.

Mr. Tumazos says Centerra should cut its losses and sell Kumtor at a discount to a regional buyer, which is likely to have a more cordial relationship with the government. Centerra has so far ruled out that approach. Analysts have also speculated that Centerra could launch a suit aimed at cancelling all of the shares held by the government, which would help shore its balance sheet by reducing its share count.

With Centerra managers no longer in control of Kumtor, the company is unable to vouch for the continuing safety of the operation. The high altitude open pit Kumtor mine is a particularly demanding mine to run. It is located close to moving glaciers and has experienced pit wall stability issues in the past. In fact, over the past few years, several workers have died in accidents at Kumtor.

Canada ‘very concerned’ about takeover of Centerra gold mine by Kyrgyzstan
Subscriber content
May 18, 2021 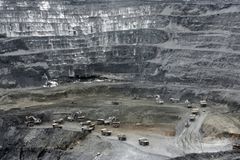 Canada’s Centerra to fight Kyrgyzstan takeover of its gold mine
Subscriber content
May 16, 2021