Financial incentives in transportation legislation passed on Wednesday have triggered the $100-million purchase of rail cars to update the aging fleet of equipment that moves the Prairies’ burgeoning grain crop.

Canadian National Railway Co. said it is buying 1,000 grain hopper cars over two years from a Hamilton manufacturer to refresh its 30-year-old fleet of 12,000 grain cars and better meet the demands of Western growers.

CN did not release a price for the purchase from National Steel Car Ltd., but a person familiar with the matter said the cars cost $100,000 each, valuing the deal at $100-million.

The move marks the first major renewal of the country’s grain fleet in decades and comes as Canada’s largest railway adds new capacity, jobs and hundreds of other rail cars and locomotives to meet rising freight volumes that have congested its network and sparked rebukes from customers and governments.

The announcement on Thursday follows new legislation that altered the rules on the maximum revenue CN and Canadian Pacific Railway Ltd. are allowed to charge grain companies to move the Western crop to ports for export overseas. Under the new rules, a railway retains the full credit for capital investments in the western grain-car fleet, instead of sharing the credit with its rival. The railways said the old rules discouraged rail-car purchases.

The shift is part of Bill C-49, a bill that made changes to laws governing air, marine and rail transportation.

CN said the purchase over the next two years will allow it to phase out some of the smaller cars in its leased and owned 12,000-hopper fleet. The new cars carry 10-per-cent more crops and are shorter in length, allowing more grain to be hauled in the same length of train, which can exceed 200 cars.

National Steel Car said in a statement the CN car orders are creating 550 jobs at the factory, which employs more than 1,500 people. The company did not respond to an interview request.

Calgary-based CP has said it planned to spend $500-million on hopper cars after the new provisions came into effect. In an e-mailed statement on Wednesday night, CP did not provide specifics but said the changes “would promote new hopper car investment and increase grain supply-chain capacity.”

A 2015 report commissioned by the government estimated three-quarters of the 23,000 grain cars on the rails are decades old and will be retired between 2025 and 2030. About 44 per cent of the cars are owned by federal and provincial governments, which have made no investments to expand the fleet since before 1996. Grain company G3 Canada Ltd., which took over the Canadian Wheat Board, owns 1,700 hoppers, the company said recently. The rest are owned by CN and CP.

About half of the Canadian crop of wheat, barley and other grains are exported, accounting for about $20-billion in sales, according to government figures.

Wade Sobkowich, executive director of Western Grain Elevator Association, which represents Richardson International, Parrish and Heimbecker Ltd. and other agriculture companies, said much of the grain fleet is old, prone to malfunction and needs to be scrapped.

“Replacing the cars on a one-to-one basis would add capacity,” said Mr. Sobkowich, who speaks for companies that buy and sell about 90 per cent of Western grain. But he said he was not sure that would happen “because the railways do like to remove assets from the system.”

Annie Joannette, a spokeswoman for Transport Canada, said the government-owned rail cars operated by CN and CP will be retired by 2044, “at which point the government fleet will no longer exist.”

“Under the operating agreements with the government of Canada, the railways will continue to provide equivalent capacity for the cars taken out of service,” Ms. Joanette said. “Transport Canada will continue to administer operating agreements with CN and CP to ensure the federal hopper car fleet is well-positioned to provide capacity until the end of its useful life.”

After several months of rail congestion and rising freight volumes, CN is hiring 1,250 conductors and has raised its capital spending for 2018. Canada’s largest rail carrier is spending $3.4-billion on new sidings, bigger yards and 200 new locomotives to improve its network performance. CN recently said it is buying 350 lumber cars and 350 box cars to serve its forestry and metals customers.

Across North America, railway-car orders more than doubled in the first three months of 2018, compared with a year ago, to 10,300, according to the Railway Supply Institute, a manufacturing group based in Washington. 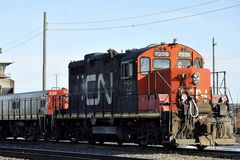 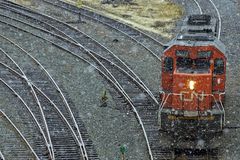