The price of oil pulled back Tuesday after pushing through US$70 a barrel a day earlier, the first time the commodity has cracked that mark in 3 1/2 years, giving struggling Alberta energy companies a badly needed break amidst a recovery in the global energy sector that has largely bypassed Canada.

Oil is climbing as global supplies of the commodity tighten and demand remains robust. On Monday, the price of West Texas intermediate jumped US$1.01 to close at US$70.73. The previous time this light oil benchmark finished higher than US$70 was in late 2014, as the price was collapsing from a peak of more than US$90.

Another important gauge for many Canadian oil producers is the price of heavy oil, which is sold at a varying discount to light oil. Earlier this year, the gap between West Texas intermediate and the domestic heavy oil benchmark of Western Canadian Select was wide, at about US$30 a barrel. That discount on Monday had narrowed to US$15.80, according to oil broker Net Energy Inc.

Oil prices in general rose on questions of supply from Iran, with the United States threatening to reimpose sanctions, as well as continuing problems in Venezuela.

“I will be announcing my decision on the Iran Deal tomorrow from the White House at 2:00 p.m,” U.S. President Donald Trump said in a Twitter post on Monday, in reference to the nuclear accord with Iran.

Mr. Trump has until May 12 to decide whether to reintroduce U.S. sanctions on Iran, which would deal a heavy blow to the agreement.

For Canadian oil producers, there are still numerous issues, starting with a lack of pipeline capacity and a large discount on the price of heavy oil, but the better general outlook for oil is a relief after years of low prices. Higher oil prices offer a bit of breathing room to consider measures such as increased capital spending or bolstering their balance sheets.

The long-standing question of new pipelines still looms but even on this question there is some confidence in Calgary, as Ottawa and Alberta work to get Kinder Morgan’s Trans Mountain expansion under construction, and two other major projects, Enbridge’s Line 3 and TransCanada’s Keystone XL, could move forward.

“We need the pipelines to be built,” said John Festival, chief executive of BlackPearl Resources Inc. “I believe they will get built. There is enough political will.”

The higher price of oil is reflected in the stocks of Canada’s largest producers, such as Canadian Natural Resources Ltd. and Suncor Energy Inc., whose volumes of synthetic oil from their Fort McMurray operations see a greater benefit from higher prices than less valuable heavy oil. Canadian Natural stock closed at $45.30 on Monday, down 38 cents, but the shares are trading near highs previously reached in mid-2008, early 2011, and mid-2014. Suncor, meanwhile, closed at $49.55, up 16 cents. The stock is trading around its highest mark in a decade.

The S&P/TSX capped energy index on Monday closed at 199.34, up 0.41 points. The index is up 3 per cent this year. But unlike Canadian Natural and Suncor, the broader energy sector is still far below past levels. This reflects the more difficult situation for an array of smaller producers, many of them dependent on heavy oil, as well as natural gas. The energy index is mired down about 40 per cent from mid-2014.

Oil analyst Martin King of GMP FirstEnergy predicts West Texas intermediate will remain in the high US$60 range this year and through 2019. He also foresees the price spread between West Texas and the Western Canada Select to settle at about US$20 a barrel.

For Mr. Festival at BlackPearl Resources, higher prices loosen constraints on the small heavy-oil producer. He is looking at paying down debt as well as readying for projects such as expanding its Onion Lake thermal project in northern Saskatchewan near the Alberta border.

The discount of Canadian heavy oil remains a major irritant for Mr. Festival and the Calgary oil patch. “We’re giving that money away to the United States,” he said.

The Fraser Institute, in a report on the question of pipeline capacity set to be released on Tuesday, calculated that the lack of greater pipeline capacity to the West Coast means Canadian producers will lose an estimated $15.8-billion in revenue this year, based on the size of the discount on sales to U.S. refiners.

Mr. Festival said caution remains the prevailing sentiment in Calgary. That said, he believes all three pipeline projects, Trans Mountain, Line 3, and Keystone XL, will happen in the next several years.

The industry awaits pending decisions around Trans Mountain. Ingram Gillmore, CEO of Gear Energy Ltd., said he senses that Canadians in general are coming to see that the lack of pipeline capacity is hurting the country’s economy.

“I’d like to think,” Mr. Gillmore said, “that rational, balanced thinking will prevail.”

Oil faces a month of mayhem as geopolitical risks proliferate
May 7, 2018 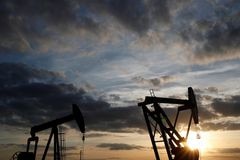 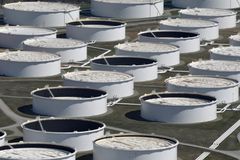