The Progressive Conservative Leader won a majority government in Thursday’s election and among his prominent campaign promises was scrapping the cap-and-trade program established by the provincial Liberals.

If he acts on that pledge, he would create uncertainty among Ontario businesses that have worked for years to prepare for the existing system. It would also set Mr. Ford on a collision course with Prime Minister Justin Trudeau, who vows to impose a carbon tax on any province that does not adopt its own system.

As chair of last week’s Group of Seven Summit, the Prime Minister issued a communiqué that proclaimed a “strong commitment” from the leaders, excluding U.S. President Donald Trump, to implement the Paris Agreement that was concluded by 198 countries in 2015 and aims to avert catastrophic effects of climate change.

Opinion: Which of the two Doug Fords will win out − disciplined leader or rogue premier?

Opinion: Maybe not quite the end of civilization

The Ontario cap-and-trade program is one of several provincial carbon pricing systems that underpin the Canadian commitment to cut greenhouse gas emissions. It establishes individual caps for energy distributors and large industrial firms for their greenhouse gas emissions, and a market for trading emission permits, also known as allowances.

Some of Canada’s largest corporations have participated in the allowance auctions that the province began in March, 2017, including Suncor Energy Inc., Imperial Oil Ltd., Enbridge Inc., Ontario Power Generation and Royal Bank of Canada.

Scrapping the system would require a lengthy and complicated operation as it was enacted by legislation, and involves contractual commitments with business and other governments as well as a secondary market in which allowances are traded.

“There have already been decisions made by organizations around this system and I don’t think there will be an easy way to get out of it,” said Laura Zizzo, chief executive at Zizzo Strategy Inc., which works with companies on climate change.

“It’s much harder to dismantle a market than it is to repeal a tax.”

In fact, the Ontario government is scheduled to issue notice this week of its next auction of emission allowances in August, which it will hold in tandem with Quebec and California under the umbrella of the Western Climate Initiative (WCI).

Over the past 18 months, the province has raised $2.8-billion in six quarterly auctions. By law, that revenue must be spent on climate change-related programs. However, the provincial Auditor-General Bonnie Lysyk has issued scathing reports on the cap-and-trade program, saying it will not be an effective tool for reducing emissions in the province.

Companies are required to hold the allowances until the end of the multiyear compliance period in 2020, and have been spending millions of dollars on that basis.

Under the WCI, a government must give one year’s notice to withdraw, and the new PC government could simply refuse to issue new allowances while signalling to the market that it will overhaul the system.

“It’s going to take at least a year and more likely a year and a half to pull out of cap-and-trade,” said Mark Cameron, executive director of Canadians for Clean Prosperity, which advocates a revenue-neutral carbon tax.

The incoming premier appears to have no plan for how to replace the cap-and-trade, or compensate those who have invested in the system, or make up the revenue that the auctions bring, said David McLaughlin, climate-change director with the Winnipeg-based International Institute for Sustainable Development.

Mr. Ford will face an unpalatable option if the federal government remains determined to impose a carbon levy in any province that fails to adopt its own system. The federal tax will increase to $50 a tonne by 2022, while Ontario’s price is expected to be roughly $25 a tonne due to access to the California market where GHG reductions are cheaper.

But much depends on the fate of a Saskatchewan court challenge of the federal plan, and on the Mr. Trudeau’s re-election bid in 2019.

If the federal Liberals lose either the court case or the 2019 election, Mr. Ford will be free to kill cap-and-trade and replace it with nothing, Mr. Cameron said.

Business groups are watching the renewed uncertainty with some concern.

Canadian refiners and marketers have been among the biggest purchasers of allowances because they have to have permits to cover every litre of gasoline and diesel they distribute. At roughly $18 a tonne, the current price adds about 4.5 cents a litre to the price at the pump.

“We need a clearer understanding of the proposed path forward before commenting,” said Peter Boag, president of the Canadian Fuels Association, which represents the refiners.

Airline companies worry Mr. Ford will jettison the cap-and-trade program from which they are exempt, and that they would instead by saddled with the federal carbon tax which does not exempt the carriers.

“The situation is worrisome,” said Massimo Bergamini, president of the National Airlines Council of Canada. “And it is exacerbated because of the very high provincial aviation fuel tax in Ontario.” 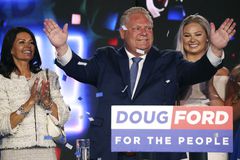 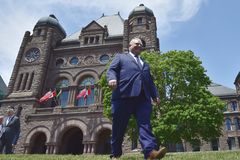